Kenya will have to wait for another one year to reclaim the women’s 10,000m title at the World Athletics Championships that run in Budapest, Hungary, next year on August 19-27.

The nation has not won gold in the race in the last two editions of the global showpiece -2017 London and Doha in 2015 -and lost it on Saturday at the World Athletics Championships in Oregon, USA.

Ethiopia’s Tirunesh Dibaba, who achieved back-to-back wins in Helsinki in 2005 and Osaka in 2007 – and who also triumphed in Moscow in 2013 is the only two-time world champion in the race. Vivian Cheruiyot won the title in 2011 in Daegu, South Korea and regained it from Dibaba inside Birds Nest Stadium in Beijing, China, in 2015.

Obiri said: “I was not under pressure at all. I had prepared well. am happy to exit from the track on a high note.”

As the first individual track final of the World Athletics Championships  wound up into a four-woman sprint for 10,000m gold in the final 100m, Gidey could have been excused for suffering a momentary shudder of deja vu.

Beaten by Hassan’s blistering sprint finishes when it came to the business end of the 25-lap finals at the 2019 World Athletics Championships in Doha and the Olympic Games in Tokyo last year, the world record holder from Ethiopia found the flying Dutchwoman suddenly looming on her shoulder as she entered the home straight.

This time, however, Hassan had nothing left in the tank as Gidey gritted her teeth and kicked on.

Gidey was left to dig in for her for first global gold, holding off two-time world 5000m champion Hellen Obiri in 30:09.94.

It was a cracking finish to a slow burner of a contest that built to a thrilling crescendo, a final sprint securing Gidey the world 10,000m title to go alongside the world record she claimed from Hassan with her stunning 29:01.03 run in Hengelo in June last year.

Hassan took her place on the start line with just that one competitive outing behind her in 2022: a winning 15:13.41 in the Stumptown Twilight 5000m race in Portland on 8 July. Hassan was content to sit four from the back. 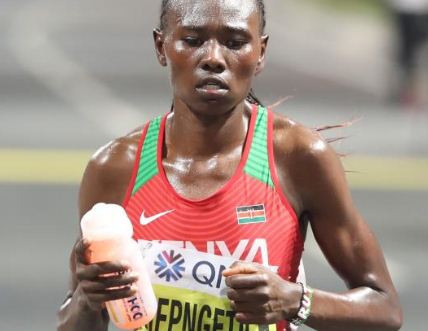