Revealed! Why Tyson Fury wore a 'Nigeria' mouthguard during his win over Wilder

Tyson Fury has already started the mind games with Anthony Joshua, sending a thinly-veiled message to his British rival during his stunning win over Deontay Wilder.

The 31-year-old Briton twice knocked down reigning WBC heavyweight champion Wilder before finally claiming victory in the seventh round when the American's corner threw in the towel.

Fury, a former unified champion who defeated the great Wladimir Klitschko in 2015 before being hit by depression and addiction, has completed a remarkable turnaround and is now a two-time world champion.

It remains to be seen if Fury will fight Wilder for a third time - the pair drew their first bout in 2018 - or give the British fans the fight they want to see against Joshua.

And Fury seemingly had a message for Joshua, deciding to use a gumshield in the colours of Nigeria.

Joshua is proud of his Nigerian background and has recently been in Nigeria instead of watching Fury's fight with Wilder.

Pictures emerged of Fury's gumshield following his win, with the words Nigeria also emblazoned on his mouth piece. 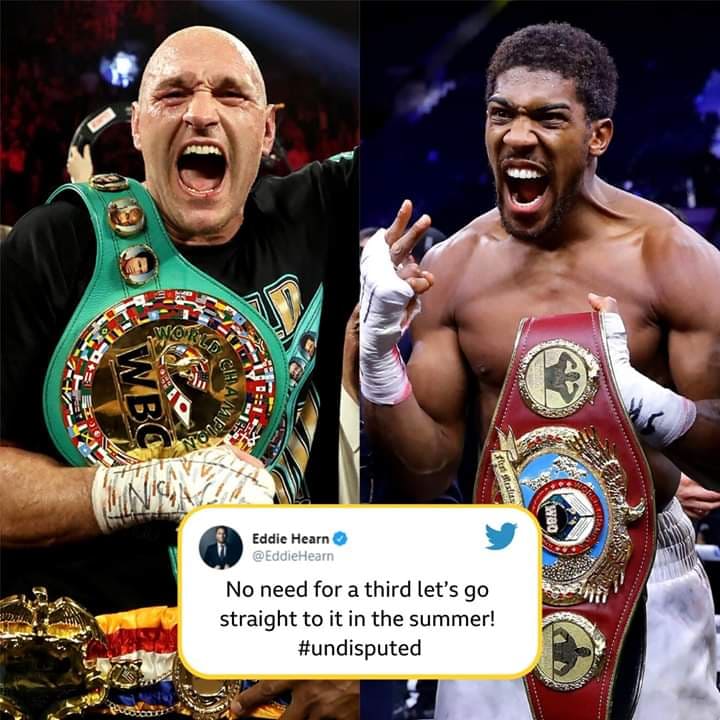 Hearn said on TalkSport: "What a time for British boxing. To have one world heavyweight champion would be great but to have two with all the belts, we will never see it again.

"I have said and I will make this clear, we have to make this fight happen. We will never get the chance for two Brits to fight for an undisputed heavyweight world championship.

"I will promise you we will do everything we can to make this fight happen.

"The first thing is that Wilder has the rematch clause. I don't think anyone wants to see a third fight, it was that conclusive, but we will see if he wants to exercise that. I probably expect Wilder (to take the rematch). I don't see where else he has to go.

"Our mandatory challenger Kubrat Pulev is also promoted by Bob Arum, Tyson Fury's promoter, so there is a very easy manoeuvre there if Wilder doesn't want the rematch to go straight into this undisputed fight in the summer. That's what we have to push for initially."

Southampton forward Djenepo aiming to be better than Sadio Mane