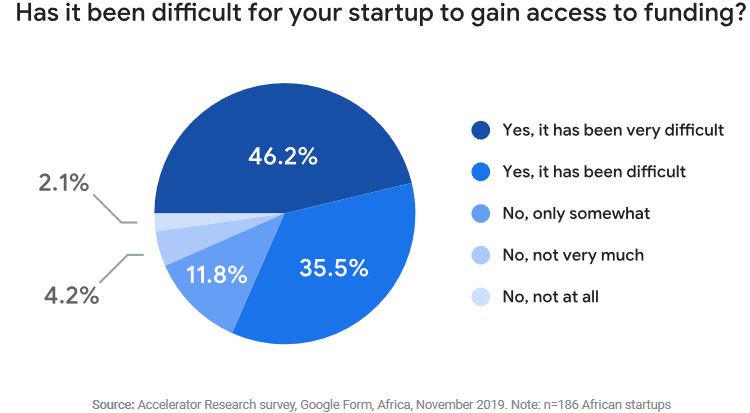 A Google and IFC report dubbed e-Conomy 2020 paints a picture of the hurdles startups undergo in securing funds. Over 80 per cent of respondents agree it is not easy gaining access to funds while only 2.1 per cent haven’t had any difficulty in accessing funds for their startups.

The first quarter of 2020 closed with Sh38.2 billion of total funding, according to a study by Briter Bridges, with South Africa Sh12.2 billion, Nigeria (Sh8 billion), Kenya (Sh6.7 billion), and Egypt (Sh5.5 billion) leading the way as the top funding destinations.

These same countries also collectively received the largest share of funding in 2019.

KRA in another battle with Google, now over taxation

As tech faces a reckoning, what you do offline can get you banned

While January and February funding numbers in 2020 were mostly in line with expectations, March saw 80 per cent drop in funding, as the COVID-19 pandemic reached the continent.

Notable rounds in the first quarter of 2020 are Jumo’s Sh6 billion debt and equity finance round in South Africa, Flutterwave’s Sh3.8 billion round in Nigeria, and Sendy’s Sh2.1 billion round in Kenya.

African startups raised Sh15.6 billion in the second quarter of 2020, according to findings from a Briter Bridges study.
Their study also shows a 60 per cent decrease in quarter two funding from their first-quarter report.

In light of COVID-19, healthtech startups saw some of the largest funding rounds in the second half. In May alone, Ghana’s mPharma brought in Sh1.8 billion while two startups from Nigeria, 54gene, and Helium Health brought in Sh1.6 billion and Sh1 billion respectively.

The full impact of COVID-19 is yet to be realised, and as investors become more risk-averse amid economic uncertainty, the landscape will likely shift away from early- and seed-stage investments and toward companies that are more established and with clearer paths to profitability. 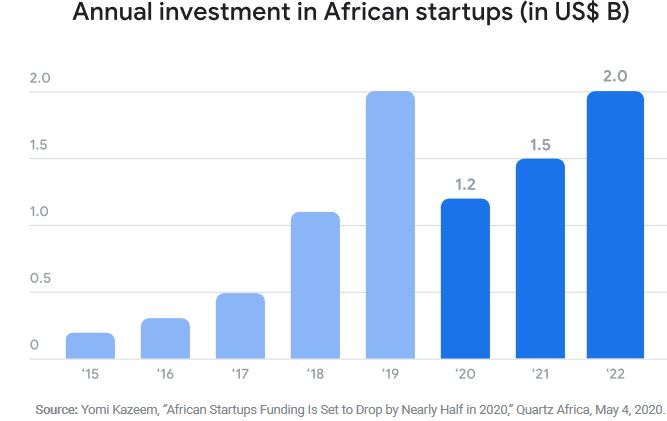 Early estimates by the accelerator AfricArena predict that startups across the continent could lose up to 40 per cent of funding or Sh87 billion this year, with full economic recovery not expected until 2022.

The e-Conomy Africa 2020 report is a unique collaboration between Google and the International Finance Corporation (IFC) which provides a timely analysis of Africa’s current Internet landscape.

The report calls for tech companies, investors, and governments to join in supporting dynamic African entrepreneurs who are driving economic growth, fueled by a fast-growing population of an increasingly urban and educated consumer.

Challenges across the continent

Historically, African startups have faced many challenges in securing funding. Key issues include insufficient seed funding, limited follow-on funding, and a lack of angel investors. Angel investment from high-net-worth individuals is virtually non-existent in some parts of the continent. Some ecosystem stakeholders attribute this to local investors’ risk-averse nature, while others note that unintentional bias skews funding opportunities toward entrepreneurs with male, urban, internationally educated, or expat backgrounds.

Another difficulty is the lack of uniformity in corporate structures across Africa’s 54 countries, which creates challenges in scaling operations across the continent. Because of banking regulations and intellectual property (IP) laws, the speed of business can be painfully slow.

Some measures have been taken to change this. In one such instance, the South African Reserve Bank (SARB) in 2017 implemented IP exchange control approvals to ease the process of getting IP transferred out of South Africa.

Now, certain authorized dealers, in addition to SARB, can grant approvals, reducing the time it takes to process requests by 75 per cent.

Many investors are also unfamiliar with the regional investment landscape and business challenges that startups encounter, such as longer times to exit. Other challenges include incorporating overseas, to help facilitate payments from customers; business growth; and attracting investors.

However, solutions are emerging to simplify the process of getting a startup off the ground, which has helped numerous startups in Africa incorporate their businesses in the U.S., providing easier access to investment funds and the global venture capital markets.

Possible solutions to these hurdles are the new funds being created to address financing needs, especially foreign and local funds that focus specifically on the African startup ecosystem.

According to a study conducted by Crunchbase, there are 51 Africa-focused venture capital funds globally. Just under half of these funds — 22 or 43 per cent — are headquartered on the continent and are managed by Africans. Of these 22, nine are less than five years old.