Manure demand rises as farmers stay away from costly fertiliser

With the high prices of fertiliser and no hope for subsidies from the government ahead of the planting season, some farmers in the North Rift have opted to use farmyard manure.

Fertiliser prices skyrocketed last year, a situation that has been worsened by the Russia-Ukraine war.

Russia is a major producer of potash, phosphate and nitrogen-containing fertilisers, major crop and soil nutrients. The country produces 40 per cent of the potash used in the manufacture of fertiliser.

Maize and wheat farmers across the most productive parts of the South Rift region are preparing to plant their crops even as the prices of farm inputs such as fertiliser and herbicides go through the roof.

Farmers and suppliers say the high prices of inputs could complicate the planting season but are optimistic quick interventions by the State and players in the agricultural sector, may minimise the damage.

The costs of farm inputs have hit astronomical heights and now threaten to affect the county’s food security.

A 50kg bag of fertiliser which was retailing at Sh3,000 is now sold at double the price, with Agriculture CS Peter Munya warning the prices will continue going up.

At Koitebes village in Soy Sub-County, Uasin Gishu, farmers are heaping manure in their farms in preparation for the planting season.

Some farmers have started ploughing before the rains start.

Mr Isaac Kimaiyo is now reaping big from selling manure. The farmer said he had been using the manure from his dairy farm for personal use but is now selling it to farmers.

“The demand for farmyard manure is very high. Farmers from this area and the county at large, including from the neighbouring Elgeyo Marakwet County, have been asking for the manure.”

Mr Kimaiyo makes a lot of cowshed manure which he mixes with his poultry manure for sale. He prepares the farmyard manure and dries it, often covering it with polythene to avoid leaching. The manure is then sold within two months.

Unlike fertiliser, the farmyard manure is affordable, with a lorry going for Sh7,000.

One lorry of manure is enough to cover about four acres, whereas two to three bags of fertiliser is needed for an acre. A bag of fertiliser goes for at least Sh6,000.

According to the farmer, manure is as good as fertiliser and comes with more benefits such as better yields, disease resistance and water retention.

“I have been using manure on my three-acre horticulture farm and it has been nothing short of excellent,” said Mr Kimaiyo, who has also been a large-scale maize farmer.

He said he had no other option than to shift his attention away from maize, which he said was unprofitable.

Mr Kimaiyo said despite the benefits of using farmyard manure, it is only applicable to small-scale farming because it can only be applied by hand. 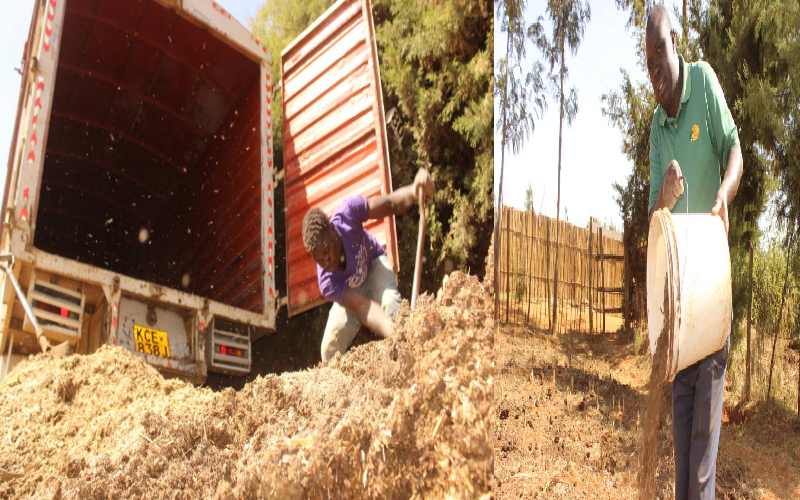 “I will not engage in commercial planting of maize because the input is very expensive while the market prices are low. The 10 acres will be for home consumption and silage.”

Another farmer, Mr Samuel Kuruma, who is also a mixed farmer and has been growing maize for decades, said farmers have been left with no option but to downscale the growing of maize.

Mr Kuruma said the advantage of the farmyard manure is that farmers will not need to top-dress their crops, saving funds. “We have been hoping the government will listen to our relentless pleas and provide subsidies to the local farmers to boost food security. But now that the planting season is here, we have to reduce maize acreage,” he said.

Mr Kuruma said he has been planting 20 acres of maize annually but will only do two acres using farmyard manure from his dairy farm because he cannot afford fertiliser.

Mr Kuruma said although maize prices might be better towards the end of the year, the risk of buying farm input in hope of better prices is not in order.

“Although maize might fetch better prices because of high demand and low supply, this will only be an advantage to very few farmers who can afford fertiliser.

“The majority of us will scale down our farming, a move that will affect the entire country since the country will not be able to feed itself and will rely on imports,” he said.

Mr Sammy Ruto, who has spread farmyard manure on his farm as he awaits the rains, said he could not afford planting seeds for two acres out of the 12 acres he plants on.

“The government has neglected us by choosing to give maize farmers a deaf year. However, we are still hopeful that something can be done in the coming weeks before we begin planting,” he said.

North Rift: Government steps up war against banditry, to deploy more personnel
Rift Valley
By Betty Njeru
59 mins ago
Premium Our son has made us proud, Wafula Chebukati's parents speak
Western
By Martin Ndiema
3 hrs ago
KWS: Why vasectomy on Nairobi lion was best decision
National
By Brian Okoth
3 hrs ago
Elderly man inflates hospital bill to get extra cash from children
NEWS
By Collins Kweyu
4 hrs ago
.