Machinery breakdown at Kibos Sugar Company has left hundreds of sugarcane farmers in Kericho County stranded with their harvest at a local weighbridge.

The farmers produce over 4,000 tons of sugarcane, which is 60-70 per cent of sugarcane produced in the Nyando region that comprises Kericho, Nyando, and Kisumu County.

There is no sugar factory in Kericho after the collapse of Soin Sugar factory.

In a letter dated August 27 signed by Kibos Sugar Harvesting and Transport Manager, the company indicated that it suffered a major breakdown involving the turbines and asked the farmers not to transport any cane until further notice.

“You are requested to move any loaded tractors packed at the weighbridge yard to any neighbouring factory,” the letter reads.

Andrew Bett who is one of the prominent farmers in the Soin ward argued that the notice from the sugar company over the breakdown leading to the closure of the sugar factories came at a time when farmers had already harvested the cane from their farms.

“The notice came at night. Already over 50 tractors loaded with the sugarcane at Kipsitet weighbridge yard,” said Bett.

Bett, a Member of the Sugarcane Federation said the neighbouring factories such as Muhuroni Sugar factory mill around 1,500 tons of sugarcane and therefore can’t take up all the sugarcane produced.

“The other option which is Chemelil Sugar Factory has constant machine breakdowns and owes farmers huge debts,” he said.

“Though it has its clients, the sugar factory has been able to lift about 400-500 of sugarcane from Kipsitet weighbridge which farmers would have other not have anywhere to take,” he said.

But even Kericho farmers are stuck with over 150 tons of sugarcane in the yard. This is besides acres of mature cane still in the farms.

Dr Wilson Soi, a sugarcane farmer from Soin ward pointed out that it now takes up to three days for his cane to get to alternative factories after harvest.

“The breakdown in Kibos Sugar Factory will lead to a backlog of unharvested sugarcane,” he said.

Solomon Cheruiyot, who manages a fleet of tractors belonging to the farmers, said the drivers and loaders are now forced to idle at the yard and factories for approximately two weeks at the expense of the farmers.

“Besides the salaries, it cost around Sh6,000 in two weeks to buy meals for the drivers and the loaders because of the slowed-down offloading system,” he said.

Bett pleaded with governor Paul Chepkwony’s administration to bail out the farmers.

“Agriculture Cabinet Secretary Peter Munya is aware of the situation in Muhuroni and Chemeli Sugar Factory but we are shocked that he is yet to do anything about it,” he said.

“The Government must be compelled to compensate the sugarcane farmers and transporters. Failure to which, we will encourage the farmers to move to court to seek redress. The rights of farmers and consumers must be protected,” she said.

Waruguru, nonetheless assured the farmers that the sugar bill currently in Parliament will sort the mess in the industry once and for all.

“We sorted out the tea farmers through the Tea Act, We will do the same for sugarcane farmers before the end of the year,” she said.

Melly called on governors in sugarcane growing counties in rift valley led by Governor Paul Chepkwony and his Nandi counterpart Stephen Sang to establish a sugarcane factory in the region.

“Farmers from the two counties are the ones who produce 60 per cent of sugarcane produced in Lake Region Economic Block (LREB),” said the Tindiret MP.

Bett called on the counties to reject the Lake Region Economic Block advisory that the establishment of a sugar factory in Kericho is not viable.

“Kisumu County under governor Anyang’ Nyong’o who is the Lake Region Economic Block chairman has three sugar factories, Kericho has none yet we produce over 4,000 tones of sugarcane which is adequate to establish a sugar factory,” he said.

Kenya Kwanza parties step up fight to clinch Bungoma Senate seat
Politics
By Robert Amalemba
5 mins ago
MPs plot to get CDF cash from Treasury after hitting a brick wall
National
By Edwin Nyarangi
15 mins ago
Premium GMOs not the solution to drought, hunger in Kenya
FEATURES
By Edwin Wanjawa
25 mins ago
Chiefs laud plan to give them firearms as ODM leaders say public consensus is necessary
National
By Clinton Ambujo and Daniel Chege
45 mins ago
.

By Biketi Kikechi 55 mins ago
Premium Can return of feared chiefs stop bandits in the North? 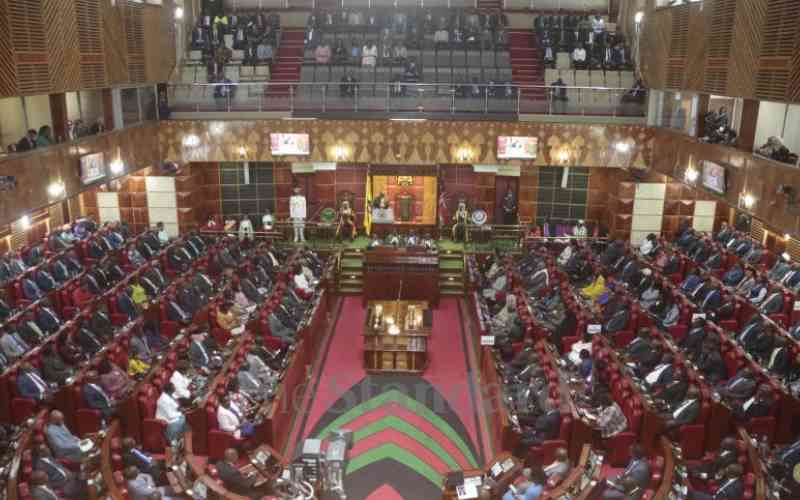