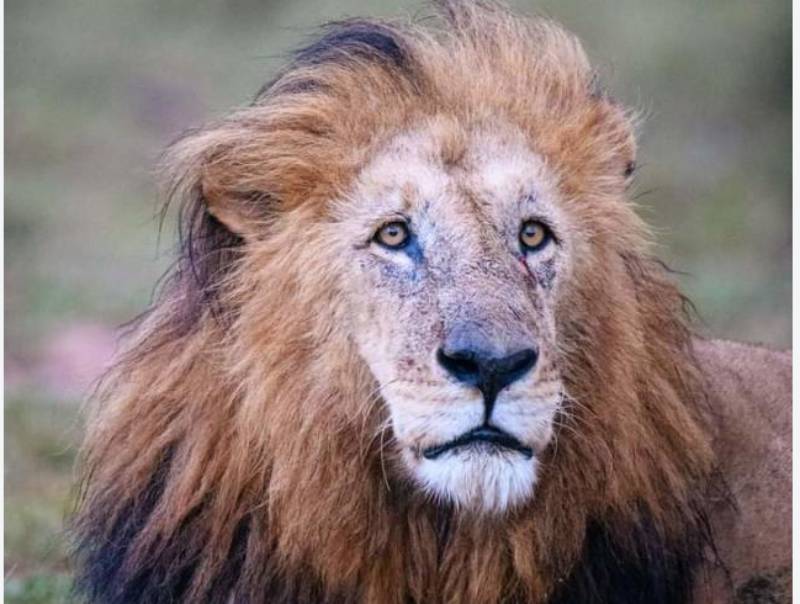 Maasai Mara Game Reserve is mourning the oldest and iconic lion nicknamed “Olorpapit” who died of old age after a 16-years reign in the jungle.

According to the Chief Park Warden James Sindiyo, the patriarch had been weak for the past few years and his situation was worsened when he was attacked by younger territorial young lions a few weeks ago.

“It’s true we are celebrating the life of the iconic lion Olorpapit who has been ruling the Enkuiyani pride for the past 16 years. It died of old age on Wednesday evening at Olare Motorogi Conservancy. It was a celebrity lion that was a darling to tourists,” said Mr Sindiyo.

The Park Warden described the iconic male as the most dominant together with his younger brother “Orbanoti” who is also estimated to be aged around 14 years have been shuttling between Enkuiyani, Oldikdiki, Monika and Hamercop prides where their lineage is spread.

As soon as word went around that the famous lion had rested, hundreds of international tourists and wild cat lovers who had interacted with the lion poured their tributes.

Lucy Johnson, a veteran wildlife photographer who posted on a Facebook page known as the “Big Cats of Masai Mara” r said that the lion died peacefully and with dignity.

“With great sadness, one of the Masai Mara famous lion king, Lorpapit of Enkuiyai pride passed away this afternoon of old age at the border of Olare Motorogi Conservancy. He died in peace and dignity,” read her condolence message.

She said that since August, when his condition started worsening, it was brought to the attention of park management. He received treatment from vet and his condition was monitored closely by rangers of both reserve and conservancy.

“He passed away 300meters from rangers’ post, I reckon because he felt safe here, and in his last days, he was accompanied by his brother Olbarnoti,” said Ms Johnson.

She says she was there when the incident happened and had a chance to say goodbye to the magnificent lion, which she says, she has been following and photographing for the last 6 years.

“He was 16 years old that is a full life for a lion in the wild. Rest in Peace, my King!” she saluted.

Another tourist Ms Marie Linke recalls spotting the iconic lion for the first time after her engagement with her partner Maxim last year.

“In memory of the old warrior Lolpapit, we had the pleasure to meet him right after our engagement and he will always be part of that magical memory,” said Marie.

The Park Warden told The Standard that the unique lion with a dark mane was well taken care of until when he ‘rested’.

“He has been frail for the better part of the month. We called the KWS vet who treated him and he has been doing well till he died peacefully in his sleep. We are glad he managed to survive for the last decade and a half in the ruthless jungle as the king,” said Mr Sindiyo.

According to African Lions Fact, an online lion platform, in the wild, the lifespan of lions is approximately 15 years. however, in captivity, it can be as long as 30 years.

Human-wildlife conflict, loss of habitat, illegal trade of lion products, and lack of a clear compensation on livestock are cited as major factors that will see the “king of the jungle” get extinct in the next 20 years.