Pain, anguish as Nakuru businessmen wake up to trail of destruction

Businessmen in Nakuru who had invested heavily on leased Kenya Railway land woke up to a trail of destruction along Geoffrey Kamau Way after government invaded the land on Sunday morning to reclaim it.

Despite several pleas by the traders who were paying a whopping Sh50 million annually to the state corporation as rent, the notorious green government-excavator known as ‘Sany’ descended on the buildings at 1 am.

The excavator from the National Youth Service (NYS) flattened restaurants, shops, petrol stations, night clubs, matatu Sacco offices, car wash and car bazaars that had thrived on the property for the past ten years.

According to the affected traders, the operation that started at 9pm was supervised by the Rift Valley Regional Coordinator George Natembeya when hundreds of security personnel were deployed to the scene.

“Senior administration officials supervised the demolition. They refused to hear our pleas,” said a Mr Towett, who is one of the investors affected. 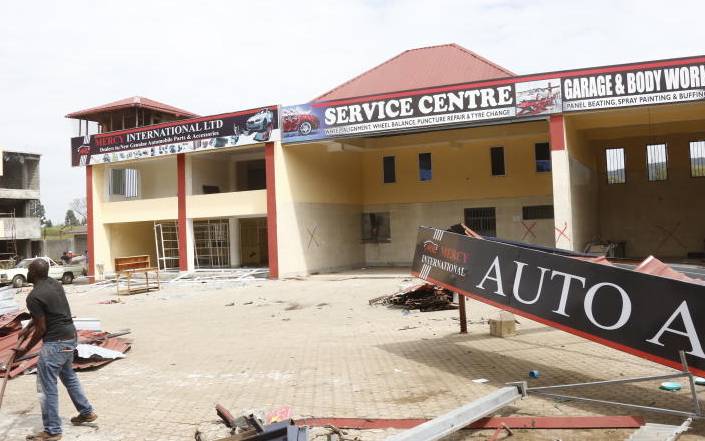 Mr Natembeya said they had instructions from Kenya Railways to provide security after the traders failed to heed to a notice issued three months ago.

“Ours was to provide security to Kenya Railways to demolish the structures that had encroached on the narrow gauge railway that is currently under rehabilitation,” said the administrator.

Early on Saturday afternoon, a number of the traders operating on the land had managed to remove movable items from the premises after government officials marked the premises with huge letter X and told them they had until 8 pm to move out of the land.

One of the investors, Mohammed Suraw, told the Standard Digital that Kenya Railway was not aware of the order to have them evicted

“I have spoken to senior Kenya Railway management and none seem to know where the eviction order came from. We have been faithful tenants paying our dues to the corporation on time. We should have been treated much better than this,” said Suraw, a former Nakuru town mayor.

The Standard Digital has independently gathered that the land in contention was leased out to six investors for 25 years.

The lease was signed in 2018 paving way for the investors to put up business premises that attracted more than 300 traders. Suraw said businesses opened in the area included shops, restaurants, boutiques, night clubs, petrol stations and other ventures. They had an estimated value of more than Sh500 million.

The former civic leader said although the property belonged to the Kenya Railways; their businesses did not in any way encroach on the railway lane.

Nicholas Kiarie, another investor said the demolition has led to the loss of about 3,000 jobs that had been created there.

“The demolition is a big blow to us as investors and more so to families that depended on the businesses that we established here. Total revenue generated by the leases is approximately Sh50 million payable to Kenya Railways annually. The county government has also lost revenue running into millions in terms of licenses that we pay to them,” Kiarie said.

Kiarie who operated a popular night club at the demolished site said it was regrettable that as they were recovering from the effect of Covid-19, the government decided to demolish their businesses.

“How does the jubilee government expect to curb unemployment and stir up the economy that has been battled by Covid-19 by demolishing businesses?” he posed.

Businesses cry foul after their premises were demolished in Nakuru

Courts back to normal operations after Covid-19 scale down

The JSC has recommended that both digital and physical platforms to be used so that cases can be prosecuted without delay to avert backlogs.

By Faith Kithure | 3 days ago