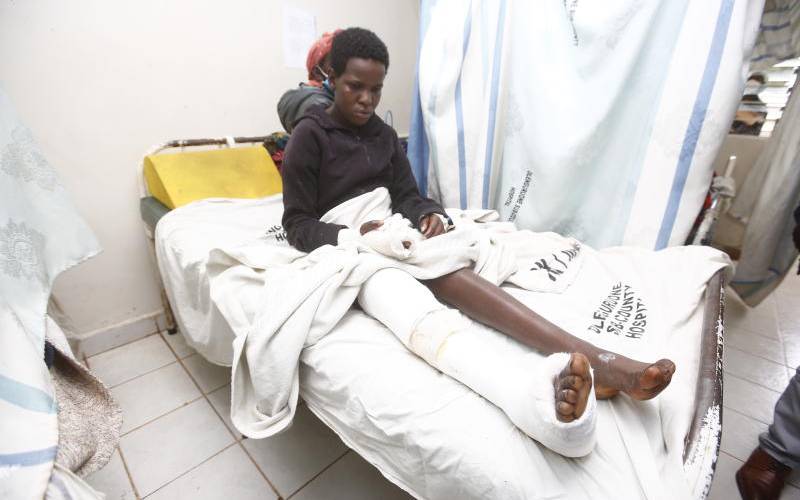 Mercy Cherono, 21, counts herself lucky to be alive.

She stares at a harrowing video clip showing a policeman dragging her from a motorbike across the streets of Olenguruone town and then bows her head and breaks into tears.

With tears rolling down her cheeks, Cherono (pictured) tells the harrowing story to The Standard team from her hospital bed at Olenguruone Sub-County Hospital where she was admitted after the brutal attack.

" I don't know how I survived this," she says, as she hands over the mobile phone containing the video clip to a member of the team.

A video that has been circulating on social media shows Cherono being dragged in the streets in an incident that occurred last Sunday.

Cherono, a mother of one, said a policeman attached to the local police station tied both her hands on the motorbike and started dragging her through the tarmac road claiming she had stolen from him.

Police authorities in the sub-county deny her claims saying she was attacked in a mob justice incident.

Olenguruone Sub-County Hospital Superintendent Solomon Bera confirmed the woman had a broken leg and soft tissue injuries on the arm with a wound on the head.

"I believe the victim is very lucky that she is still here with us. The attack was brutal," Dr Bera said.

"She has been very distressed about the attack, the attack was unprovoked and because of the seriousness of it, obviously she is very disturbed and she is fearful of retribution,” he said.

According to Cherono, the officer claimed that she had broken into his house and stolen a laptop and clothes.

"The policeman suspected I was among people who broke into his house and stole the items that Sunday morning. He said I had to be punished as he dragged me around, " Cherono said.

The officer allegedly picked Cherono outside her rented house in Olenguruone town where she was relaxing.

"I could not resist. I accompanied him and we joined another group of people that was standing on the roadside," she recalled.

In the presence of the crowd, the policeman removed a rope from his motorbike, tied both of my hands and attached the rope to the bike.

And for the next 200 meters, the officer who was riding the motorbike dragged her along before the crowd intervened.

As seen in the one minute, 30 seconds video clip, Cherono was pleading for mercy as the officer was riding the motorbike.

The video shows her being dragged on tarmac while on her stomach, as the crowed wailed.

"I pleaded for mercy but the officer couldn't hear none of that," she said, adding that in the process her clothes were ripped off.

Cherono said the officer hit her leg with a club, demanding to know where she had taken the items.

"All this time I was not aware of the crime I was being punished for," she said.

She was taken to Olenguruone Police Station where some officers suggested I be taken to hospital for treatment.

All this time Catherine Cherotich, her watched her daughter suffer in disbelief.

Cherotich said she could not imagine the brutality her daughter underwent.

She said the officer should have arrested her daughter and have her arraigned if indeed she stole.

"Why did the officer want to kill my daughter? all I need is justice be served," said the mother.

Nakuru County Woman Representative Liza Chelule condemned the incident saying the police should have taken legal action against the woman instead of brutalising her.

"The police should have taken the lady to the station, book her and commence investigations. Brutalizing her is barbaric and against police regulations," she said.

The lawmaker said police should protect the lives of the people and property even in instances of mob justice.

"Police must treat suspects with dignity during arrests. Courts are there to decide the fate of suspects and not officers taking the law into their own hands," Chelule said.

She called for immediate action against the officer having contravened the law, vowing to raise the matter in parliament.

Area OCPD Henry Nyaranga said he was informed that Cherono was attacked by a mob and not the police officer.

"Records at the station show that the lady was a victim of mob justice contrary to claims that she was attacked by an officer. The report says she was found stealing from a house belonging to one of my officers." Nyaranga said.

He said investigations into the incident had been launched to establish the actual circumstances that led to her sustaining the injuries.

By Robert Kiplagat | 14 hours ago