Lush fields as guns go silent in valley of death 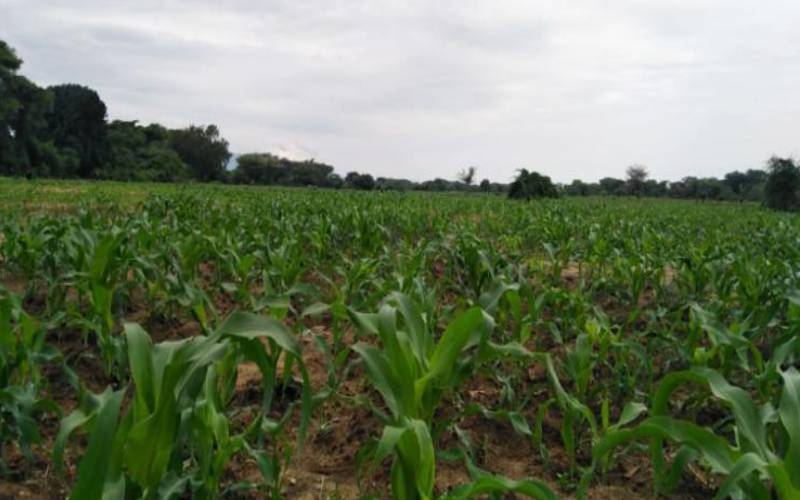 Selina Namongo hums a traditional song as she weeds her maize farm along the volatile Kainuk area in Turkana County.

She is among hundreds of residents of Turkana South Constituency who are now farming after months of armed conflict occasioned by banditry and cattle rustling.

“A time like this last year, no one would walk on this land, but the song shows my happiness for the peace we are enjoying now and for the anticipated plentiful harvests. Our barns will be full in the next two months and there will no hunger this time around,” says Namongo.

“Occasionally this piece of land is a battlefield. Hundreds of people have died here as a result of armed conflict, but now we are savouring the proceeds of peaceful co-existence after a recent disarmament exercise.”

The infamous battlefield known for massacres is now Koputiro irrigation scheme, which covers over 100 acres. It is thriving crops such as maize, beans, green grams, millet, sorghum, cow peas, bananas, pawpaws, watermelons and a range of vegetables.

Residents have taken advantage of the ongoing downpour to do crop farming away from the traditional cattle keeping that has been the cause of banditry.

Residents are now optimistic they will produce harvest food and a surplus due to the heavy rains and the fertility of the soil.

“Our dependence on relief food from the Government and donors would reduce as we expect surplus produce unlike in the past,” says Namongo.

The 45-year-old and a mother of four says paying school fees and footing bills  has been a challenge in the past since she did not have a stable income.

“When bandits attack, we usually abandon our farms but since the guns were mopped up last year, we are optimistic of bumper harvests which in turn would allow us to pay bills. We shall also better our lives,” she says.

Farmers are not the only ones basking in glory. The interlude of peace has heralded increase in the herders’ stock as Peter Mariao from Loyapat says.

He says his herd of livestock has doubled because they can now graze freely without any fear of a bandit attack.

“Loyapat area has a dark history for it was a banditry route, making residents along there depend on relief food. But the situation here is now vibrant because we are in the farms,” says Mariao.

To Ebenyo Kawarnaparan, a university graduate still seeking a job, farming has offered an opportunity to look for income as the Covid-19 pandemic has made job searching difficult.

“I grow vegetables and tomatoes, which I sell to the locals around as well as supply to Lokichar and other areas.  It pays well and I am even considering expanding my farm to make more money,” he says.

At Kakong sub-location where the Turkana County government and GIZ have partnered to initiate a project that utilises flood waters for farming, reformed warriors and residents who initially practised pastoralism have embraced farming and joined efforts to make the semi-arid area food secure.

“After abandoning the cattle theft vice, I am now a farmer and my family has never lacked food. The peace has given us a different perception to life, and we have fully embraced it,” says reformed warrior James Ekiru.

Turkana Agriculture executive Chris Aletia says they have increased acreage under irrigation and the county administration has so far facilitated the ploughing of 40,000 acres for crop production in different parts of the county.

Aletia says the department has accelerated farming activities, despite setbacks caused by the desert locusts that have destroyed several farms in Turkana East Sub-county.

“We are determined to harvest large water and direct it to about 15,000 acres of land strategically being ploughed near seasonal rivers for planting drought-resistant sorghum and maize intercropped with cow peas,” he says.

Aletia says the county is supporting villagers in flood prone areas to prepare land with tractors whose services are subsidised.

Locals said Ms Kiptoo was being chased by the police during a crackdown on illicit brew in the area.