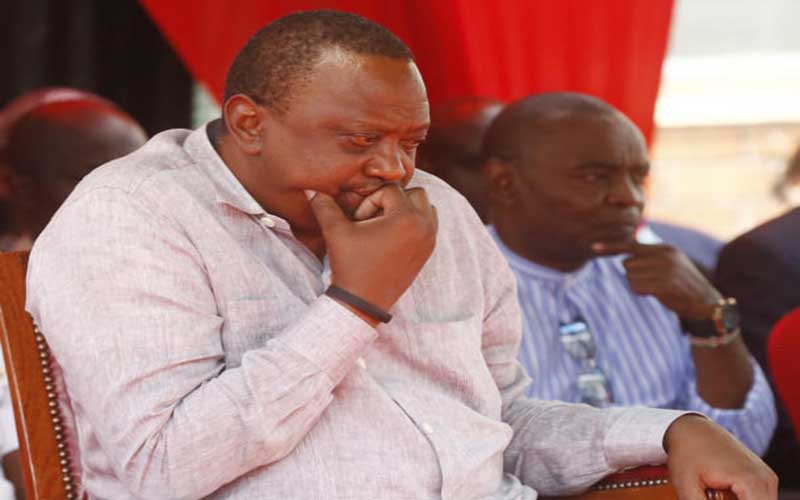 President Uhuru Kenyatta (pictured) appears determined to chart a different political path away from his deputy William Ruto and engage directly with voters in the Rift Valley region.

Details of the new political arrangement came out in the open after a meeting held at the Kenyatta’s Gicheha farm in Nakuru County on Tuesday last week.

The meeting brought together some 300 leaders and businessmen from Nakuru County led by Governor Lee Kinyanjui.

In the four-hour meeting convened immediately after a section of Jubilee Party parliamentarians were locked out of a State function in Nakuru town, the President is said to have outlined his plan, which will no longer involve renegade  Jubilee MPs.

The goodies Uhuru has in his bag from the DR Congo

Earlier in the day at the Rift Valley Regional Commissioner’s office where Uhuru dished out 2,000 title deeds to members of the Kiambogo Nyakinyua women dance troupe, Senator Susan Kihika and Nakuru Town East MP David Gikaria were denied access to the venue.

The two are among elected leaders from the county said to have defied the President’s directive not politic about presidential succession that has left Jubilee Party sharply divided and the Deputy President isolated.

Details on the agenda of the meeting, which was a highly guarded secret, continue to emerge, with those who attended disclosing that the President warned that it will not be business as usual for those fond of political bickering.

“The President said he is tired with waking up every day to see elected leaders crisscrossing the country engaging on the succession debate. He declared that he was fully cutting ties with them unless they change their ways,” said an elder who attended the meeting.

President Kenyatta reportedly said he will no longer have to involve leaders in areas where he visits or holds a meeting as his interest is delivering service to all, not a select group.

“He told us not to be surprised when we see local leaders left out of his meetings. He said he will now directly work with Kenyans rather than elected leaders whose interest is chasing personal political ambitions,” the elder added.

Kihika and Gikaria are diehard supporters of Ruto and have been leading the Tanga Tanga entourage across the country supporting his presidential bid in 2022.

The President had made almost similar sentiments while addressing members of the Nyakinyua Traditional Dancers in Kikuyu dialect during the state function.

“Allow me to be coming to places like this on my own and do what you expect from my government. Forget about those who are going around campaigning. They won’t suck me into their gimmicks,” a source quoted Uhuru saying.

Another elder said the President was particularly angered by a section of Mt Kenya leaders who have shown him total disrespect while those from the Rift Valley region remained respectful to Ruto.

“It is a fact that Mt Kenya leaders have been insulting him in public. He has an issue with this habit. He pointed out that Rift leaders had issues with his Deputy but had not disrespected him (Ruto) as much,” said the elder.

A Member of the County Assembly who sought anonymity for fear of reprisal disclosed that during the meeting, the President warned that he would not yield to blackmail on the future of Kenya’s politics.

“The President expressed his anger with certain leaders whom he said have been blackmailing him to declare his stand on the 2022 succession,” said the MCA.

Nakuru Governor Lee Kinyanjui was however reserved to comment on the meeting saying it was private.