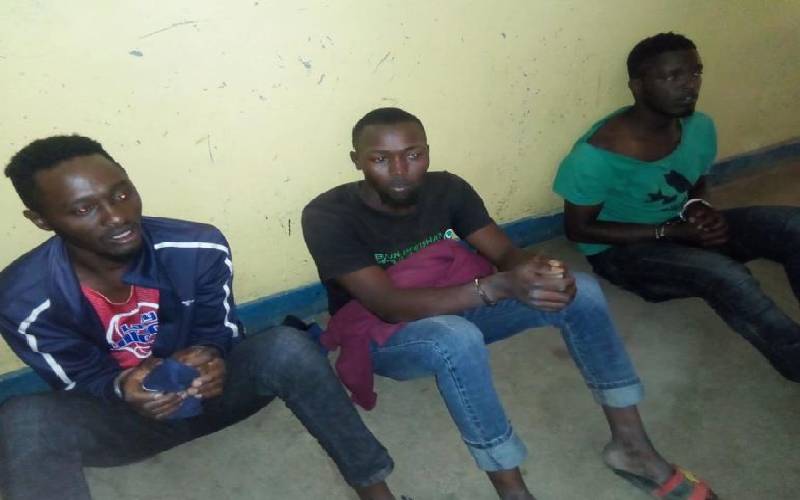 Police have arrested three men who tried to force their way into a British Army camp in Nanyuki on Sunday.

The three were captured on CCTV cameras at the camp and their images circulated, prompting police officers to launch a manhunt.

“They unsuccessfully tried to get into the British Army Training Unit in Kenya (Batuk) camp earlier in the day and were arrested near the Nanyuki police station later in the day,” said Laikipia county commissioner Daniel Nyameti. He said the suspects were not armed.

The men in their 20s are said to be from Nyandarua, Rumuruti and Machakos.

Miungi weathers the storm to triumph in Nanyuki event

They were booked at Nanyuki Police Station and later handed over to the regional Anti-Terror Police Unit in Isiolo for further interrogation.

Batuk Nyati camp is located on the Nanyuki-Rumuruti road in the outskirts of Nanyuki town. It is situated next to Laikipia Airbase after its relocation from the Nanyuki Agricultural Society of Kenya (ASK) showground.

At least four terrorists were killed in the raid that came a week after the US Embassy in Nairobi issued a warning that a terrorist attack was imminent in Kenya.

Al Shabaab claimed responsibility for the 4am attack at the camp established in 2004 to serve as a US Forwarding Operating Location (FOL) centre for training exercises with Kenya Naval Special Forces.

It is also a base for US Special Operations Force (SOF) in Somalia. Nyameti said the security team was wary of any suspicious characters in a garrison town that hosts several security installations, including Laikipia Airbase, the British army and several Kenya Army battalions.

The two male suspects aged 40 and 31 were arrested on Sunday evening at a roadblock in Barnabas area on the Nakuru-Nairobi highway.

“The two were handed over to the ATPU officers and were found to be illegally in the country,” said Mr Analo.

He said the suspects claimed they were travelling to Nairobi to seek treatment at Kenyatta National Hospital, where they had been referred by medics at the camp.

The two, however, lacked referral letters, and neither did they have movement documents from the United Nations High Commissioner for Refugees. They also lacked clearance letters from refugee secretariat. They claimed to have forgotten the documents at the refugee camp.

“The special police investigating team is liaising with refugee camp secretariat, Immigration Department and UNHRC to get more details about the aliens,” he said.

By Kennedy Gachuhi and Julius Chepkwony | 1 day ago