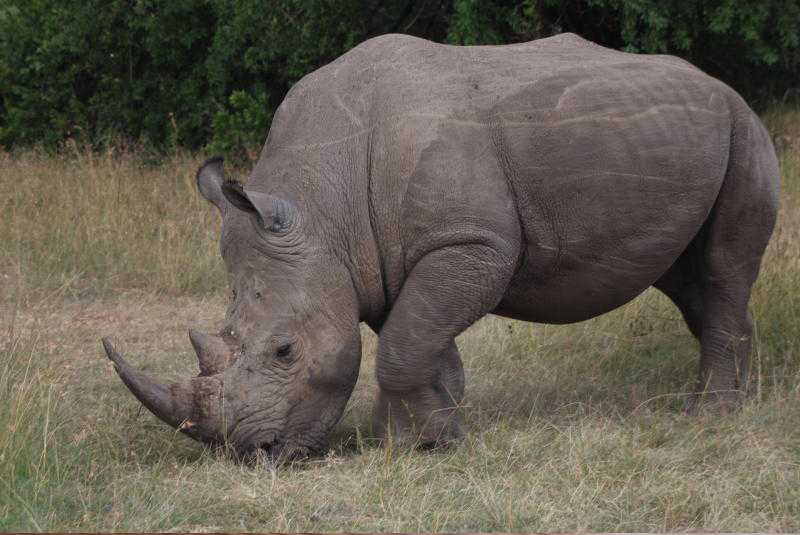 Three black rhinos have died at the Mara Triangle in the last week.

Kenya Wildlife Services (KWS) spokesman Paul Gathitu said carcasses of three black rhinos were reported between 12th to 19th November, which is the north-western part of the Maasai Mara national reserve managed by Mara Conservancy on behalf of the Narok County.

Gathitu said KWS provides an oversight role and technical support in the management of wildlife in the reserve.

"Rangers from the Mara Triangle sighted the carcasses while on routine patrol in the expansive wildlife reserve. On November 12, they identified carcass belonging to a male rhino christened ‘Sairowua’. It was among the oldest rhinos in the conservancy and had been observed to be in good health a few days earlier," Gathitu said.

He said the KWS mobile veterinary unit was called in and requested to do a post-mortem.

"The carcass, estimated at five days old, was extensively decomposed, scavenged and dismembered. All the soft tissues and internal organs were missing having been scavenged, leaving only a shell of skin and bones," he said.

Gathitu said there were no injuries observed on the remaining parts of the skin and bones and its teeth  were worn out, a condition he said is usually associated with old age.

"Both the anterior and posterior horns were present, but detached from the body. Owing to the advanced decomposition and scavenging, the post-mortem could not determine the possible cause of death," Gathitu said.

At 37 years, Gathitu said it is possible that the rhino could have died of natural causes attributed to old age. There were no viable samples that could be collected for laboratory analyses, adding that skin tissue was collected for DNA analysis and banking.

"On  November 16, Mara Triangle rhino patrol team came across the second carcass about four kilometres  from the first case, which was identified as belonging to a female black rhino christened Naiteru," Gathitu said.

"No external injuries were detected on the partly scavenged carcass estimated to be two days old though the scene had signs of struggle before death. The skull, brain and all other organs appeared normal. The rhino was gravid with a male foetus estimated at eight months. The foetus was fresh and possibly died soon after the mother died," Gathitu said.

"Given that the rhino shared the same territory with the first case, environmental samples from areas of common use (salt lick) were collected and have been submitted to the Government Chemist as well," Gathitu said.

Following the discovery of the two rhino carcasses, he said, personnel with aerial support were deployed to do a complete reconnaissance to locate and confirm the status of rhinos in the area.

"It was during the exercise that the carcass of a young male rhino christened ‘Kantai’ , though it had not been ear notched, hence did not have an identification number, was discovered not very far from the carcass of the mother, in the afternoon of  November 19," Gathitu said.

A team from KWS headquarters veterinary department joined hands with the resident veterinarian to carry out an autopsy and collect relevant samples.

By Gilbert Kimutai | 3 hours ago