Kalonzo Musyoka rules out joining William Ruto, vows to be back after five years

By Josphat Thiongó | 4mos ago 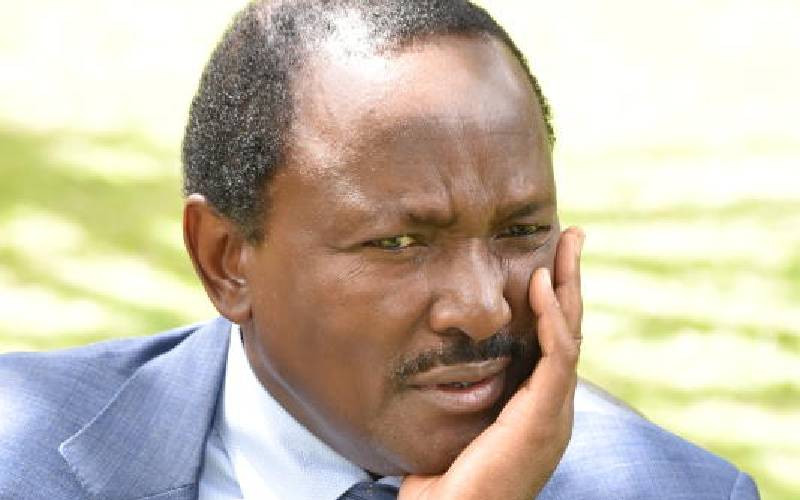 Wiper Democratic Movement Leader Kalonzo Musyoka yesterday congratulated President-Elect William Ruto, but added that they will be back in five years.

Speaking for the first time after he withdrew from the Senate Speaker's race, Kalonzo said although it is painful, five years is a short period of time and that for the sake of stability. The Wiper leader also clarified that he was not joining Kenya Kwanza adding that he is ready for the opposition leader because the sitting government must be kept in check.

"We do not agree with the Supreme Court decision but respect the decision Five years is not a long time, we will take the pain of being in opposition bitter as it is and pray God to give us strength," said Kalonzo yesterday at burial ceremonies in Yatta, Machakos, and Mwingi Central, Kitui.

Kalonzo insisted that he had not given up his dream for the top seat and he was just taking time off to restrategise.

“I am taking a strategic retreat, but I remain focused on the bigger picture, sometimes in life you have to pull back and think of the next move,” said Kalonzo.

The Wiper leader's political future has been under sharp focus especially after he missed the Senate Speaker's position. Kalonzo’s decision to withdraw from the Speaker's race – which ultimately worked in favour of the Kenya Kwanza faction cast uncertainty on his future.

A former Vice President, Minister of Foreign Affairs and presidential candidate, Kalonzo had cast his dice in favour of Raila Odinga in the just concluded Presidential race, whose win would have gifted him the Chief Minister position in line with the Azimio la Umoja One Kenya coalition agreement.

But after Azimio's defeat, he set his sights on the Senate Speaker position where he to battle with former Kilifi governor Amason Kingi. His name would, however, not make it to the ballot after he withdrew on D-Day, handing Kingi a decisive win.

He explained that his withdrawal from the speaker contest was premised on advice from Wiper party members and the top brass. In last month's elections, Kalonzo’s party managed 23 MPs, 19 constituency-based MPs and four Woman Representatives – at the National Assembly and three Senators.

Political pundits now argue that whereas Kalonzo’s window to be part of Ruto’s government is seemingly closing, his is a decisive moment that will have a ripple effect on his future and 2027 presidential ambitions.

“Kalonzo must now consider a move that ensures he remains politically relevant. Despite the idea of closing ranks with Ruto and working together being alluring, he must consider whether it’s the path that leads to actualisation of his grand plan of possibly one day leading this country,” said political analyst Tom Mboya.

He warned that it would be premature for Kalonzo to ditch Azimio without a clear plan of engagement with Ruto. President-elect Ruto had in his pre-election campaigns vowed to absorb Kalonzo into his government should he emerge the victor.

He had also “come to the defence” of Kalonzo who Raila had insisted must go through an interview for role of the Azimio running mate position. Ruto averred that for a man who stood with Raila since 2013, his subjection to an interview would amount to ridicule not only on Kalonzo but on his entire community.

Prof Edward Kisiangani opines that the only way Kalonzo would build impetus for a stab at presidency in future is by going it alone and not folding to join Kenya Kwanza government.

“Kalonzo should ensure while Ruto forms government, he also forms a formidable opposition to keep the Government in check. This betters his chances of politically standing as his own man and rising to be next in line for the presidency,” said Kisiangani.

The pundits agreed that for Kalonzo to be considered a presidential prospect he needed to shed the tag of an Ukambani leader and be seen to enjoy support from across the country.

Kalonzo delivered approximately one million votes in this year’s General Election. By throwing his weight behind Raila, he saw that the latter got 769,985 votes in the counties of Kitui, Machakos and Makueni while his support from the Ukambani diaspora bases pushed the vote to a million.

The jury is still out on whether Kalonzo’s Wiper party will join Ruto's side or maintain its place in the Opposition.

By Dennis Kabaara 1 hr ago
Premium A better take at Huduma Namba is not short-term fix for Kenyans
.