The declaration by presidential candidates Raila Odinga of Azimio and George Wajackoyah of Roots Party that they will boycott today’s presidential debate has elicited mixed reactions, with questions emerging on the importance of the discourse.

While the organisers argue the debate is “for the people and not the candidates”, the civil society has termed Raila’s and Wajackoya’s decision as disappointing.

The Head of Presidential Debate Secretariat, Clifford Machoka, says such a discourse offers an opportunity for Kenyans to engage in issue-based politics, as opposed to political rallies that many voters do not attend.

“In a country with diverse voices, the debate brings clarity of issues from what we see in campaigns. It allows voters to make informed decisions and offers the opportunity to hold leaders accountable for what they say,” said Machoka.

Formal political debates are not new in Kenya. Kenyans witnessed the first two-round presidential debate on February 10, 2013, and the next a fortnight later.

It was the first political discourse of its kind that limited politicians from the “us versus them” rhetoric – normally spiked with mockery and political slurs directed at their opponents – and created a space where the politicians could speak to issues bedeviling the electorate without sideshows.

In the 2013 presidential debate, all eight candidates were in attendance and they discussed land issues, foreign policy and the economy.

With the country having a history of the political class mobilising and dividing voters along ethnic lines, the question of the role of ethnicity in politics opened the floor.

It is not mandatory for any candidate to appear for the debate. Following the first round of the 2013 debate, President Uhuru Kenyatta (then deputy prime minister) threatened to snub the second round, with the Jubilee presidential campaign secretariat accusing the moderators of deliberately allowing other candidates to escape public scrutiny over various national scandals that had characterised their political careers.

Uhuru was hard pressed to disclose how many acres of land the Kenyatta family owns and how he would fairly address the land issue if elected.

In 2017, President Kenyatta chose to give the debate between him and Raila a wide berth.

On today’s debate Raila Odinga Presidential Campaign Secretariat Spokesman Makau Mutua said the Azimio la Umoja One Kenya flagbearer would not participate in a process he claimed his opponent William Ruto had tried to influence to be devoid of questions on corruption and integrity.

“He is a man who has no regard for ethics, public morals or shame. That is why we do not intend to share a national podium with a person who lacks basic decency,” Prof Mutua said in a statement.

Prof Wajackoyah, on the other hand, is against dividing aspirants into two tiers, saying this is bias and aims to isolate some candidates.

The civil society termed Raila’s decision an outright betrayal of the efforts of pro-democracy activists like George Anyona, who suffered in the hands of the government while fighting to tear down Kanu’s one party rule.

“With many Kenyans cynical and 15 per cent still undecided, issue-based dialogues are fundamental for restoring the power of the vote for millions,” said Amnesty International Kenya Executive Director Irungu Houghton.

Mr Irungu said the presence of all presidential candidates arguing out issues on one stage and in a civilised manner is a statement of a mature democracy and any candidate pulling out at this stage is ill-advised.

“This Presidential Debate is not a duel between politicians, or a televised debate watched by 34 million people. These debates are how us, as voters, listen to all ideas and choose those who come to lead us.

“They are the starting point of rebuilding national public accountability and the leadership integrity of all candidates,” he said.​

Seen as a sign of a mature democracy, the debate has also grown in great strides. Compared to the 2013 and 2017 debates, this year’s discourse expanded to include running mates of presidential aspirants and a Nairobi governor candidates’ debate – all of which got a stellar reception.

“The debates allow us to move away from the rally format and raise the profile of the conversation. This in turn gives the audience the opportunity to compare the submissions of the aspirants,” said Irene Kimani, a member of the Presidential Debate Secretariat.

Unlike the 2013 debates, which hosted all eight presidential candidates on the same stage in a three-and-a-half-hour marathon, this year’s regulations, similar to those in 2017, divided the debate into two tiers informed by the candidates’ popularity based on recent opinion polls.

In 2013, despite the debate receiving overwhelming praise as a result of its maiden execution, there was criticism over having all candidates debating at once, with many saying it was too cumbersome and difficult to follow.

“We decided to work with this format because it allows us to delve deeper into issues and allow every candidate to have adequate time to tackle the issues,” said Ms Kimani. 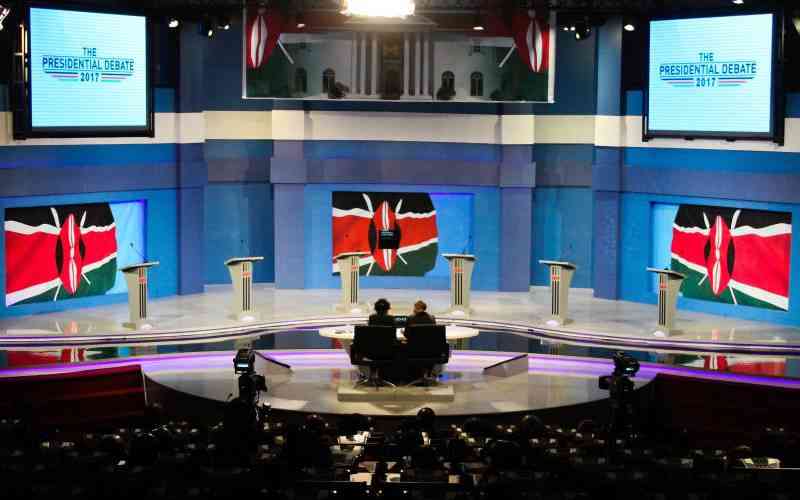 Twenty-four diplomats to attend presidential debate
Azimio’s secretariat spokesman Makau Mutua said their candidate would be having a town hall meeting with the electorate at Jericho Social Hall, Nairobi instead.
Politics
By Esther Muchene
2 months ago 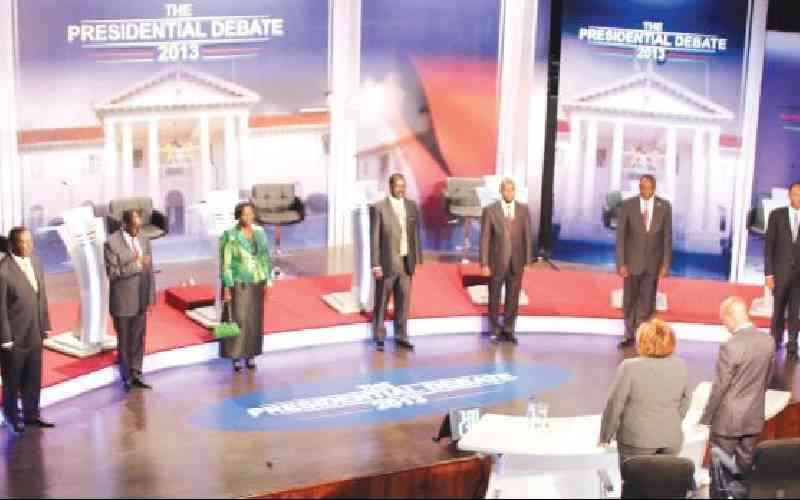 Why presidential debate is not a duel between politicians
These debates are how us, as voters, listen to all ideas and choose those who come to lead us. They are the starting point of rebuilding national public accountability.
Houghton Irungu
By Washington Onyango
2 months ago
.