Speaking in Murang’a yesterday, the DP and the Mathira MP told voters to rally behind UDA candidates in the August 9 General Election.

“I need foot soldiers who I will work with to protect your interests and they must be elected on a UDA ticket,” Mr Gachagua told the crowd.

Dr Ruto said: “I urge you to vote for a UDA governor and other candidates.”

There are 16 affiliate parties in the Kenya Kwanza Alliance.

In Murang’a, there are three governor candidates whose parties are affiliated to Kenya Kwanza.

Governor aspirant Irungu Nyakera is the chairperson of the Farmers Party of Kenya, which has at least 28 candidates eyeing elective positions, including Senate and woman representative.

Former Water Principal Secretary Irungu Wairagu is vying for the county’s top job on a Democratic Party ticket. Democratic Party has been an affiliate of Kenya Kwanza until a recent court ruling quashing its membership in the alliance.

In a move seen as a strategy to prevent split of votes, Kikuyu MP Kimani Ichung’wa mentioned all the UDA candidates in Mathioya during the rally.

Reacting later to the remarks, Mr Nyakera, a co-principal in Kenya Kwanza, said he read malice in the move.

“During negotiations we agreed that we will be equal partners and all candidates will be treated in the same manner.

“I was utterly shocked to hear our captain popularise UDA candidates as opposed to letting the locals decide. This is utmost deceit and conmanship and must be looked at before it is too late,” he said.

The Farmers Party of Kenya (TSP) chairperson warned that if Dr Ruto and other Kenya Kwanza Alliance principals do not address the issue, it could trigger voter apathy where their supporters may only turn out to vote for aspirants for other elective posts and not for president.

“My supporters were angry and even threatened to vote for the Azimio leader... others may not vote for president and this must be addressed,” said Mr Nyakera

Dancun Njuguna, a candidate in Gitugi, termed the move by UDA leaders treacherous.

“That is against the spirit of the coalition agreement signed between ANC and UDA. Ruto is shortchanging us the way he was shortchanged by the president and makes no difference between them,” he said.

“They should let Kenyans decide and not plan on their behalf, they must relax and wait for the election outcomes,” said Mr Njuguna.

He claimed that UDA aspirants are weak and fear that the election of candidates of affiliate parties may be interpreted to mean that Mr Gachagua is not effective, which is not the case.

“Gachagua must understand that he is the deputy captain of Kenya Kwanza coalition and should not perpetuate division in the coalition,” Mr Njuguna said.

On Sunday, while addressing residents in Eldoret town, Dr Ruto asked the electorate to vote for UDA candidates and shun those from other parties and independent candidates. 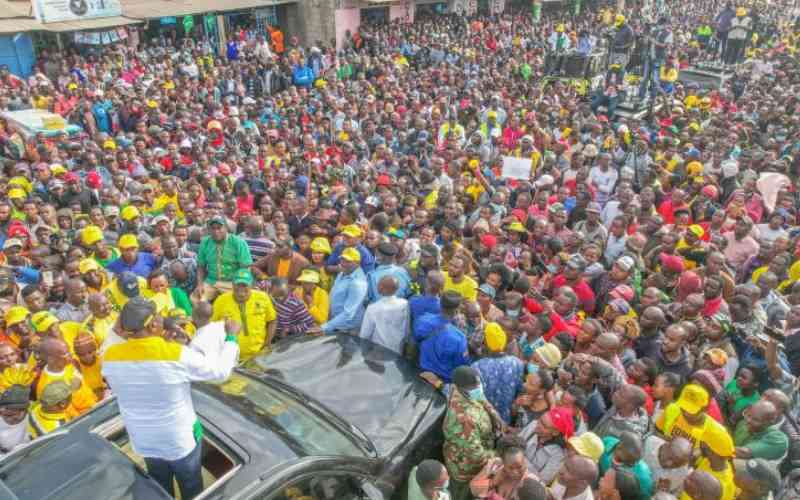 Calls for six-piece voting by UDA irks other candidates
William Ruto’s running mate, who was leading the campaign team, urged the locals to vote for UDA candidates.
Politics
By Julius Chepkwony
10 days ago
.

By Allan Mungai 2 hours ago
Ruto's plan: Winner or ammunition for rivals?

By Phares Mutembei 2 hours ago
Premium Uhuru Kenyatta says William Ruto failed in his duties as DP, allies fight back