What is the Wiper party leader, Kalonzo Musyoka up to? Is he a master tactician, tough negotiator, steely ruthless politician or an indecisive leader.

Seemingly reluctant to make every political move, Mr Musyoka has proven to be a headache for President Uhuru Kenyatta and ODM leader Raila Odinga and has literally dragged Azimio la-Umoja One Kenya coalition into unenviable positions that has left them begging for his support.

From holding Azimio at ransom and delaying its unveiling for eight hours to changing its name, talks of going it alone in the elections, and a declaration that he would not attend interviews for running mate candidates, only to appear before the panel yesterday, Mr Musyoka seems to be playing a political game he only understands.

Ninety days to the General Election, the Wiper leader is turning out to be a quiet, but major decisive factor in who succeeds President Kenyatta come the August 9, General Election.  Mr Musyoka who is the Ukambani kingpin that has about two million registered voters once again finds himself in a place where he could play kingmaker.

With the gains and losses in his nearly four decades in politics, and particularly the recent series of missteps in which he has lost the presidency and DP position twice, the Wiper leader is now more calculative, assertive and ruthless. His decision to blow hot on the running mate issue and his ceaseless demands is causing ripples in Azimio.

After the death of the National Super Alliance (NASA) Mr Musyoka had repeatedly said that he will be on the presidential ballot and will not step down for anyone after being Mr Odinga’s running mate in the 2013 and 2017 elections.

In the August 9 General Election, he has to get it right this time around if he is going to remain relevant post-Kenyatta presidency.

Yet, with Mr Odinga enjoying wider acceptance, including an endorsement by President Kenyatta, the Wiper leader has mastered the art of piling pressure to have his demands met.

And for this, Mr Musyoka has often been the target of derision for his political ambivalence and his nickname ‘watermelon’ but he has refused to be written off and could be the nexus between other political kingpins and the presidency.

Using a multi-pronged strategy the Wiper leader is putting his bets in different matches. The Wiper Party National Executive Council (NEC) meeting on Monday unanimously endorsed a proposal that Mr Musyoka ditches Azimio and runs for the presidency.

The NEC also asked the Wiper leader not attend the interviews for running mate candidates by the selection panel.

The Wiper leaders thereafter engaged county coordinators to collect signatures to endorse Mr Musyoka’s presidential bid to be presented to the Independent Electoral and Boundaries Commission (IEBC) in line with election laws.

In Nairobi the Wiper leader has succeeded in having former Kibwezi MP Philip Kaloki picked as the running mate for Azimio governor candidate Polycap Igathe while in Mombasa he has fielded former Nairobi Governor Mike Sonko, after prevailing upon Kisauni MP Aly Mbogo to surrender the Wiper governor ticket and take up the running mate post.

“We have already covered 12 counties of the 30 that we are targeting, we will have a National Management Committee today to ensure that all the required signatures have been completed to clear the way for the party leader to contest for presidency in August,” said Makueni Senator Mutula Kilonzo Jnr.

Kilonzo Jnr said that they did not expect Mr Musyoka to attend the selection panel interviews and they expect him to brief them on what changed after the NEC meeting that had advised against the same.

Should he contest, will he manage to create a wave? What are his intentions in running? Already Mr Odinga and Dr Ruto have put their best foot forward and are front runners.

“Even if he comes at number three, he will have a significant influence that will have him in a post-election coalition with whoever wins on August 9,” said an NEC member who sought anonymity.

Should he decide to go to the ballot, Mr Musyoka’s decision will have huge political ramifications for Kenya Kwanza and Azimio.

But the effect will be felt in Ukambani where leaders from other parties are feeling the heat from his push for zoning of the region in favour of Wiper. And yesterday, Mr Musyoka attended the selection panel interview after vowing not to. “I did not want to give anyone an excuse whatsoever to say that aligoma kuja (he refused to come),” he said.

Later, the Wiper leader flew out to Southern Sudan before departing for the Democratic Republic of Congo for a week-long private visit.

“I’m grateful for the warm reception from South Sudan Deputy Minister of Foreign Affairs Hon Deng Dau Melik, Kenyan Amb Maj Gen (Rtd) Samuel Nandwa upon our arrival in Juba early this afternoon. Our primary engagement will be on the ongoing Peace Process, most notably, the unification of the military,” he said after arrival at Juba airport.

“I was shocked, we did not expect him to appear, we are already charting a different course,” said Mr Maanzo.

“All our aspirants at Maendeleo Chap Chap will be on the ballot. My party is supposed to grow, there are some pushing for zoning to bar our party from growing,” he remarked.

“If the idea of wiper’s negation with Azimio is to throw the community under the bus by denying people a chance to pick the leaders they want at the grassroots, I feel that its a big departure from the ethos set out by our leader Mulu Mutisya,” said Mr Waita.

The tension between Wiper and CCU stems from the wiper leader’s push for zoning in Ukambani.

“Electorate in Machakos do not want anything to do with six-piece voting, they want to pick their own leaders, they don’t want to be handed a fait accompli………..where deals are made in boardrooms,” he said.

Makueni Governor Kivutha Kibwana last week accused the Wiper party leader of making it impossible for him to be in Azimio.

“It is proving impossible to work with Kalonzo Musyoka in Ukambani. After he joined Azimio, he has wanted us top leaders from Ukambani out of all Azimio structures. I have no choice but to be at peace with this sad reality. History will ultimately judge all of us. May it be kind to Raila Odinga,” said Prof Kibwana.

The governor said that winning elections is about numbers. “Let all political parties that genuinely support Raila be welcome in the coalition and campaign for Azimio,” said Prof Kibwana.

Interestingly, while Mr Musyoka is pushing for zoning in Ukambani, Wiper has fielded governor candidates in Taita Taveta, Kwale, and Mombasa. 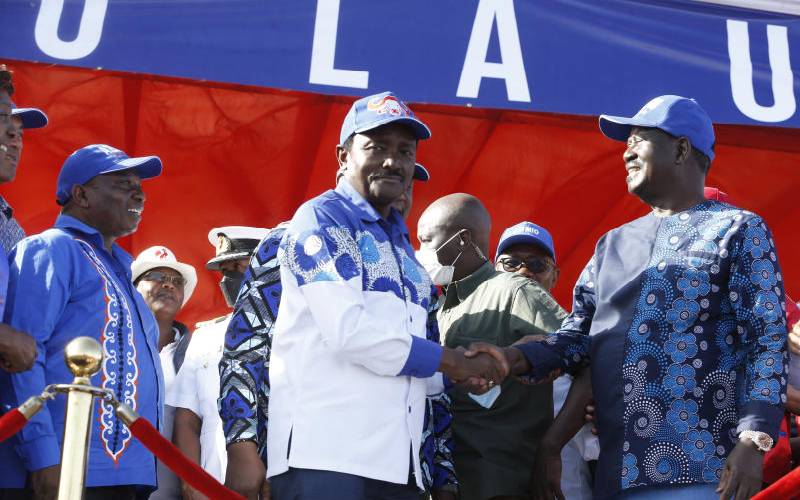