His long-awaited move to team up with Azimio La Umoja-One Kenya presidential nominee, Raila Odinga, was received with excitement at Nairobi’s Jacaranda grounds on March 12th, this year.

To date, however, the Azimio fraternity is yet to get an opportunity to fully celebrate the Wiper Party leader Kalonzo Musyoka’s arrival – thanks to relentless demands, hard-line positions, and endless boardroom battles.

Ideally, what has largely been deemed a political masterstroke ahead of the August presidential poll and a biggest poll scare to Deputy President William Ruto and the rival Kenya Kwanza brigade, has quickly evaporated into a political smokescreen in just under two months.

Today, the giant Azimio outfit with a galaxy of political stars including President Uhuru Kenyatta, Raila, Kalonzo, former presidential candidates, Charity Ngilu, Martha Karua and Peter Kenneth among others is on the verge of squandering its apparent advantage to the Ruto-led team that comprises Amani National Congress (ANC) party leader, Musalia Mudavadi, National Assembly Speaker, Justin Muturi and Tharaka Nithi Senator Kindiki Kithure. At the center of the Azimio crisis are two main conflicting positions involving what Kalonzo’s critics consider as a selfish push for the running mate slot and on the other hand what Kalonzo’s supporters regard as manoeuvres by Raila’s arrogant operatives to elbow aside their leader from the “Raila government”.

Ayub Savula, the deputy party leader of Democratic Alliance Party of Kenya (DAP-K), one of the 26 Azimio member-parties, describes the friction at hand as one between “the self-centered interests of an individual and those of selfless individuals united in delivering victory to Azimio”.

Since teaming up with compatriots in Azimio, Maendeleo Chap Chap (MCC) party leader Alfred Mutua separately claims that the coalition has known no peace: “We were gelling well and everything was moving right on the campaign front. However, my senior brother has terribly slowed down the campaigns, and now everything is suddenly about himself and what he must get.”

Admittedly, to most supporters of the former Vice President, his presence in Azimio is largely about his political positioning ahead of 2027 and addressing “past political injustice”. Makueni Senator Mutula Kilonzo Jr, for instance, points out that Kalonzo has over the years sacrificed his ambition in favour of Raila and others and that this time around he will not succumb to any political blackmail.

“What is disconcerting is that there is even a thought of picking a running mate to please a restless Mt Kenya region. Raila should stand with those who stood by him and Mt Kenya should be comfortable to support Raila without a DP slot. It is time for them to sacrifice like others have done,” says Kilonzo Jr.

The dust raised over Kalonzo’s stand notwithstanding, Makau Mutua who is the spokesman of Raila’s presidential campaign, is more cautious and optimistic.

He flatly rejects the assertion that the Wiper party leader is a headache within, arguing instead that Kalonzo is simply trying to raise his own stakes in Azimio.

“The DP slot is the second most powerful public office in the land and a heartbeat away from the presidency and any ambitious politician would covet it.

We expect Mr Musyoka to be a team player and to fully campaign for Raila, as he himself has repeatedly said, whether he’s picked as DP, or not. I take him at his word,” Prof Mutua told The Sunday Standard.

While Prof Makau’s argument on the question of ambition holds water, it is in the manner in which Kalonzo is pushing his case that is reportedly irking partners. Two days ago, for instance, the Wiper party leader embarked on a campaign tour of the coastal region, to boost former Nairobi Governor Mike Sonko’s gubernatorial bid in Mombasa.

Besides ruffling feathers within Azimio, particularly the Orange Democratic Movement (ODM), some observers view the move as politically imprudent.

Political analyst Dr Henry Wabwire, for instance, argues that unless Kalonzo primarily wants play dirty or attract the attention of colleagues within Azimio, fronting the candidature of Sonko will not give his Wiper party victory.

“Considering his networks and connection with the ordinary Nairobi resident, the Wiper party and the larger Azimio coalition requires Sonko’s services more in the Capital City than in Mombasa. He doesn’t have to be on any ballot, but he is more useful in Nairobi where the DP is making steady inroads, by mobilizing votes for the Azimio parties and its presidential candidate,” observes Dr Wabwire.

In the meantime, Kalonzo and the three governors of Machakos, Kitui and Makueni, Mutua, Charity Ngilu and  Kivutha Kibwana and engaged in a fierce supremacy battle in their Ukambani backyard. The battles have created major rifts with Mutua destined to proceed to court to exit from Azimio.

The MCC party leader squarely blames Kalonzo for his political woes accusing him of stifling democracy within Azimio. According to Mutua, his party has been operating in good faith but this has not been reciprocated, hence the decision to exit “to give Kalonzo space”.    The MCC party leader is partly unhappy with Raila, for not coming to his aid against alleged harassment from the Ukambani kingpin. Savula told The Sunday Standard that the Azimio fraternity was equally unhappy about the emerging rifts in Ukambani since Kalonzo teamed up with Raila and Uhuru in March.

“As the most senior politician from the region, he is more useful to our collective cause by uniting the leaders of Ukambani instead of doing the opposite. Judging his actions, Kalonzo is knowingly or unknowingly working in the interest of Ruto,” claims the Lugari MP.

And the apparent support that Kalonzo is enjoying from the Kenya Kwanza team led by Ruto and Ford-Kenya party leader, Moses Wetangula, who have lately pushed his case for appointment as Raila’s running mate does not help the situation either. The two have protested the act of the former Vice President being subjected to a vetting process arguing he was most qualified to be Raila’s running mate.

Their action indeed begs a host of answers. Just what is their hidden interest in Kalonzo and Azimio affairs? Isn’t it curious too that they are trying to field players of a rival team in a match against themselves? Alternatively is this a case of reverse psychology at play?

Only fools knowingly play into the net of opponents, and Dr Wabwire observes it is unlikely that Azimio will make the mistake of handing to Kenya Kwanza rivals their fervent wish of having Kalonzo named as nominee for the position of Deputy President.

Ideally, the notion of Kenya Kwanza facing off Azimio with Kalonzo as running mate, partly fits their political matrix as this can enable them easily fix the former Prime Minister at the ballot. This would allow Ruto to opt for Musalia as running mate and hopefully seal off the western Kenya region, which is a vote base currently shared by both the former deputy PM and Raila.

In a way, therefore, a Kalonzo running mate for Raila is politically more strategic and beneficial to Kenya Kwanza than Azimio, which partly explains why Ruto’s lieutenants are relentlessly pushing the Wiper party leader’s case. And the possibility of Raila not appointing a running mate from Mt Kenya region is the desired move by Ruto to similarly skip the region by looking west, considering that he currently enjoys a huge following in Mt Kenya region. This is however an experiment that Raila’s handlers cannot allow to happen.

The selection of Musalia as Ruto’s running mate would spell doom for Raila’s bid, considering the western Kenya region is traditionally one of his support bases. According to Dr Wabwire, Raila must therefore hang on to a running mate from Mt Kenya region for two main purposes – to scramble for the available votes and minimise the possibility of Musalia getting the nod as nominee for DP.

Yet still, the Kenya Kwanza brigade could be playing mind games with Azimio by publicly endorsing Kalonzo with the hidden agenda of the Raila-led team settling on someone else other than the Wiper party leader. Kalonzo enjoys a fairly firm political hold on Ukambani region, having delivered well at the ballot in the past two presidential races as Raila’s running mate. Kalonzo himself has distanced himself from the unsolicited support from Ruto and his allies stating on Friday that the move was aimed at causing him disfavor among peers in Azimio, “because they know that a Raila-Kalonzo ticket will send them home.”

Kilonzo Jr supports this view arguing that the UDA brigade “are just dancing around a fire to give an impression they are supporting Kalonzo”. Their action, he opines, is a ruse to win sympathy amongst supporters of Kalonzo.  Prof Makau too believes the DP is simply playing smart because he is allegedly scared of the many quality choices that they have for the slot of running mate: “That is why he is meddling in our affairs in panic.  In Azimio, we are good to go. Otherwise, friction is normal in any large coalition like ours as folks settle down and find their footing. We have no worries”.

However, noting that no principal assistant of a sitting President in Kenyan history has ever assented to power – except Daniel arap Moi owing to the death of President Jomo Kenyatta while in office –  Savula urges Kalonzo to be flexible by dropping his running mate demand.

“This is not how to become President, and Kibaki and Uhuru who ascended to the throne from the positions of Opposition Leader and Deputy Prime Minister know better. All you need it so position yourself strategically,” reacts Savula.

The vocal two-term MP proposes a post-poll settlement for Kalonzo as Prime Minister: “Let him settle for that if he is truly a team player and allow us to have a running mate from Mt Kenya region. I mean we must woo this community from the rival camp’s hold to comfortably win this race.”

But Kilonzo Jr warns: “Let me be honest with you. The Wiper brigade has supported Raila wholeheartedly as Kalonzo has put his bid aside for him. Any formula that excludes Kalonzo will have serious consequences on the ballot. We know it and they know it.”

Although there is no legal room for Wiper to pull out of Azimio as per the coalition deed, the Senate Minority leader says legally nothing can impede the political rights of a people under the Constitution. 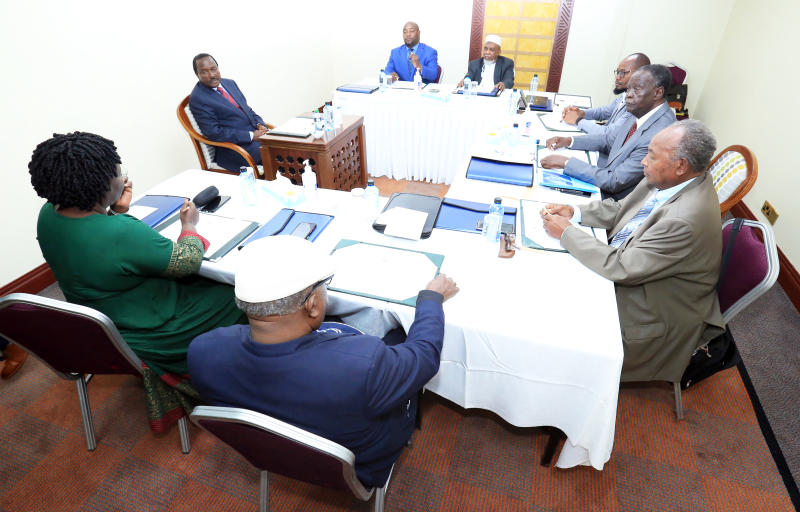 Premium Kalonzo Musyoka's political cards keep leaders guessing ahead of polls
What is the Wiper party leader, Kalonzo Musyoka up to? Is he master tactician, tough negotiator, steely ruthless politician or an indecisive leader.
Politics
By Jacob Ng’etich
1 month ago
. 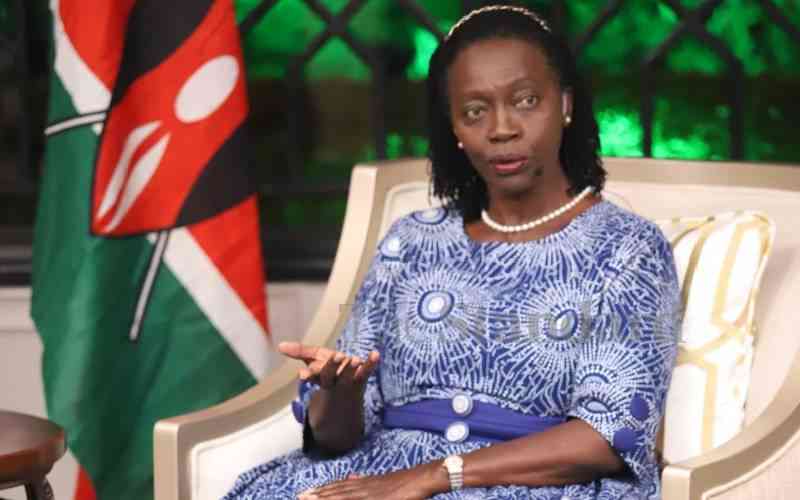 By Too Jared 3 3 hours ago
Lay claim to both successes and failures of Jubilee, Karua tells Ruto

By Edwin Nyarangi 3 12 hours ago
What next for politicians who stepped down for nominations?

By Sharon Owino 3 13 hours ago
Wajackoya: A win for me or Raila is victory for western Kenya

By Judah Ben-Hur 3 15 hours ago
Premium Tongue control: Election 2022 unguarded remarks and their toll on politicians