By Oscar Obonyo | 3mos ago

Members allied to Azimio La Umoja-One Kenya’s presidential nominee Raila Odinga are particularly uncomfortable with Muturi teaming up with the DP in Kenya Kwanza Alliance – four months to the General Election – arguing that the move raises questions on Muturi’s neutrality.

And the Speaker himself seems not to have helped the situation either by playing into the net of Wajir Woman Representative Fatuma Gedi, when on Tuesday he bent procedural rules to accommodate Fatuma’s tirade against the DP and even accorded her an opportunity to substantiate her land grabbing claims against the United Democratic Alliance (UDA) leader.

“The Speaker may have been trying to shield himself from accusations of a biased referee by demonstrating a shade of fair play. But when this backfired – judging from the way Fatuma relished the opportunity to dig in on Ruto’s character – Muturi had no option but to unmask his face and get his claws out,” observes Dr Henry Wabwire, a commentator on political affairs.

But dismissing them as not valid, Garissa Township MP Aden Duale describes the current goings on as “the work of bitter and jealous legislators” who want to hit at the Speaker for joining the rival Kenya Kwanza Alliance camp and not Azimio.

“Over the last two years, the Speaker has been laying ground and campaigning to vie for the presidency after assuming the leadership of the Democratic Party. All this while he was regarded as objective, but the moment he teamed up with the DP they suddenly became agitated and accused him of impartiality,” reacts the former majority leader in the National Assembly.

The Sunday Standard has established that the rising temperatures in the august House have everything to do with the influence and control of crucial Bills and activities, over the remaining period of the 11th Parliament. Among the dicey issues on the cards is the election amendment law, the Huduma Number Bill, the Finance Bill and discussion of the last Budget estimates under President Uhuru, delivered early this month.

Interest in the election law revolves around proposals to alter legislation allowing for manual transmission of poll results in cases where electronic devices fail in operation, while there are concerns that the Finance Bill could be used to impose further taxation on the people – which makes it an area of great interest for politicking.

The DP has separately vowed to marshal numbers in Parliament to oppose and vote against the Budget estimates. And while Ruto’s initial reaction was viewed as “the usual” chest-thumping antics, political pundits think the clouds are quickly gathering for a major and final storm in Parliament.

“Uhuru is leaving office in just under four months and we are aware he could try to push through certain legislations – like most exiting leaders do – that will favour him and his side of the coalition. We are ready to fight such manoeuvres for the greater interest of the people,” says Duale.

Noting that Speakers are crucial gatekeepers, Maore describes Muturi and Kenneth Lusaka (Senate) as very vital members of Ruto’s campaign team. According to the deputy majority whip, the two are bound to frustrate the parliamentary agenda of rivals in the Azimio side “for purposes of endearing themselves to the electorate”.

“These are very strategic positions and there is reason to be concerned. As a parliamentary official, this places me in a very delicate position of having to worry about our political rivals on the one hand and the Speaker on the other, each time we try to push through a position in the House,” confesses the Igembe North MP.

On Thursday, Muturi spiritedly defended himself before the House against accusations of impartiality. He explained his current role as a member of the Ruto-allied Kenya Kwanza Alliance, and stressed his constitutional right to belong to a political formation of his choice.

He maintained that he would not be partisan in the discharge of his duties, arguing that impartiality is not determined by which party one belongs to: “However, those of you who feel that the Speaker is not neutral, this is my word – the Speaker before you is unwilling to resign”.

Rarieda MP Otiende Amolo maintains that the Speaker should either resign or exclude himself from some specific sessions, because, “we take judicial notice that you have found it fit to take sides with the Deputy President.”

Standing his ground, however, Muturi argues that since independence all speakers, including himself, have been sponsored by political parties and he therefore sees nothing wrong associating with Dr Ruto.

Junet, however, argues that Muturi is “a totally different character unkown to us” after changing parties from Jubilee to a totally new outfit called United Democratic Alliance (UDA): “We are worried because we do not know you and your alliance.”

Maore equally discounts the Speaker’s defence pointing out that this is the first time in Kenya’s political history for a Speaker to run away from his sponsoring party or parties midway the life of Parliament to actively engage in elective politics, “while insisting on retaining his job”.

Against the backdrop of Thursday’s altercations in Parliament, though, is the emerging reality that Ruto’s troops have essentially taken control of the legislative arm of the government – at least going by the fact that the two heads, Muturi and Lusaka, are allied to the DP’s coalition.

With the two now in Ruto’s corner, as Lusaka tries to recapture his former governor’s seat in Bungoma County on a Ford-Kenya ticket, Duale attributes Azimio’s apparent restlessness to the fact that “they have technically lost the battle for the Legislature”.

“And going by the rate at which they have been losing cases in the court rooms, it may not be farfetched to suggest that the Judiciary is not with them either. In other words, Azimio is politically naked hence the bitter reactions,” claims Duale.

The MP, who is the pioneer majority leader in the National Assembly, further notes that the time remaining is too short for execution of impeachment processes – a factor that exacerbates Azimio’s alleged frustrations.

There is no denying that on Thursday Muturi exhibited what kind of mettle he is made of. He was firm and unmoved by the theatrics in the house. It is worth recalling that sometime in 1993, former Kikuyu MP Paul Muite tabled in Parliament a document on the infamous Goldenberg scandal and a couple of weeks later, it had disappeared without trace.

Ideally it is this experience that has persuaded MPs to insist on clearly itemizing and explaining their case bit by bit, before tabling documentation. And on Thursday Gedi seemed to be guided by the same wisdom only that her presentation was rather winding and full of narration, a matter that got the Speaker impatient and visibly agitated.

Unlike Muturi, observes Dr Wabwire, Lusaka seems to have managed to hold the Senate together without too many complaints for more than four years now. And his temperament and bag of tricks, argues the political analyst, has worked to that effect.

“But Muturi’s temperament and propensity for direct attacks makes him an easy target for Azimio. The Babu Owino (Embakasi East MP) defiance may well be the beginning of whittling down his authority in the august House,” says Dr Wabwire.

Maore traces the Ruto-Muturi relations to mid last year, when the Speaker sought blessings from the elders for purposes of being crowned as Mt Kenya spokesman.

“Then, I raised the red flag that the Speaker was a project of Ruto, who had been tasked to lay ground by taking over political leadership and handing over the Mt Kenya numbers. I feel vindicated,” says Maore.

The campaign tempo and temperatures notwithstanding, Parliament has in the meantime to find avenues of coping with the “political speakers”. Muturi, for instance, has categorically stated that he will not be resigning.

According to sub-section (1) of Article 106 of the Constitution, the office of Speaker is deemed vacant when a new House of Parliament first meets after an election, if the office holder vacates office under Article 103, if the House resolves by two-thirds majority or if the office holder resigns from office in a letter addressed to the relevant House. 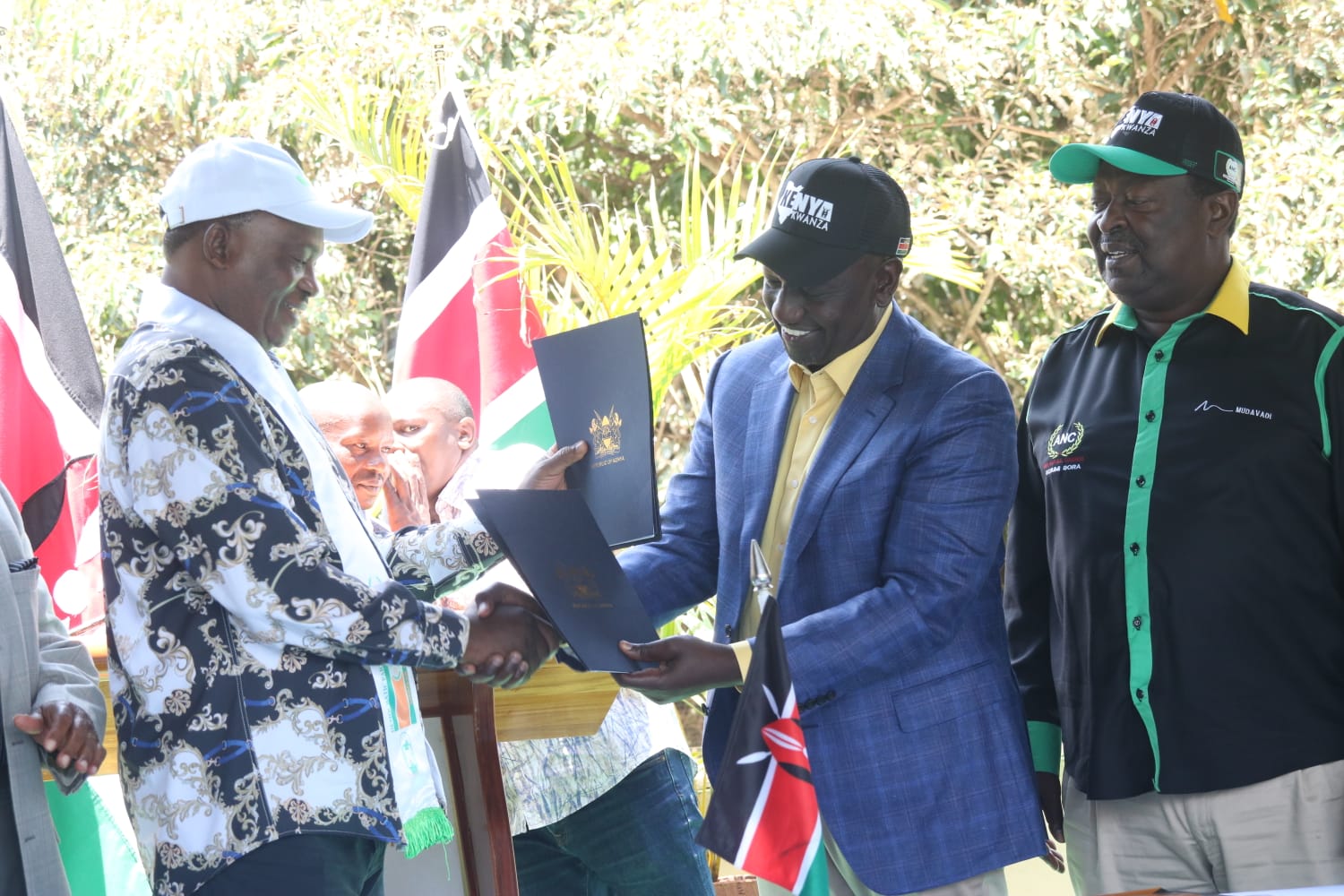 Speaker Muturi joins Kenya Kwanza Alliance
Muturi who is the party leader of the Democratic Party of Kenya (DP) signed the coalition agreement to effectively joined the alliance on Saturday.
Politics
By Dennis Tarus
4 months ago
.

By Grace Ng'ang'a 6 hrs ago
Premium William Ruto, Rigathi Gachagua enjoy privileges as they wait to be sworn in

By Oscar Obonyo 9 hrs ago
Premium Too close yet too far: Raila's fifth loss, a dream deferred again