DP Ruto will win in round one, Kenya Kwanza declares

Kenya Kwanza Alliance leaders have expressed confidence that DP William Ruto will win the August 9 polls in the first round.

Speaking during a rally in Trans Nzoia County, the leaders, led by Bungoma Senator Moses Wetang'ula and Tharaka Nithi's Kithure Kindiki, claimed the alliance commands 70 per cent of the vote.

They pledged that their government will initiate radical reforms to boost the economy and bring down the cost of living.

“The fifth government to be formed by Kenya Kwanza team will tighten the rope on unnecessary external borrowing. We shall retire from expensive external borrowing and, if necessary, borrow prudently,” said Wetang’ula.

According to Wetang’ula, the country's ballooning debt skyrocketed after the 2018 handshake between President Uhuru Kenyatta and ODM leader Raila Odinga.

“The former President Mwai Kibaki left the country with a debt of Sh1.8 trillion, under Uhuru and Ruto government, the debt went up to Sh4.6 trillion. After the handshake between Uhuru and Raila, it stands at Sh11 trillion,” said Wetang’ula.

The senator warned against the tampering of the polls and outlined that the alliance will relook the Competency-Based Curriculum (CBC) and invest Sh100 billion in support of small business enterprises (SMEs).

“Our agenda is to ensure money is in the pockets of Kenyans. We shall disburse millions of shillings help to help small businesses,” he added. “We will relook at the CBC because it is burdening parents.”

Kindiki, on his part, took issue with Odinga’s stand on the suffering of farmers amid the rising cost of living and accused the former premier of failing to mitigate the prevalence of food insecurity.

“The president must be careful on the way he is handling the transition process. He should stop intimidating those who are not allied to his preferred successor,” said Kositany. 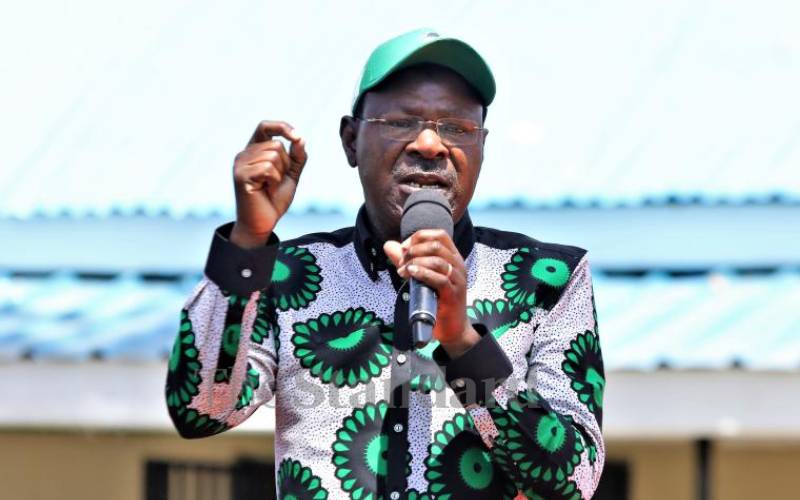 Ruto allies claim State will use agency to interfere with elections
Ford Kenya leader Mr Moses Wetang'ula warned state officers that they would be held liable if they participate in the meetings.
Politics
By Ndungu Gachane
3 months ago
.

Premium Kenya Kwanza manifesto: When the devil is not in the details
Andrew Kipkemboi
By Andrew Kipkemboi
24 minutes ago
Premium Why Maasais eat lots of red meat, but hardly suffer gout
Health & Science
By Ayoki Onyango
1 hour ago
Premium Inside Fai Amario's disputed estate
National
By Daniel Chege
1 hour ago
UEFA steps up fight against online racist abuse of players
Football
By Reuters
2 hours ago
.

By Allan Mungai 8 hours ago
Ruto's plan: Winner or ammunition for rivals?