Janet Ong'era: This is my pledge if you elect me Kisii governor 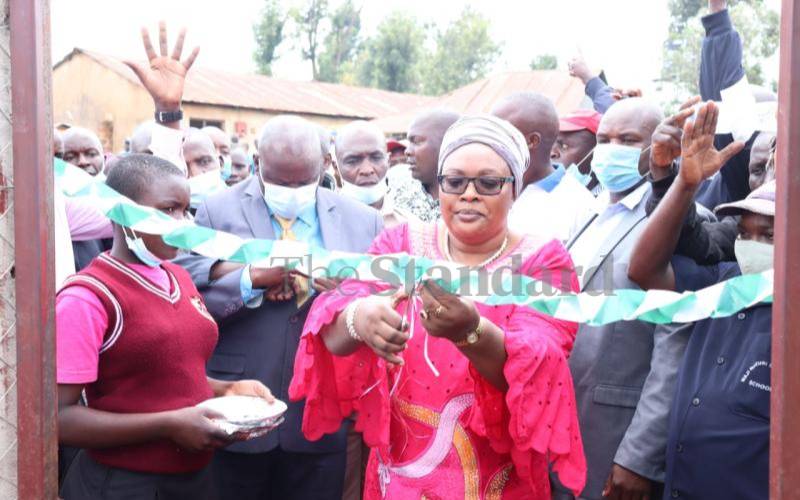 Kisii Woman Representative Janet Ong'era (pictured) has launched her governorship bid with a pledge to pick up from where governor James Ongwae will have left if she succeeds him in next year's elections.

Ong'era, who served as a nominated senator between 2013 and 2017, called on the electorate to vet all those seeking the county's top seat before electing anyone.

The MP, who spoke at Maji Mazuri Secondary in Nyamache sub-county where she commissioned a Sh10 million water project, said: "I am ready to continue with the development projects governor Ongwae has launched."

"Interior Cabinet Secretary Fred Matiang'i was to come to commission this project but he sent me to represent him. This is the kind of work we want to continue doing for the next five years,” Ong'era said.

She added: "I call for sobriety even as we choose those who will lead us ahead of the elections. I am calling on the electorates in Kisii should keenly examine the track records of each of the aspiring governors and pick the best."

"Time has come for us to check what our leaders have done over the last five years. Let us examine their development agenda and how they executed it and pick only those who have good track records. I pledge better leadership and economic prosperity of our county,” said Ong'era.

Ms Ong'era hopes to vie for the seat on ODM ticket and she will be battling it out for the Orange party's endorsement against area Senator Sam Ongeri and Dagoretti North MP Simba Arati, among others.

“Our community has come of age politically and there is a lot happening in terms of leadership. Fulfillment of our ambitions comes second to having a better society that has achieved its development record,” Ong'era said.

She becomes the second woman to declare her interest in the county’s top seat after Ms Rachel Otundo, who contested the Nyaribari Chache parliamentary seat in 2017 but lost to Richard Tongi.

Since the army takeover, internet services have been disrupted. The shutdown has also choked e-commerce.

By Betty Njeru | 25 minutes ago

By Joachim Bwana, Collins Kweyu and John Shilitsa | 2 hours ago

You betrayed our cause, Kalonzo tells ANC leader over alliance with Ruto