Wambora: Man with nine lives takes over as governors’ chair

By Saturday Standard Team | 1yr ago

Embu Governor Martin Wambora’s win as the chair of Council of Governors (CoG) adds a notch to his chequered political career.

For a man who has survived politically by the skin of his teeth, his election to the helm of the governors’ body heralds a happy ending to his tenure next year.

Yesterday, Wambora was unanimously elected to chair CoG, taking over from Kakamega’s Wycliffe Oparanya who has served in the position since January 2019.

Wambora has many records, one of them as the first governor to be impeached twice — but survived.

His victory for the second term was also confirmed by the Supreme Court after his arch-rival and former Embu Senator Lenny Kivuti unsuccessfully challenged his win.

Wambora will serve alongside CoG vice-chair James Ongwae (Kisii), who until his election served as the council committee chair for labour and human resources, as well as Elgeyo/Marakwet Governor Alex Tolgos who is the new Whip.

With this change of guard at CoG, President Uhuru Kenyatta and ODM’s Raila Odinga have cemented their firm hold on the governors following the election of pro-handshake team.

Wambora, Ongwae and Tolgos are ardent supporters of President Kenyatta and Raila and are among the proponents of the Building Bridges Initiative (BBI).

In his acceptance speech, Wambora said his win was a result of consultations with colleagues, partners in the Judiciary and development partners.

He stated five priority areas in his to-do list as he takes over from Oparanya.

Wambora committed to facilitating the implantation of the recently launched county Covid-19 social and economic reengineering strategy by all the 47 county governments.

He also promised to spearhead negotiations to ensure adequate resources to counties, enhance collaboration between the national and county governments and other stakeholders.

Other areas of attention he cited include the provision of adequate resources to the council, the intergovernmental agenda as well as the realisation of the Ugatuzi Tower project.

The CoG’s support for the BBI is crucial not only to rally county assemblies to pass the referendum Bill which seeks to increase the counties allocation to at least 35 per cent from the current 15 per cent, but also steer campaigns.

On Tuesday, the Independent Electoral and Boundaries Commission (IEBC) presented the BBI Bill to the 47 county assembly speakers after the proponents met the requisite one million signatures threshold.

Wambora’s election gives Kenyatta and Raila the grip on governors to steer the BBI conversation especially in the face of rebellion in Mt Kenya region.

After receiving the instruments of power, Wambora was categorical on the Kenyatta’s and Raila’s initiative.

“We should not turn a blind eye on the BBI process which is a culmination of views from the public on the desired constitutional amendments within the possibilities of a referendum later this year, most likely in June,” Wambora said.

He rallied his colleagues, the vice-chair and Whip, all chairpersons of committee, and the entire council to walk the journey with him. 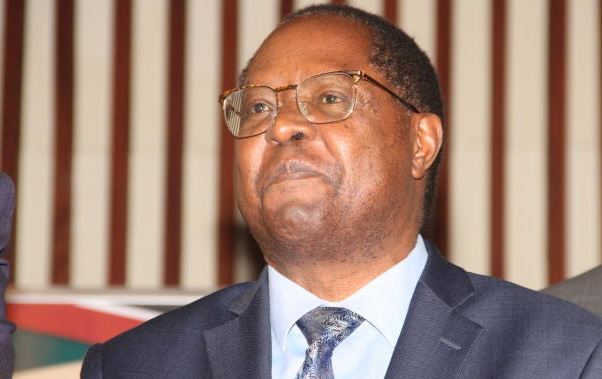 Wambora (pictured) floored Maj (rtd) Godana, whose candidacy was stacked against a number of odds — he is a first timer, a member of ODM and was faulted for skipping council meetings.

Oparanya is also an ODM member and therefore by default, disadvantaged Godana, whose Coast colleagues gave the exercise a wide berth.

At the start of the closed-door meeting held at a hotel in Nairobi and attended by around 30 governors, The Saturday Standard reliably learnt that they resolved that the seat be reserved for Eastern, specifically Ukambani or North Eastern region.

This means Ngilu would have carried the day after governors Kivutha Kibwana (Makueni) and Alfred Mutua (Machakos) opted out.

“Governor Ngilu didn’t show up,” stated a governor who didn’t want to be quoted.

“We agreed through consensus on the new leadership. I thank all governors for believing in me. I will work with the new chair to ensure we empower our youth, women and persons with disabilities,” Ongwae said.

President Kenyatta hosted 10 Mt Kenya governors at State House on Wednesday, where it is reported the elections were discussed.

The second term governors dominated the list of contestants for the top leadership ganging up against the first timers, which saw Ngilu stage a no-show despite declaring her interest in the position.

Most of the 12 council committee chair’s seats were unopposed.

Ongwae, who is credited with heading the Kenya Civil Service Reforms in the Office of the President in the 90s through the structural adjustment programme by the Word Bank and IMF, is expected to share the experience in building the council.

“The EU looks forward to engaging the new CoG leadership and offer our support to move the devolution agenda forward.

“We thank Oparanya and his team for the steady leadership and cooperation during their tenure,” said Modue.

By Washington Onyango 14 mins ago
Lessons for Shujaa, Lionesses after improved show in Dubai

By AP 31 mins ago
Russia rejects $60-a-barrel cap on its oil, warns of cutoffs