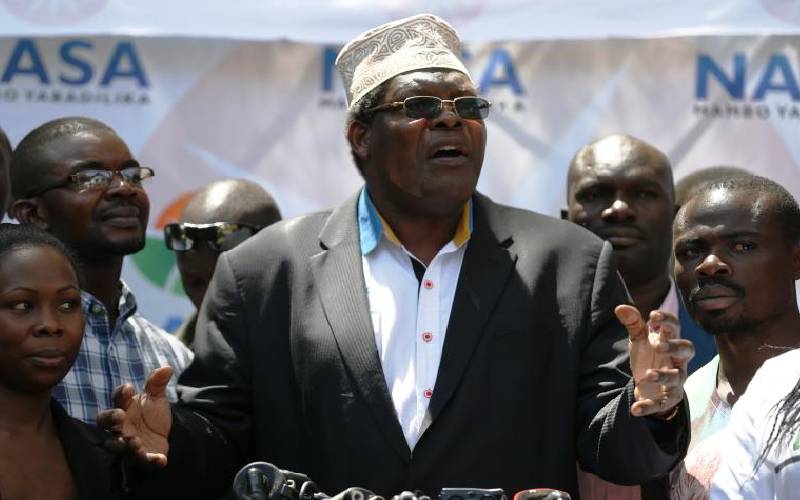 The city boss seat fell vacant following the impeachment of Governor Mike Sonko over gross violation of the Constitution, abuse of office, misconduct and crimes against national law.

In a press statement issued on Monday by party chairman Miruru Waweru, Miguna Miguna will fly its flag in the by-election slated for February next year.

Waweru described the imminent mini-poll as an opportunity for Nairobians to correct what he said was the greatest political mistake of our generation.

“Another opportunity for the greater people of Nairobi to reclaim their capital has manifested itself with the forthcoming by-election, it is a chance to correct one of the greatest political mistakes of our generation,” read the statement in part.

Waweru said only Miguna Miguna can correct bad leadership, ineptitude, unbridled lust and glutton for public resources which have been witnessed for the last eight years.

He described Miguna Miguna as a Kenyan citizen who has sacrificed and worked for the country and is capable of bringing sanity in the capital city.

The party also indicated that Miguna’s candidature goes in tandem with the virtues he stands for such as integrity, fight against graft, visionary and transformative leadership.

Waweru said the party and Miguna Miguna have resolved not to allow cartels to take control of the city and will fight tooth and nail to ensure they are banished.

“Thirdway Alliance Kenya and Dr Miguna Miguna share a common belief that Nairobi and indeed the Republic of Kenya can no longer be entrusted in the hands of a corrosive cartel of plunderers and criminal enterprise,” said the party.

Miguna said he had decided to run after getting legal advice from Waikwa Wanyoike, a constitutional lawyer and co-founder of Katiba Institute.

“Having received competent legal advice from @waikwawanyoike on December 19, 2020, I, Miguna Miguna, a Kenyan citizen by birth and registered voter in Nairobi, hereby declare my candidature for the position of Governor of Nairobi in the upcoming by-election. Volunteers are welcomed,” Miguna tweeted.

Miguna said he will direct his campaign team to pick nomination forms, fill them up and submit them to the poll body IEBC.

He vied for the same seat in the 2017 General Election as an independent candidate and came fourth with 10,308 votes behind Sonko, Evans Kidero and Peter Kenneth.

Nairobi County Assembly Speaker Benson Mutura was recently sworn in as acting governor after Governor Sonko’s was impeached on December 17.

Mutura will be in charge for 60 days ahead of a by-election by IEBC to replace Sonko who had no deputy by the time he was impeached.