Jubilee and Orange Democratic Movement were yesterday engaged in last-minute high-level consultations ahead of the unveiling of candidates for the Nairobi gubernatorial by-election.

Political parties seeking to participate in the by-election are expected to submit names of individuals contesting in the primaries to the Independent Electoral and Boundaries Commission (IEBC) by today.

A senior ODM official said yesterday that “top party officials are consulting” in what could culminate into a joint ticket between the Orange party and the ruling coalition for the February 18 mini-poll.

Both parties are set to announce the names of individuals interested in the race after they called for applications from their members.

Catherine Muma, the ODM elections board chair on Saturday said the party leadership would make a decision on whether or not to field a candidate based on the strength of those who will have shown interest.

“There are a lot of considerations to be made after the deadline. We have to vet the individuals to ensure they meet the requirement and they can deliver the seat.

"A party does not go to an election merely because people have applied to participate,” Mumo said in a statement that suggested the party could pull out of the race if they don’t get a popular candidate. 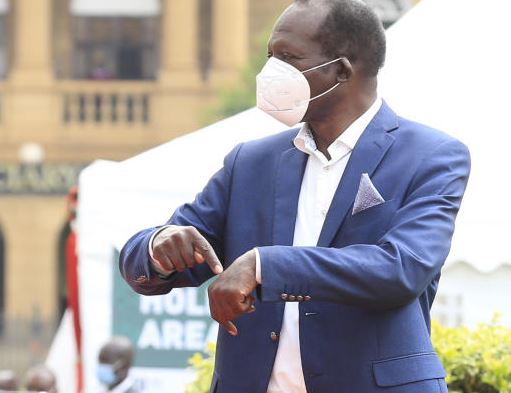 On the same day, Raphael Tuju (pictured above), the Jubilee secretary-general said the party would wait for the deadline before making public names of individuals seeking the party ticket.

“We have given people up to Monday and some have decided to take advantage of the extended time,” said Tuju. “As a party, we can only wait until the deadline before we communicate the list of applicants.”?

The name of Edwin Sifuna, ODM secretary general has also popped up in the arrangement between Jubilee and the Orange party in which one of the outfits would produce a governor candidate while the other gives a running mate.

Yesterday, Kagure said she was ready to square it out with other candidates.

“We are ready for the contest. The declaration by the IEBC that the seat is vacant gives us the opportunity to market ourselves and our policies to wananchi so that they can pick the best among us,” Kagure said.

Kagure, who rose from being a house-help to become a successful real estate, hospitality and pharmaceutical industry player, said the capital city requires experienced leadership to restore its lost glory.

“I have been in politics since 2015, though largely in the back office because my ideology is that a good shepherd leads from behind unless the flock is in danger. Nairobi people are both endangered and injured,” Kagure said.

She was among individuals whose names were floated to succeed Polycarp Igathe as Nairobi deputy governor, but Sonko, in a dramatic move, nominated Kenya-born Canadian lawyer, Miguna Miguna instead.

Wanjiru has since declared herself the “Hustler Nation” candidate and said she was ready to face her competitors.

Wanjiru unsuccessfully contested in Jubilee primaries in the run-up to 2017 polls. It was not immediately clear if she would battle for Jubilee ticket or go it alone as an independent candidate.

In a recent interview, she said: “I have been campaigning for the seat, all I need to do is to just accelerate it. I am the candidate who the people have been waiting for and I am ready to serve Nairobians.”

Wanjiru said that she stepped down for Sonko and Peter Kenneth last time and this was her time to serve the people of Nairobi.

Waweru is also counting on the support and popularity of Jubilee to ascend to the Nairobi top seat.

He recently lobbied ODM leader Raila Odinga to back him for the seat as the handshake candidate for delivering 5.2 million signatures in support of the proposed constitutional changes.

“In 2016, I was the most acceptable person for the governor’s seat by both the middle and lower classes of Nairobi, but I decided to sacrifice for the sake of the party,” Waweru said.

Kenneth has resorted to keeping a low profile despite his name popping up among those seeking to run.

Some facilities have ICU beds but lack the vital input and are forced to refer critical patients to other counties.