With less than 20 months to the end of President Uhuru Kenyatta’s final term, a battle for the soul of his Mount Kenya stronghold has begun in earnest.

And ODM leader Raila Odinga is upping his ante for the vote-rich region.

In the 2013 elections and twice in 2017, the region voted for President Kenyatta to the last man after they did so for his predecessor Mwai Kibaki in 2002 and 2007 elections.

Today, there is palpable anxiety in a region that has produced three heads of state since independence, but is politically at a crossroads and caught without an heir apparent after the exit of Uhuru in August 2022.

The region has now become a rich hunting ground for politicians with presidential ambitions.

Unlike in the past where a strong heir would hang around bidding their time, the region now has to endear political suitors outside Gema communities.

Deputy President William Ruto enjoys a big following among residents in Mt Kenya after working closely with Uhuru in the last two terms.

Ruto has hosted groups of Mt Kenya leaders and held several meet-the-people tours in the region with over five million votes.

But there is a political fallout between the two Jubilee supremos and this has opened the region for entry by other players.

Through the Handshake with Uhuru in March 2018, Raila now enjoys a good working relationship with the president and this has helped warm up the region for him.

On Friday, Raila upped his stakes when he was hosted in a high powered close-door meeting with Mt Kenya region top leadership at the home of nominated MP Maina Kamanda in Ol Kalou, Nyandarua County.

Billed as a Building Bridges Initiative (BBI) strategy meeting, the big question of 2022 succession took over the room’s discussion attended by nearly all of the region’s governors.

In acknowledging the complexity of the situation in Mt Kenya, Meru Governor Kiraitu Murungi reportedly told those in attendance that the region has been in power for 35 years, and it was time they negotiated with others.

“The late President Jomo Kenyatta had 15 years, Kibaki 10 years and when Uhuru Kenyatta finishes his 10, it will be 35 years. From the signs the Presidency will go to another community. I urge the political leadership of Central Kenya to move closer to the political negotiating table so that they also get a better post in the next government,” Kiraitu was quoted as saying. 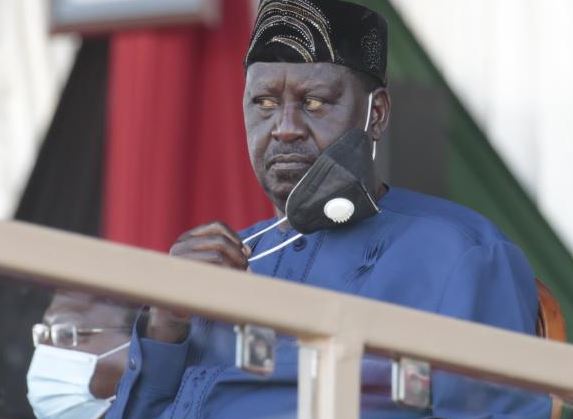 Raila (pictured), according to a source at the meeting, told the forum that his focus was on the passage of the BBI report and nothing to do with the 2022 presidential succession politics.

“My association with the president has nothing to do with who will succeed him. We never talked about who will take over from him. 2022 is an event. It will come and go but Kenya will remain,” Raila was quoted as saying.

The ODM leader, who has become the face of BBI, said the changes were a step in the right direction and that Mt Kenya region should not be left behind.

“We want a Kenya where there is no hatred among tribes. Unity in diversity is the richness of our country. And it is possible to realise that unity.”

But the rest of the discussion was dominated by succession politics, kicked up by Kiraitu who said it was high time Kenyans rewarded the ODM leader because he had fought for long for the betterment of the country.

“I personally have fought Raila and opposed him because of my support for former President Mwai Kibaki and Uhuru Kenyatta when they were seeking the presidency. But now because Kibaki has retired and Kenyatta is finishing his term, if Kenyans decide to rally behind him who am I to be on a different side?” said Kiraitu.

His sentiments were echoed by Kimunya who said the BBI is owned by Uhuru and Raila, and whereas one is retiring, the other will be left to implement it.

He said the Constitution (Amendment) Bill, 2020 was good for the country and the two leaders should be given all the support to have it passed and be implemented to the letter by Raila.

In 2013, when they were campaigning for presidency, Uhuru publicly promised that he would support Ruto for the top seat after he finishes his 10 years in office, a matter that he repeated across the region in 2017 during the quest for the second term.

Perhaps it is the promise that has helped give Ruto an upper hand in the push for the support of the region.

Yesterday, Kimunya said the Ol Kalou meeting had the blessings of the president.

“During the Naivasha retreat the president and Raila had been briefed of the plan for this meeting, which was to take place sometime before mid-next year but pushed forward with their full knowledge and blessings,” Kimunya said.

He said a similar meeting is scheduled to take place in Nyeri County early next year. As the leaders shift their support to Raila, they are also keen to extinguish the debate on the promise that Uhuru made to Ruto.

Governor Waiguru is said to have taken a swipe at the DP on this.

“There are other political debts to be paid. If we are talking about paying back for political support, he (Ruto) should realise we had another debt, which we shall pay first before getting to his,” said Waiguru.

And Kamanda further dismissed the narrative of 10 years for President Kenyatta and another 10 for Ruto as far-fetched.

“They always repeat the story of a wedding with vows of 10 years for me and 10 years for you. Were they the actual wedding couple? They were not,” said Kamanda.

“If a partner becomes a danger to either spouse that marriage can be called off. When you see Uhuru saying he doesn’t like the direction taken by a certain political faction, he means it.”