By Roselyne Obala and Moses Nyamori | 1yr ago 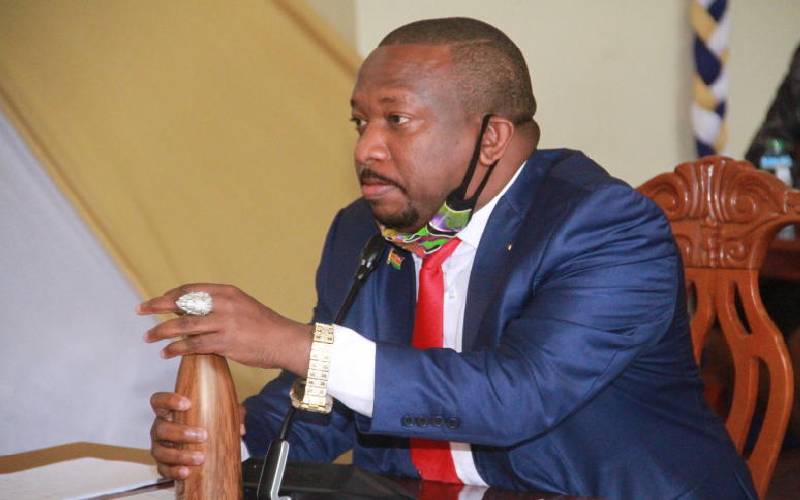 The Senate will today begin the process to determine the fate of embattled Nairobi Governor Mike Sonko who was impeached by MCAs last week.

Mr Sonko (pictured) will have to wait up to 10 days to know his fate concerning the charges brought against him by Members of the County Assembly through an impeachment motion sponsored by Minority Leader Michael Ogada.

The MCAs accused Sonko of gross violation of the Constitution or any other law (the County Governments Act, 2012, the Public Procurement and Disposal Act, 2015 and the Public Finance Management Act, 2012), abuse of office and crimes under the national law.

They also faulted Sonko for failing to approve the Sh37.4 billion budget to facilitate operations undertaken by the Nairobi Metropolitan Services (NMS).

The Senate House Business Committee is rooting for a select committee as provide for in Section 33 of the County Government Act. In the past, the House has overruled select committee like in the case of former Nyeri Governor Nderitu Gachagua (now deceased) and former Kiambu Governor Ferdinand Waititu.

“A special sitting is set for December 9 at 2:30pm. The business to be transacted at the sitting shall be the hearing of charges against Mike Sonko,” Senate Speaker Kenneth Lusaka said in a Kenya Gazette notice.

A source told The Standard that Sonko’s survival chance could be further complicated by the fact that he is not in good books with the senators who have faulted him for continuously “belittling” them whenever he appears before them.

“The governor’s unbecoming character could be his greatest downfall. His arrogance and conduct when attending Senate committees might cost him,” said a senator who didn’t want to be named.

It is also understood that the camps in the Senate pitting President Uhuru Kenyatta and ODM leader Raila Odinga on one hand, and the Tangatanga wing allied to the Deputy President William Ruto on the other hand, are trying to close ranks so that they have Sonko replaced.

Sources indicated that powerful political figures were pushing to have Sonko’s nominee for deputy governor Anne Kananu Mwenda take over as stipulated in Article 182 of the constitution.

Ms Mwenda’s nomination to replace Polycarp Igathe, who resigned in 2018 after falling out with Sonko, stalled in the Assembly following a court case questioning the legitimacy of the process since the governor has been barred from accessing the office in the ongoing graft-related charges.

Nairobi Senator Johnson Sakaja said the House would prosecute the matter devoid of any political interests.

Mr Sakaja said senators’ decision would be informed by the evidence adduced by both the Assembly and the governor.

Nominated senator Sylvia Kasanga said today’s session would be to determine whether or not to consider the case through plenary or committee.