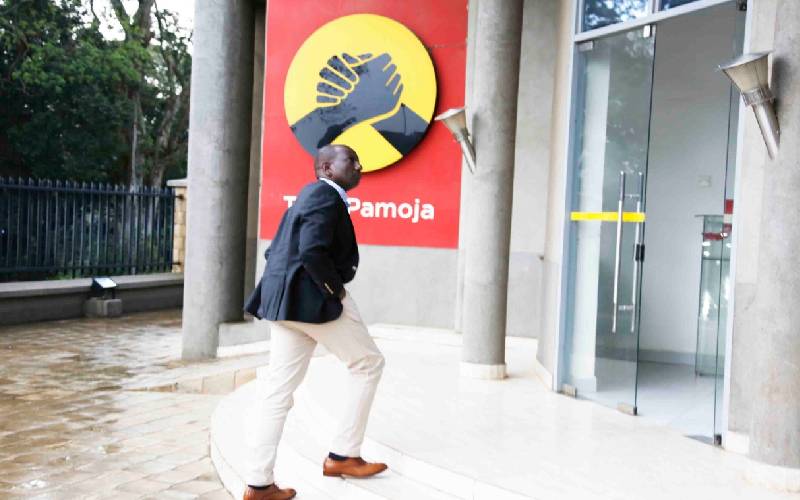 Deputy President William Ruto on Tuesday visited at the Jubilee Party headquarters in Nairobi’s Pangani area for the first time since April when his allies were de-whipped by the party.

During the unplanned visit, the DP who was accompanied by Langata MP Nixon Korir declined to divulge much, maintaining that the visit was a Jubilee party affair.

The DP took to his Twitter handle to assure Kenyans that the ruling party was ready to serve Kenyans having been formed on a people-driven ideology.

Ruto hailed Jubilee party as a party founded principles of inclusion cohesion and transformation of the country.

“Jubilee is a national party that is founded on the principles of inclusion, cohesion and transformation of our country. Our politics is driven by ideas that are people-centred,” said the DP on Twitter.

Ruto and his allies have kept off the party headquarters since April when MPs allied to the DP lost their slots in key House positions both in the Senate and the National Assembly in what was seen as the end of the marriage between the DP and President Uhuru Kenyatta.

Ruto and his allies reportedly launched a new party secretariat dubbed Jubilee Asili Centre in Kilimani to host his allies who have been de-whipped by Jubilee party.

Former Majority leader in the Senate Kipchumba Murkomen defended the move, saying they were forced to open new party offices after being denied access to the Jubilee headquarters in Pangani.

“We had a meeting with the DP at the Jubilee Asili Centre. It is a centre for all members, not parallel. It is the centre for Jubilee Party members who believe in the original idea of the party,” he said.

Ruto remained tightlipped on any meeting having taken place between him and Tuju with our calls and texts to Korir who accompanied him to Pangani going unanswered.

By Jacob Ng’etich and Allan Mungai | 20 hours ago

The four options for Kalonzo in 2022 succession