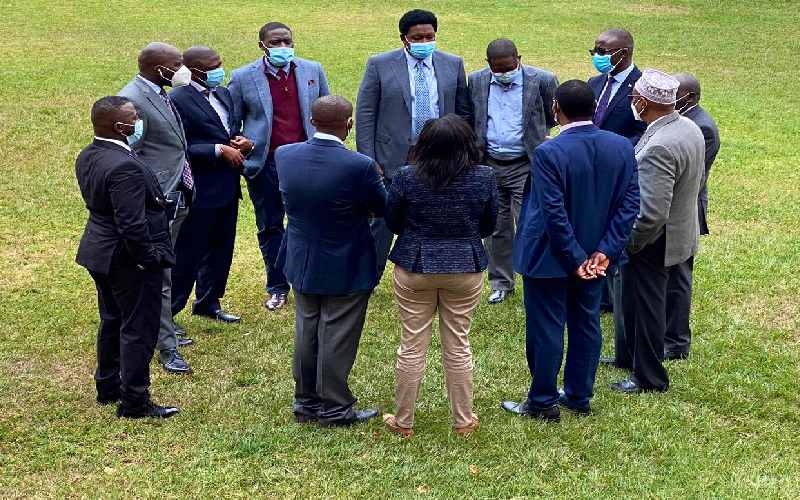 The Senate is set to deliberate on a proposed change to the law to allow counties to receive 50 per cent of the Sh361.5 billion today as the impasse on the revenue sharing formula rages.

This was after the 12-member mediation committee failed to strike a deal to unlock the deadlock that now threatens to paralyse counties’ operations.

Instead, the committee co-chaired by senators Johnston Sakaja and Moses Wetang’ula settled on two options, which the House leadership says will escalating the problem.

Speaker Ken Lusaka, Majority Leader Samuel Poghisio and his Minority counterpart James Orengo yesterday met and resolved to prioritise the passage of the financial law to cushion counties from the imminent shutdown through the Public Finance and Management (Amendment) (PFM) Bill.

“Tomorrow (today) we are going to have the normal sitting and deliberate on the proposed amendment to the PFM Act, which will allow the National Treasury to release 50 per cent of the money to counties,” Lusaka told The Standard.

“Immediately, the leadership will retreat with the mediation committee to deliberate on the options on the table and seek an amicable way out.”

Speaker Lusaka said he was engaging Poghisio and Orengo on the way forward to avert another acrimonious outcome.

“We expected the committee to come up with one position. We are meeting to deliberate on the way out,” said Lusaka.

Poghisio poked holes on the two options by the committee, saying it will only escalate the standoff after eight attempts to reach a deal flopped, resulting in the formation of the mediation team.

“Counties are crying and the bottom account is that we must find a solution. Our priority now is how to ensure operations in the counties are not stalled with this stalemate. We are going to move amendments to the PFM Act to allow them get the cash from the exchequer,” said Poghisio.

Today, he is set to introduce the Public Finance and Management (Amendment) Bill, National Assembly Bill, no 51 of 2017, which is in the Order Paper.

Poghisio also took issue with the Motion on today’s Order Paper that the Senate adopts the Finance committee report on the contentious Third Basis for Revenue Allocation.