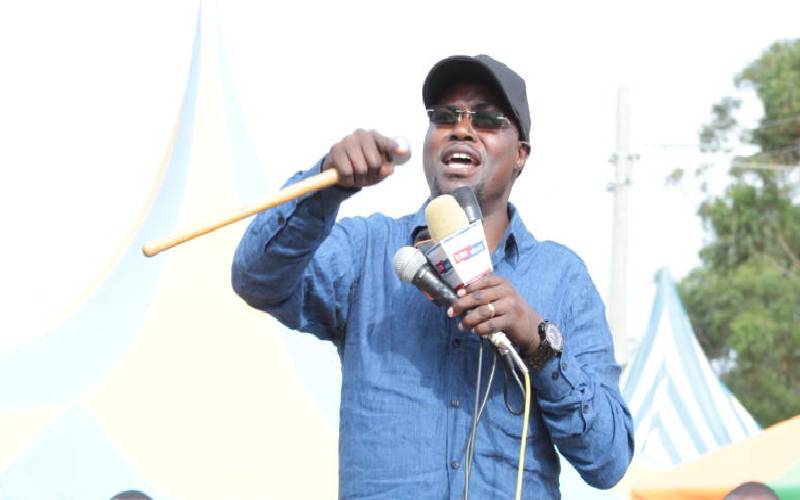 Protests have erupted in Emurua Dikirr this evening over the arrest of local MP Johanna Ng’eno.

The vocal MP who said to be on his way to the police station was picked up for questioning over scathing remarks against President Uhuru Kenyatta on his relationship with his deputy William Ruto.

Ng’eno, while addressing a gathering in his constituency on Sunday, asked President Kenyatta to dissolve government if he couldn't work harmoniously with his deputy.

The MP was reportedly arrested at Mogondo in his constituency where he had gone to inspect a local technical institute.

“The MP was inspecting a technical Institute at Mogondo ward when a contingent of security personnel arrived and pick him up,” a source told Standard Digital.

The arrest sparked protests that were ongoing by 6pm after the legislator allegedly refused to board the police vehicle.  A supporter streamed the protests live on Facebook

"Right now people are demonstrating while accompanying the MP who is walking while being escorted by about 60 police officers. The situation is tense," a voice was heard saying.

About an hour ago, the MP had updates in his social media platform Facebook that he had been arrested without explaining more information.

On Sunday said he had been summoned to Kisumu DCI offices on Tuesday over his remarks.

Narok CCIO Ethaipa Mwenda had earlier said that they were looking for him.

Previous article
FKF or KPL? Who has the mandate to declare Kenyan champions?
Next article
Tuskys relaunches Kilifi, Malindi branches in fight for survival

Trump summoned supporters to "wild" protest, and told them to fight. They did.