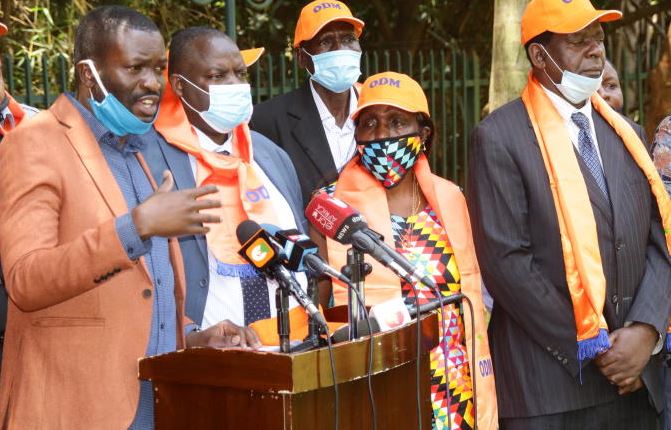 A crucial Orange Democratic Movement organ wants President Uhuru Kenyatta and the party leader Raila Odinga to expedite the Building Bridges Initiative (BBI) process so that a referendum can be held in good time.

The county chairpersons’ committee (pictured), which brings together the party’s chairpersons from all the 47 counties, yesterday expressed full support for the BBI process.

During a meeting in Nairobi, they said some reforms, like the reformation of the Independent Electoral and Boundaries Commission (IEBC), should be done in good time.

“As a party, we have already recommended the reforming of IEBC. This should be done urgently to pave the way for a referendum that would culminate in amendment of the Constitution,” party Secretary General Edwin Sifuna said.

ODM Nairobi branch chairman George Aladwa, said the committee’s support for BBI is not just limited to the proposed constitutional amendments but also the policy, administrative and legislative changes proposed by the process.

Mr Aladwa, who is the leader of the county chairpersons’ committee, read a statement on behalf of the chairpersons. He said they were also supporting Uhuru and Raila in their quest to review the strengths and weaknesses of Kenya’s governance and political systems based on the 2010 Constitution.

“We reject the lies and propaganda that BBI governance and political reforms will expand the Executive. The recommendation for 50 per cent of the Cabinet to come from Parliament actually reduces the burden of the Executive on the taxpayer and increases accountability through Parliament,” Aladwa said.

“We support the proposal to decongest the presidency by creating the office of the prime minister and deputies, whose occupants we know will be drawn from the National Assembly, thus not placing additional burden on the taxpayer,” Aladwa said.

They also backed changes meant to strengthen devolution by increasing the mandatory percentage of national revenue to counties and the decision to make the wards the primary centres of development in the country.

They also supported the party’s stand on zero tolerance on corruption and the need for evidence-based prosecution of corruption suspects.

Report should not be left to politicians alone, says CoG

Report should not be left to politicians alone, says CoG