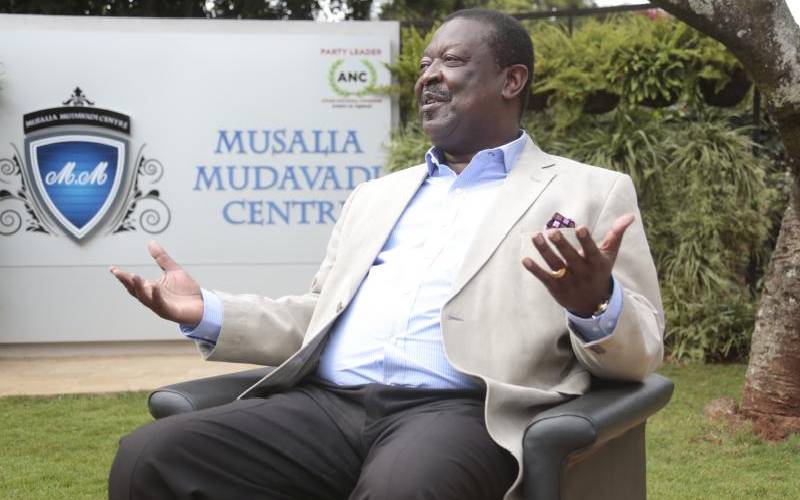 Amani National Congress (ANC) party leader Musalia Mudavadi (pictured) has his sights firmly set on wooing the Mt Kenya region in a strategy his allies say is key to clinching the presidency.

Mudavadi has been meeting groups comprising current and former leaders from the vote-rich region to bolster his 2022 presidential bid.

In the last two months, the Musalia Mudavadi Centre has hosted at least six meetings with leaders from Kiambu, Nyeri, Murang’a and Meru.

Insiders say Mudavadi has also been involved in talks to address concerns raised by central Kenya residents on delays by Agriculture ministry to supply subsidised fertiliser to tea and coffee farmers.

“We don’t see an alternative leader who will fix the economy in the post-Uhuru Kenyatta period,” said Mr Kamande.

Narc-Kenya leader Martha Karua had also paid a courtesy call to Mudavadi before they convened an impromptu meeting on May 29, which was attended by former Gatanga MP Peter Kenneth.

Meru Deputy Speaker Elias Murega, who led a delegation to the Musalia Mudavadi Centre on June 19, said he and other liberal-minded colleagues were listening to what the various possible Uhuru successors have to offer.

“Mudavadi is sober and always had a good ideology but he will have to up his negotiation skills in forging the post-Uhuru dispensation given his background of having been shortchanged by partners in the past,” said Mr Murega.

Weeks earlier, Mudavadi had been on the Kimeru-language Weru TV where he made an impassioned plea to listeners to support him in his quest to take over from Uhuru.

He told the Meru community that he was looking to form alliances with leading politicians from the region as he takes a second stab at the race for State House.

Mudavadi ruled out teaming up with, or being the running mate of Deputy President William Ruto, saying as far as he was concerned they were in competition.

“The Constitution bars William Ruto from running as deputy president for more than 10 years, so he only has an option of vying for the top seat or bailing out for somebody else. I will not be running with him because I am committed for the top job.”

When pressed about who would fit the bill as his running mate, the former vice president, who ran on a ticket with Ndaragwa MP Jeremiah Kioni in 2013 and emerged third after Uhuru and Raila Odinga, said it was too early to reveal such details.

Mudavadi said he was focusing on fixing the economy. He criticised the Jubilee government for making lofty promises and seeking to finance the same through expensive public debt, warning that debilitating repayments would be a huge burden on the next government.

“To put into perspective, in the budget read by Finance Cabinet Secretary Ukur Yattani in June, Kenya Revenue Authority has a revenue projection of Sh1.6 trillion in the 2020/21 financial year. Public debt repayment, which is the first charge, will gulp a whopping Sh906 billion,” said the Moi-era Finance minister.

Mudavadi also appeared keen to reassure listeners that he harboured no political ill will against Mt Kenya residents, touting his credentials that he was viewed as a safe pair of hands.

During a meeting with Nyeri leaders last month, he said, “Maybe others are bearing grudges and they will revenge once they get power.”

Analysts said Mudavadi viewed the political fallout between the President and his deputy as an ideal opportunity to expand his support in the region where he could bank on his cordial relationship with Uhuru since their Kanu days.

Prof Kobia Ataya and Gitile Naituli, however, said Ruto remained the front runner in the region.

“Anyone writing off Ruto will be in for a rude shock simply because he was the brains that engineered 2013 and 2017 politics,” said Prof Ataya.

Prof Naituli urged Mudavadi to “aggressively build a national stature if he wished to get real prospects of succeeding Uhuru.”

“The problem with Mudavadi is that he is slow to see an empty political space and occupy it. That is what has happened with the opposition after Raila Odinga’s handshake with Uhuru. One can’t say Mudavadi has forcefully taken that space.”

By Oscar Obonyo 11 mins ago
Premium Too close yet too far: Raila's fifth loss, a dream deferred again

By Patrick Vidija 10 hrs ago
President-elect: I called Raila Odinga this morning

By Stephanie Wangari 11 hrs ago
Ruto's acceptance speech: There's no room for vengeance