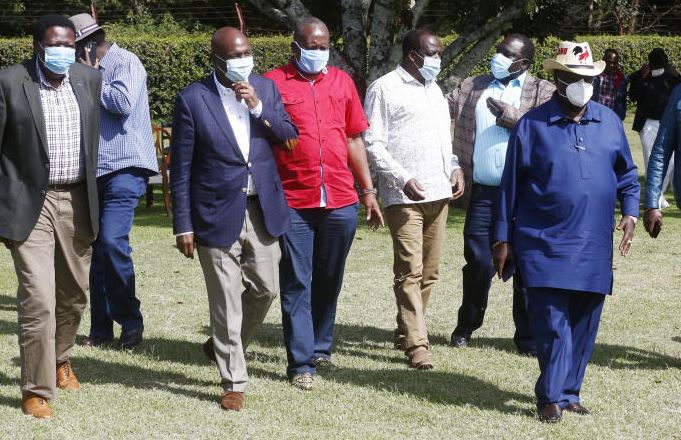 Luhya leaders (above) have assured Baringo Senator Gideon Moi of their political support.

The leaders yesterday met the Kanu chairman at his Kabarak home and said former President Daniel Moi did a lot for the people of Western region.

Leaders urge Gideon to work with Uhuru as 2022 beckons

Oparanya said they were happy to meet Gideon, saying his late father is the man behind all the industries in Western. He said they will be together with the senator in 2022 elections.

“As a region we have talked and the best way to take care of our people who live in deplorable condition is to move together with politics of purpose. We must make sure in the 2022 elections, we are together. We join you as like-minded leaders who mean well for this country,” Oparanya said.

Wamalwa said as Luhya leaders they have started consulting to have Ford-Kenya and Kanu work together.

The CS said together with Oparanya and Wangwe they support the handshake, the Building Bridges Initiative and uniting the country.

Wamalwa described Gideon as a rare calibre of a leader. He said the Luhya community will never forget the support Gideon accorded Amani National Congress (ANC) leader Musalia Mudavadi in his 2013 presidential bid.

The CS said they are happy with Kanu’s coalition deal with Jubilee, Wiper and Chama cha Mashinani. He said they hoped Ford-Kenya and ANC would join soon. He said the main agenda of meeting Gideon was to seek political solidarity.

Wangwe said the Luhya community will not be outside the government in 2022 and that is why they were happy to meet Gideon. “We have a history with Senator Gideon Moi since 2013 when he supported Mudavadi. Today’s meeting illustrates a discussion of leaders with similar thinking for Kenya, a united and prosperous nation,” said Wangwe.  Atwoli said continued collaboration has strengthened the relationship between the Rift Valley and Western region.

“It is through exchanging of views that a country is built. Our meeting has strengthened our political relationship with Rift Valley leaders for a united country,” he said.

Atwoli said such collaboration will ensure BBI and Handshake goals are realised. “With political goodwill and unity this country has great potential. Through these political engagements we are forging towards a sustainable economy,” he said.

Kanduyi MP Wafula Wamunyinyi said they will work with Gideon. He said they are committed and will formalise their relationship with Jubilee and Kanu.

By Patrick Beja and Nehemiah Okwembah | 42 minutes ago

By Moses Nyamori | 42 minutes ago