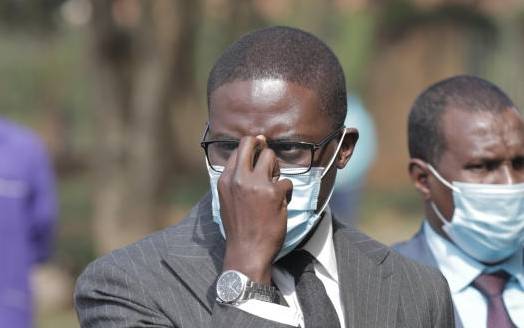 A section of senators hatched a plot to shoot down the Senate Majority Whip Irungu Kangata’s proposed amendment to the report on the third basis revenue sharing formula.

Nairobi Senator Johnson Sakaja (pictured) and his Makueni counterpart Mutula Kilonzo Jr had rallied some 23 senators from the losing and gaining counties to shoot down the proposal.

Sakaja and Mutula’s axis, which called itself ‘Team Kenya’, had earlier on Tuesday morning met at Panafric Hotel in a calculated move to defeat Kangata’s amendment.

Senators Mutula, Sakaja and Ledama Ole Kina (Narok) have all lined up amendments to the Senator Charles Kibiru-led Finance committee report, which should unlock the stalemate about revenue sharing among the 47 counties.

Sakaja to battle NMS in senate over estate parking fees

The Standard has also learnt that the filed notices of their amendments that in the event that one fails, they would move to the other until all the three are exhausted.

Already, the Senate has started dispensing with Sakaja’s proposed amendment and will be concluded when Senate resumes sittings next week.

Mutula argued that his amendments and Sakaja's are the same.

“We filed three notices out of abundance of caution. We will persuade the same senators to support this proposal, which we have christened 'Kofi Annan Formula,'" said Mutula.

“We need to convince our colleagues that no county should lose funds. We expect that next Tuesday, we have bipartisan and non-partisan contest...," said Sakaja.

Sakaja has already moved an amendment that the equitable share not exceeding Sh316.5 billion with allocation per county for financial year 2019/20 formula should apply.

Some senators from counties that would have gained if the Finance committee report was passed without amendments opted to stand with their colleagues from losing counties.

"We can have an uncontested referendum if we listen to everybody," Sakaja speaks on the BBI Report

Senate ad hoc committee retreats to write its report on the investigation into the medical equipment leasing deal.

By Jackline Inyanji | 7 hours ago

By Erastus Mulwa | 10 hours ago