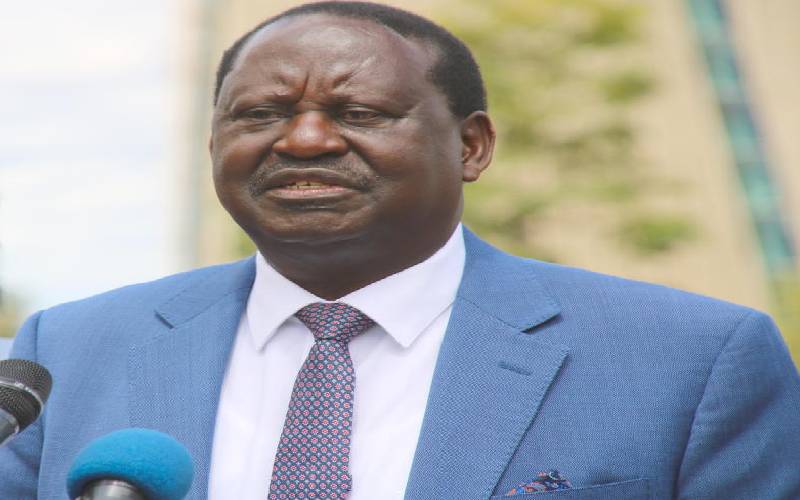 ODM leader Raila Odinga’s wife, Ida, yesterday, expressed the joy of watching him stroll in the garden at their home in Karen, Nairobi, a day after he returned to the country from Dubai, where he underwent a minor hip surgery.

“He is okay and doing well. I can see him walking outside in the garden. We thank everyone for their prayers. The family will issue a statement at the right time,” Ida told The Standard yesterday.

His handlers said the ODM leader did not want his arrival to attract attention, hence the low-key return at about 9.30pm.

He was picked up from the presidential pavilion and driven to his residence. “The PM did not want his return to cause drama, hence the timing and low-key events at the airport. He is fine and resting at home,” said an insider.

A flight tracking system of the private jet that has a capacity of 19 passengers showed it left the Al Maktoum International Airport in Dubai at 5pm and landed at JKIA at about 9.30pm.

Even though the plane was scheduled to depart for Lusaka, Zambia, it did not leave Nairobi immediately.

It was enroute to Dubai from Zambia when it made a stop at JKIA and picked the two together with Mombasa County Assembly Speaker Ibrahim Khatri last week. It costs at least Sh10 million to hire such a jet. It is not clear who catered for the bill.

The three, together with Raila’s handlers, flew back in the same jet on Sunday, officials said. The operators of the jet are based in United Arab Emirates and operate a modern, state of the art medium and long-range fleet air crafts.

Ida said the decision to airlift the ODM leader to Dubai for treatment was meant to allow him adequate time to recover without interruption from family and guests.

“Had he been here, many people would have flocked the home to see him. Each visitor always wants at least to talk to him, thus eating away into his recovery time,” she stated.

She said Raila was admitted to the Dubai based International Hospital run by Germans and successfully underwent surgery to treat a mild nerve disorder on one leg.

The doctors at the hospital had recommended some time for him to recover.

“You know that currently there are no commercial flights. This meant if he was to come back, we had to charter a plane,” she stated.

Ida said before Raila returned, she had stayed in contact with him on hourly basis before and after the minor operation.

On July 1, Raila spoke after the operation. “I’m feeling great and let me thank everyone who sent me messages of goodwill. Asante, Asante, Asante Sana,” he said in a tweet.

The handing over of the Building Bridges Initiative report has delayed, ostensibly as a result of Raila’s absence from public limelight.

Ugali alternatives as unga subsidy ends
National
By Brian Okoth
35 mins ago
Football players' cars set on fire after loss in Argentina
Football
By Associated Press
1 hr ago
IEBC limits access to Bomas of Kenya
National
By Stephanie Wangari
1 hr ago
Conceding after losing is graceful and classy
BLOGS
By Cosmas Butunyi
1 hr ago
.