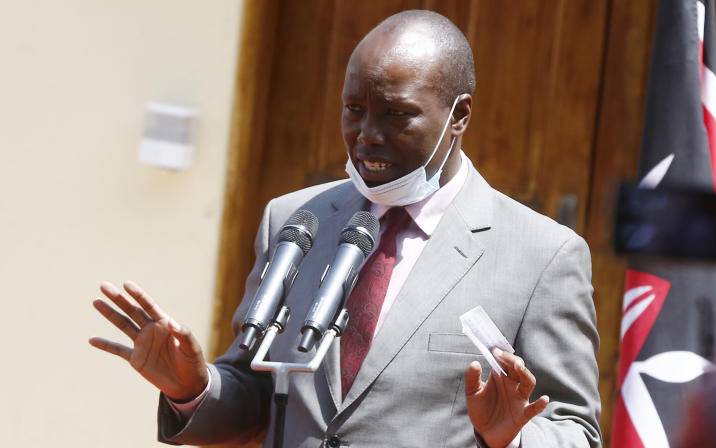 Nakuru Governor Lee Kinyanjui (pictured above) has said he will not yield to intimidation by a section of Members of County Assembly (MCAs) who have vowed to impeach him.

A furious looking Kinyanjui addressed the press at the county headquarters where he dared the MCAs to impeach him if they had sufficient grounds.

“The MCAs ought to stop these threats that unless we make certain changes they will impeach me. Let them bring it on. They shouldn’t even wait for the 14 days’ ultimatum they gave. They can do it now,” said Kinyanjui.

A section of the MCAs at the 72-member house on Tuesday last week accused the governor of going against the constitution by centralising procurement processes and appointing a Deputy Director, a position that does not exist in law.

“If Kinyanjui does not comply with the joint Budget and Finance committee report within the said period I will be ready to table an impeachment motion for which we shall have valid and sufficient grounds,” said Stanley Karanja of Naivasha East Ward.

Kinyanjui however dismissed the MCAs telling them to focus on their constitutional roles and let him deliver as per his mandate.

“Procurement functions are not in any way linked to the Assembly. This is a function of the executive and they should not meddle with what does not concern them,” said the agitated governor.

He accused some of the MCAs of using threats to have the procurement function decentralised for their selfish reasons.

“These are the people who have been piling pressure on the past directors while seeking to benefit themselves. I have had four acting procurement directors whom because of them had to leave the job,” he said.

The governor said that the Assembly has continued to interfere with the functions of the Assembly in a manner that would see him breach the law. Kinyanjui, however, declined to state the proposals they had tabled before him.

“They have been trying to arm-twist me to do things that do not exist in law. That won’t happen. Am not in the office of the governor courtesy of them but courtesy of the electorates. I will not set up systems that fit their personal interests,” said Kinyanjui.

He wore a brave face saying that none of his appointments warrants an impeachment process as per the constitution.

“I know my rights and the people of Nakuru County know their rights. There is nothing that I have done in contravention of the constitution. In all that I have done nothing has put public interest in jeopardy,” said the governor.

He added that he was yet to receive a report by the said committee which indicated that the county had not spent Sh9 billion out of the Sh10.4 billion allocated to development vote during the 2019/2020 fiscal year.

The report sparked emotions during the Tuesday plenary sitting as the MCAs accused the governor’s administration of failing to absorb development funds placing them into a political grave.

There will be a re-trial of former rugby players Frank Wanyama and Alex Olaba, who were last year found guilty of gang rape