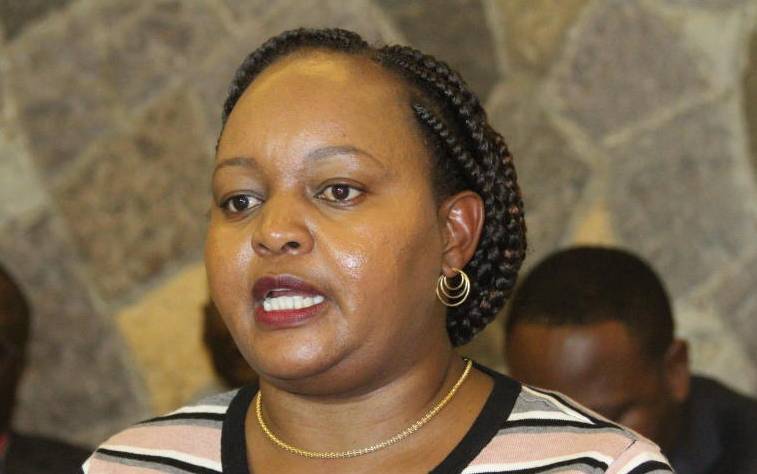 The committee has structured the hearing to accord both the governor (pictured above)  and her accusers a day each to argue out their cases.

The process will proceed tomorrow (Wednesday) when the governor and her defence team will be accorded time for the rebuttal to launch defence against the allegations.

On Saturday, Waiguru tabled  40 cartons of evidentiary documents to the Office of the Clerk of the Senate for her defence in conformity with the deadline set by the Senate committee.

While speaking to the media on Saturday, her lawyer and husband Kamotho Waiganjo confirmed the submission of the evidence in 40 cartons but lamented the escalation that the matter.

The MCAs, who spent a night in the precincts of the county assembly before the impeachment day, accused Waiguru of over abuse of office, gross misconduct, and manipulating the public procurement procedures.

They also accused her of illegally conferring a benefit of Sh10 million to herself for travel allowance.

The governor was ousted on June 9, 2020, after 23 out of 33 MCAs voted in support of her impeachment on the charges of violation of the Constitution, abuse of office and gross misconduct.

Four MCAs abstained and six of the ward reps were absent during the movement of the motion.

The motion was tabled on March 31 by Mutira MCA David Kinyua Wangui who faulted the governor for deliberately failing to submit county plans and policies to the County Assembly for approval.

Amidst this is dissent from a section of Kirinyaga MCAs and some senators who are of the view that the constituents may not be able to get justice. The leaders claim that the Senate committee may be inclined to save the governor against all odds.

A total of 45 senators out of 60 voted in favour of the committee. The remaining 14 wanted plenary hearing to handle the matter with one senator abstaining

According to the directive by Senate Speaker Kenneth Lusaka, the committee would start investigating Waiguru immediately and would present a report after 10 days, making June 26 the last day for her to know her fate.

Tangatanga allied senators opposed the select committee, saying it will save the embattled governor.

The opponents of the committee were led by Elgeyo Marakwet Senator Kipchumba Murkomen who said the formation of the committee will be an injustice to the people of Kirinyaga, whose funds Waiguru has been accused of embezzling.

“To the people of Kirinyaga I am sorry, we did our best but It is finished Your fight for accountability has been frustrated by Senate don’t give up use other avenues,” he said.

Through the constituted select committee.

“Senate has sanitised and cleared the Governor of Kirinyaga. It’s done. Don’t wait for the Committee’s decision,” he said.

But Siaya Senator James Orengo, in defence of former Devolution Cabinet Secretary, said that her tribulations were being propagated by outsiders who were using Kirinyaga leaders.

Here are the highlights from the Senate committee hearing:

Says Senator Kirinyaga Ruebenson Kibiru had requested to attend the committee and was allowed to by the Standing Order 209 to attend the hearing.

Malala urges parties to desist from discussing the matter while still being discussed by the committee.

Says it is important to observe the 10 days given to decide the matter.

10.30 am: Charges are read to the governor while standing thereafter the committee will discuss any other matters. The clerk is reading the various charges against Governor Waiguru.

10.55 am: Malala calls for the hearing of preliminary matters. County Assembly says they have and governor’s side also prepares.

Kirinyaga County Assembly: Files application based on the legal principle of fair hearing. County Assembly lawyer says the assembly has not been able to verify authenticity governor’s travel documents. Says document on travel is not clear on entries and exits to the particular countries. Also, want original travel documents especially passport to verify travel history.

County Assembly lawyer says a receipt provided by the governor is not clear. Says they cannot deduce content, the purpose of payment and the bank.

Asks: “What was their evidence that the governor had not travelled?”  Says governor’s response cannot be assembly’s evidence to incriminate the governor.

Says they will share with the assembly and the committee the documents as requested by the assembly.

Nyamodi says allegations against the governor are contained in some documents whose evidence need to be tested. Says they request for admission of one additional person. Says the Assembly has summoned Carrilus Otieno who is a witness for the governor. Asks the committee to allow him to testify tomorrow.

Assembly lawyer Ndegwa: Says the governor is overlooking the pieces of evidence provided adding that the defence have only used the particulars of the motion as the evidence, not knowing that there is a legal provision to adduce more evidence besides it.

Ndegwa says both sides are seeking for justice and asks the committee to quash the objections by Nyamodi, lawyer’s governor. Also says the there are no new pieces of evidence. Also argues that there is no legal provision requiring some arrangement and pagination of documents as alleged by the defence team.

Nyamodi: Says he received the documents as was presented to him by the county assembly lawyers.

Malala: Directs Sergeant-at-arms to help in facilitating the entry of the person requested by the defence team into the House. Senator Malala says the committee will be back in 30 minutes with the ruling on preliminary matters.

12:50 pm: Committee resumes its work and Malala delivers rulings on the raised issues.

Malala directs the governor to provide clear copies of documents by end of today.  The committee allows John Otieno to be allowed to appear before the Committee to appear tomorrow for cross-examination.

The committee notes that it would have been desirable for the assembly to present well-paginated documents. Orders that they provide them.

Committee rules that parties should canvass about the introduction of new pieces of evidence and say that the same should follow the law.

Allows opening statements from both parties 30 minutes each then lunch break will follow.

Assembly lawyer Mr Ndegwa: Says the committee that they are looking at a complex case of corruption and mismanagement of resources.

Says they have witnesses to testify and prove that Governor Waiguru had her hands in the cookie jar and had influence in procurement and tendering in the county.

Says Article 10 (1) (2) bound governor Waiguru and no one is exempted.

He also says they will give evidence to show that the governor has cases of nepotism and misuse of power. Says some staff members of the governor lack the required qualifications to hold such offices. Says some positions were created illegally. Says he’ll be calling five or four witnesses to justify the impeachment of Waiguru.

Says it is done to protect public resources and finances. Says they will be able to prove that governor Waiguru does not portray a good example to current or future generations.

Claims Chief Officer Mugo Ndathi won many tenders at the county and was irregularly hired. Says governor did not travel to countries as alleged despite being paid travel allowance.

Claims county governor money was spent to open up a ghost coffee shop in the US.

Governor Waiguru: Says she believes in MCAs’ right to carry out their duty if circumstances exist to carry out an exercise like an impeachment.

Says the courts have severally given directions to acquire high threshold on grounds to remove governors. Says an impeachment motion should be reliant on the rule of natural justice. Says she received the notice at 10 am when the debate was already going on. She says she was never given a hearing.

Claims the impeachment motion is based on malicious allegations which cannot form grounds of her ouster. Says allegations relate to minor administrative issues which could have been solved internally.

She says she has delivered two addressed to the Assembly and one is scheduled for September 2020. She says the participating bidders never appealed the award of the tenders.

She says there was no Sh50 million tender given to Velocity Company nor Sh30 million. She says the purchase of governor’s vehicle was approved by the assembly and purchased through government’s legal channels.

Says purported payments to her office are all cooked entries. Tells Committee that most governors are at the mercies of the MCAs. Says MCAs hold budget passing ransome and intimidate governors with impeachment every time.

Lashes at Kirinyaga MCAs for sleeping in the county assembly on the day of her impeachment and roughing up colleagues who raised points of order. Asks the committee to declare the process an abuse of office by the MCAs.

Nyamodi: Says the county assembly must adduce evidence to prove their allegations. Says they have no doubt that the Committee will follow the law.

Malala: Adjourns the meeting for a 30-minute lunch break.

Declines the governor’s claim that she did address the county assembly twice as she claimed.

Members of the committee claim they do not have copies of the letters referred to by the witness of the county assembly.

Claims governor prevailed on County Public Service Board and coerced the board to hire Pauline Kamau despite her being less qualified.

It doesn’t look good - Aguero's City season could be over

By David Njaaga | 10 hours ago