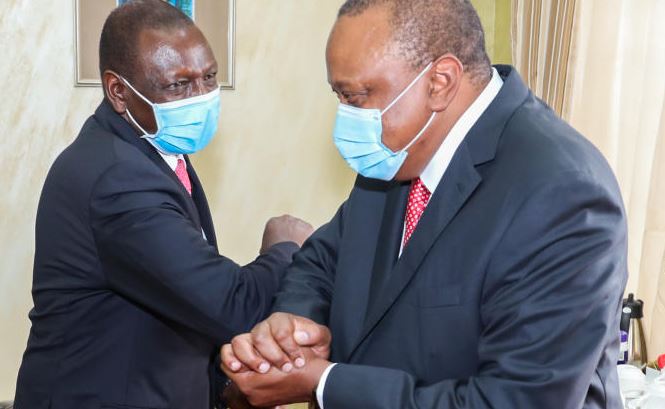 Allies of President Uhuru Kenyatta have dared his deputy William Ruto (both pictured) to quit the Jubilee Party and form a new outfit, a day after the embattled DP unveiled a parallel party office.

Jubilee Party vice-chairman David Murathe said the rival team was free to form a new party but vowed to block any attempt to register Jubilee Asili.

Yesterday, Murathe said they will not allow any political grouping to confuse Kenyans by registering a party bearing a similar name and slogan as that of the ruling party.

“If they want to move to something else they are good to go. Good riddance. These are people who had promised to work from the Jubilee headquarters but now claim they have been denied access,” said Murathe.

“You cannot purport to have a party that appears to share a name and slogan with another because it will confuse people. We have the copyright of Jubilee, so they cannot list another party with that name,” he added.

He said ‘Tuko sote pamoja’ – the slogan by the rival camp – and clenched hands symbol resemble Jubilee Party’s symbols and would cause confusion. But Ruto’s ally and Elgeyo Marakwet Senator Kipchumba Murkomen dismissed claims that they were planning to ditch the party.

Murkomen said Jubilee Asili Centre is just a venue for political meetings by Jubilee leaders who have been denied access to the party headquarters.

“Ignore the rumours doing rounds. Jubilee Party is our party, our labour of love and visionary investment, whose fruits we look forward to enjoying. Jubilee Asili Centre is the meeting venue for and by members who have been denied access to our party office on Thika Road,” said Murkomen.

Another Ruto ally, Cornelly Serem (Aldai), however, hinted they may consider reserving the name before listing it for 2022 contest.

“If our concerns are not addressed, we will register a Jubilee Asili party with the support of majority legislators then we leave them with a shell of the old Jubilee,” said Serem.

Murathe said Ruto allies can run the parallel office but must continue making monthly contributions for the running of Jubilee’s Pangani offices.

“I heard them say they will contribute to pay for the new office space. They can go ahead but they have to continue remitting their monthly subscription fee. It would be a matter of disciplinary action if anyone stops making the payment,” added Murathe.

Kieni MP Kanini Kega said the party may consider kicking out members of the rival team if it is established they are pushing a different ideology or have formed a new party.

“Jubilee is the party that sponsored them to Parliament. It goes without saying that if they engage in a different ideology or deemed to have participated in the formation of another party, we will not hesitate to expel them as per the party constitution,” said Kega.

In Nakuru, a number of leaders criticised the establishment of parallel offices saying it would sabotage the ruling party. Nakuru Town West MP Samuel Arama said any move by Ruto allies to form a new political outfit similar to Jubilee was misguided and amounted to sabotage.

“It is a very serious offense for the DP to entertain leaders and a faction claiming to have opened am office parallel to that of the ruling party,” said Arama.

The legislator instead called on the disgruntled members to reform their ways.

“Those who were removed from house committees and other leadership positions should accept their mistakes and apologise to the President. Thereafter, they can be retained in their respective committees,” he said.

Arama accused those removed from House leadership positions of pushing the President to the edge prompting him to take punitive action against them.

“Every time the President was waking up to messages urging him to support a particular person until he became tired of it. They should also know that if Kenyans decide that Uhuru should continue with leadership beyond 2022 that will be final,” he said.

His sentiments were supported by Nakuru Town East MP David Gikaria who called on DP Ruto to live up to his pledge to stay in Jubilee. “I wouldn’t advice the DP to open a new office or form a new party altogether,”said Gikaria.

“Starting another party does not make sense. He is a believer of democracy and when there are challenges in the Jubilee Party, the best thing is to find solutions within the party,” he said.

The MP said the initial intention of forming Jubilee Party was to have a formidable political party based on ideologies; one that would unite Kenyans beyond personal and ethnic differences.

“Kenya needs a maximum of three big parties with a set direction. Some parties have been turned into conduits for enriching certain people who collect money from members for unjustifiable reasons. As much as we are a multiparty democracy, the DP should cool down and sit down with his boss on the issues,” he said.

At the same time allies of Ruto have dismissed the co-operation agreement between Jubilee and Wiper Party of Kalonzo Musyoka and Chama Cha Mashinani of former Bomet Governor Isaack Ruto.

“Those jumping into other political parties have lost direction in their outfits. Parties are just outfits but what matters is the people who follow you,” said Sudi.

Kositany said: “Those behind boardroom decisions are at liberty to do what they feel is best for them. Our party will remain behind DP Ruto. So they should not waste their energies in fighting him. They know they will face Ruto in 2022.”

Kositany said there were other political vehicles if Jubilee failed to accommodate Ruto’s supporters.

The legislator said Jubilee has absolute majority in the National Assembly, Senate and in the Council of Governors and questioned the motive behind the new pacts with smaller parties.

Kositany claimed Jubilee was becoming undemocratic, and that a recent parliamentary meeting at State House only lasted 23 minutes and members were not allowed to make contributions.

Uhuru’s pick is an insider at the National Audit Office.

Politics at the centre of governors, assembly wars
Feedback