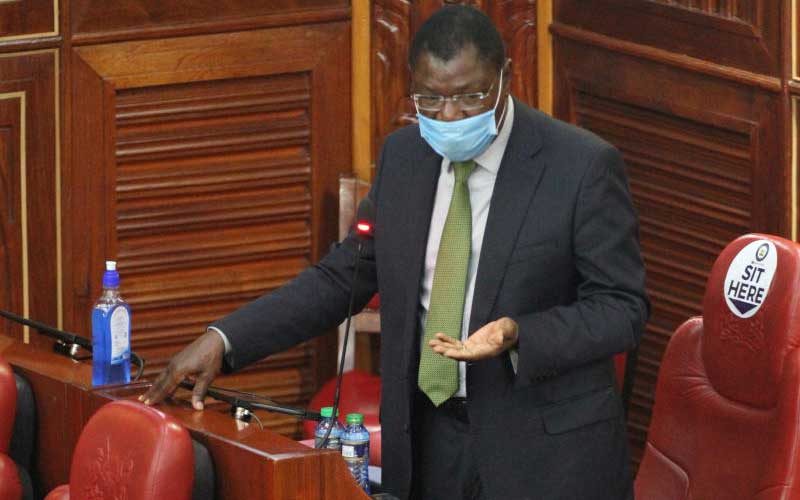 Embattled Bungoma Senator Moses Wetang’ula (pictured) has seven days effective today to save himself from ouster from the Ford Kenya party leadership.

This is after the Registrar of Political Parties Anne Nderitu on Monday gazetted his removal from the helm of the Lion party, a move that if unopposed, will hand over the leadership to Wetang’ula’s rivals.

The registrar has now called for written submissions concerning the mutiny to submit them to her office.

"Any person with written submissions concerning the intended change by the political party, shall within seven days from the date herein, deposit them with the Registrar of Political Parties," she said in a special gazette notice dated June 8.

It set off a similar coup that saw Wetang’ula dismiss the legislators behind his removal from the party leadership, describing them as "cowards".

He announced the suspension of party Secretary General Tongaren MP Eseli Simiyu, who had communicated his ouster, to be replaced with Chris Wamalwa in an interim position. Wamunyinyi was also suspended.

The two warring factions then trooped to the Office of the Registrar of Political Parties to file documents as the bonafide office holder.

On June 4, the Registrar, in her arbitration of the dispute that has rocked one of Kenya’s oldest political parties, dealt Wetang’ula a blow after noting the National Executive Council (NEC) that ratified his own version of the coup did not meet a quorum.

"The NEC and PG meeting held on May 31 did not meet the applicable quorum to hear and determine disciplinary matters and the Statutory form PP7 on Notice of Change of Party officials was not filed," she wrote to Wetang’ula.

Ms Nderitu, on the other hand, asked Kanduyi MP Wafula Wamunyinyi’s team to rectify the anomaly observed in the statutory PP7 form, where a member who was not authorised to sign the document signed it.

"The statutory form PP7 was not properly signed by the authorised officials as per the records held by this office. In this regard, you are kindly guided to address the issue highlighted above and appraise us on the same," said Nderitu in a letter to Ford Kenya Secretary General Eseli Simiyu.

Wamunyinyi’s team regrouped, resubmitted the amended Form PP7 and published the notification of the changes in the dailies as required by the Political Parties Act.

The submissions invoked by the registrar, if unchallenged, is the last stage of changing party leadership according to Section 20 of the Political Parties Act.

"The political party may, after taking into account any representations received from the public under subsection (1) and (2), effect the change or alteration in accordance with its constitution and rules," the Act states.

By Willis Oketch and Patrick Beja | 8 hours ago