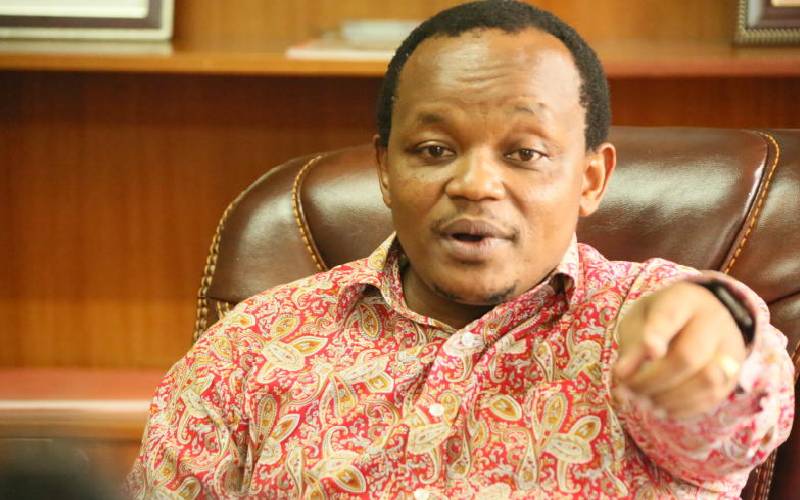 Nyeri Town MP Ngunjiri Wambugu has warned Deputy President William Ruto against resisting the imminent purge in the National Assembly against his allies, saying such move will finish him politically.

Wambugu who spoke after the humiliating ouster of Tharaka Nithi Senator Prof Kithure Kindiki as Senate Deputy Speaker on Friday, cautioned Ruto against daring President Uhuru Kenyatta if he wants to survive the political storm.

“The guys who advise Ruto should tell him to allow the President to make the changes he needs in the National Assembly without issues,” he said.

He told DP Ruto to advise his allies in the National Assembly not to stage a fight like their counterparts in the Senate, but instead, resign and pave way for the changes.

“Ruto should tell any of his allies targeted to be removed to resign, quietly. Another day like today - and he’s done for good.”

Wambugu (pictured) was referring to a humiliating ouster of Tharaka Nithi Senator Prof Kithure Kindiki as Senate Deputy Speaker after Ruto allies vowed to defend one of their own.

After the motion was put to a vote, Ruto allies could only garner seven votes against 54 after all the hubris and threat.

After losing the vote, Nandi Senator Samson Cherargei, a Ruto ally, condemned the exercises, adding that it marked the death parliamentary democracy in the country.

“The agents of the axis of the evil have succeeded to turn the Senate into an accomplice of a political guillotine, conmanship, witch hunt and expediency. It’s sad that parliamentary democracy has been vanquished completely,” he said.

His Kericho counterpart Aaron Cheruyiot condemned those who voted out Kindiki, saying they were protecting their political sins.

“The propensity to vote yes in the Kindi ouster motion is directly proportionate to the amount of dirt in one's closet.”

Elegoyo Marakwet Senator and his Nakuru counterpart Susan Kihika were the first casualties when they lost Majority Leader and Majority Whip positions respectively after failing to attend the Senate PG meeting at State House.

Even though they went to court to contest their ouster, they were unsuccessful.

Previous article
With the stick in her hands, Ommala keeps winning awards
Next article
Pregnancy made me hate my husband's voice, cooking