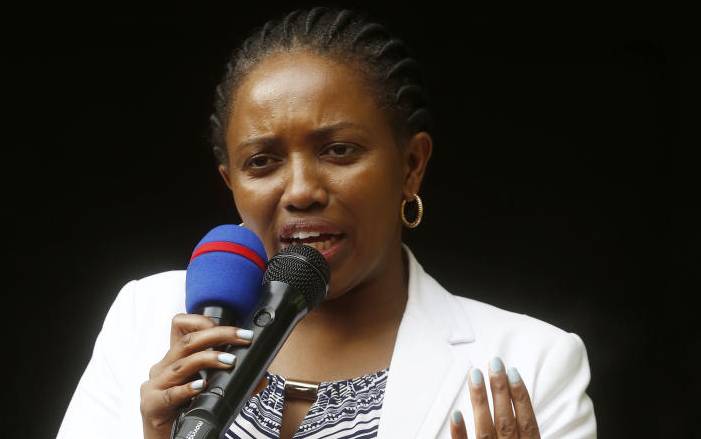 President Uhuru Kenyatta has chaired Jubilee Senate Parliamentary Group meeting which has proposed changes in the top Senate positions dealing a blow to Deputy President William Ruto and his allies.

His Nakuru counterpart Susan Kihika (pictured) who held the position of Senate Majority Chief whip has since been de-whipped and replaced by her deputy, Murang’a Senator Irungu Kangata. In the meeting, Nominated Senator Fatuma Dullo Adan from Isiolo County was also picked as the Deputy Majority Leader, and Nominated Senator Farhiya Ali Haji was settled on as the Deputy Majority Chief Whip.

It read it part: “His Excellency the President today at State House, Nairobi chaired a Jubilee Coalition Parliamentary Group meeting that brought together Senators from Jubilee Party and the Kenya African National Union (KANU).”

“During the meeting, attended by 20 Senators, the Parliamentary Group meeting resolved to strengthen the Coalition's Senate Leadership and elected the following new leader.”

However, DP Ruto’s aide Dennis Itumbi rubbished State House statement saying that it lied about the number of the legislators who attended the meeting.

“State House has lied in an official statement. That meeting only had 15 people. If they had numbers watoe list na picha. Chopper sent for Senator Ali, rejected. Senator Naomi Waqo stood her ground too,” he tweeted on Monday afternoon.

Uhuru congratulated the team, which comprises Jubilee and Kanu leaders for their new positions and pledged to work closely with them.

“The President who is also the Party Leader of the Jubilee Coalition said he looked forward to working closely with the new Senate Leadership in delivering services to Kenyans,” reads the statement from the PSCU.

Standard Digital cannot still ascertain whether DP Ruto and the senators who have been stripped of their positions attended the PG meeting.

“How can you be given a job and you start fighting the one who gave you? Where on earth? Their removal has been long overdue. We need order and focus in the party,” he said.

Another source, who requested anonymity told the Standard that party rebels would be squarely dealt with at the meeting.

“The meeting is on. Murkomen and Kihika are the targets. It was long overdue. They will serve as an example to the rest. If they make good their threat to stop their monthly subscription, we will de-whip them. If they go against the party, we will withdraw membership and send them back to the electorate to seek a fresh mandate.”

Previous article
Premier League presses on with 'Project Restart' despite mounting problems
Next article
Pregnancy made me hate my husband's voice, cooking