Wiper to consider union with Jubilee and Kanu, says Kalonzo 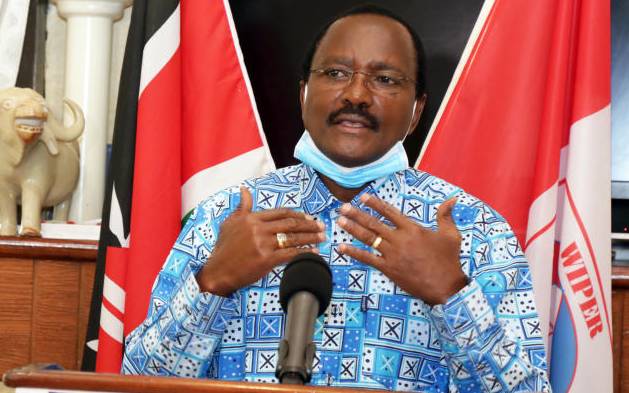 Wiper Party will in the future consider forming a coalition with the ruling party Jubilee and Kanu ahead of the 2022 poll, party leader Kalonzo Musyoka says.

Speaking to a local TV station, the former vice president said that the party was still examining options on what political path to tread ahead of the 2022 General Elections. He said that Wiper could join Jubilee and Kanu in forming a political coalition but such a move would only be sanctioned in accordance with the agreement the party signed with its partners under the Nasa Coalition.

“Wiper will be ready to enter into a co-operation agreement with both Kanu and Jubilee when that time comers. We are open to that but right now we are guided by the provisions of the coalition agreement we have within Nasa,” said Musyoka.

Kalonzo (above) said that his party and other Nasa coalition affiliate parties were committed to ensuring that the country returns to normalcy from the ruins of Covid-19 pandemic.

“As Wiper, we are also consulting with Coalition partners in ODM, ANC and Ford Kenya to be able to see what we can do because I think what the country needs to do is to come together regardless of political persuasion in order to jumpstart the economy,” he stated.

But when prodded further on the details of the probable partnership with the two parties, especially on what Wiper would like to achieve, Kalonzo said that the party was still in Nasa but would consider teaming up with like-minded entities.

“We all have to look to the future my friend…but what I am saying is the initial stage is to think of a co-operation agreement and not the coalition agreement because at this time we have our Nasa Coalition.”

He said that the decision was reached by the party after its members held a virtual National Executive Council meeting which he described as well- attended. Kalonzo said that the NEC sanctioned negotiations and weighed upon the legalities binding the party owing to the association with Nasa. He, however, said that top on their agenda is uniting the country and helping in the fight against coronavirus pandemic.

His sentiments came in the wake of a Jubilee Party Parliamentary Group meeting slotted for Monday (today), in which will be hosted by President Uhuru Kenyatta at State House, Nairobi.

The Standard reported on Monday that Elgeyo Marakwet Senator Kipchumba Muurkomen who is the Senate Majority leader and his Nakuru counterpart Susan Kihika who holds the position of Chief Whip, may all be stripped off their positions after they defied the party. Jubilee vice-chairman David Murathe told the Standard yesterday that the duo would be removed.

“How can you be given a job and you start fighting the one who gave it to you? Where on earth? Their removal has been long overdue. We need order and focus in the party,” Murathe said.

The meeting comes after Uhuru led Jubilee into signing a post-poll agreement with Kenya's oldest party Kanu, which is expected to sail into 2022 poll.

Also, Murang’a Senator Irungu Kang’ata is considered as a possible replacement for Senator Kihika and Nairobi Senator Johnstone Sakaja as his deputy.

Last week, Senator Moi sent donations to Kalonzo Musyoka Foundation for the fight against Covid-19 pandemic. This spurred speculations of a possible political plan being crafted by the two-party leaders.

By Moses Nyamori and Patrick Beja