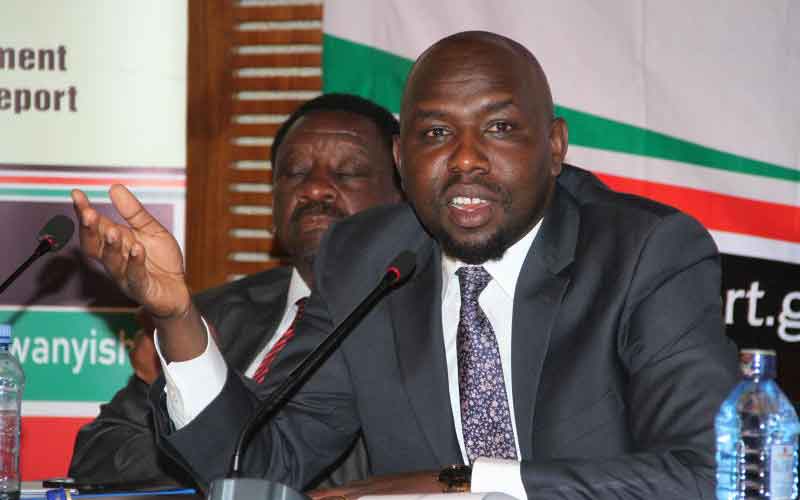 National Assembly Majority Leader Aden Duale has called for the resignation of his Senate counterpart, Kipchumba Murkomen, (pictured) for failing to champion Jubilee Party's agenda in the House.

Duale made the demand amid escalation of a spat pitting them over the role of Parliament, with Murkomen describing the Garissa Township MP as a 'sycophant' of the Executive.

Speaking to a local TV station on Tuesday night, the two leaders tore into each other over claims by Murkomen that Parliament had lost its independence to oversight the Executive.

The bitter wrangle between the two politicians – who are close allies of Deputy President William Ruto – comes in the backdrop of another battle pitting President Uhuru Kenyatta’s axis and that of the DP for the soul of the ruling Jubilee Party.

The Elgeyo-Marakwet senator claimed a cartel in the National Assembly has been working in collusion with the Executive to frustrate Parliament. He went on to describe President Kenyatta’s administration as a “functional dictatorship”.

He accused Duale of being a sycophant and abandoning his oversight role.

But Duale told off Murkomen, saying he cannot be Senate Majority Leader and at the same time fight government agenda in the House.

“If the Senate is dead, the honorable thing for Murkomen to do is to resign. You cannot go out there and say you are the Leader of Majority Party in the Senate while on the other side of the mouth you are accusing your party leader,” said Duale.

He further told Murkomen that he cannot run the office through Twitter, in response to his earlier tweets on how Parliament has been reduced to mere rubber stamp of the Executive's agenda.

Interestingly, Duale is calling for Murkomen’s resignation at a time when there has been a separate push to have the two of them kicked out of the positions for “sabotaging” Jubilee agenda in the two Houses.

Previous article
Tuju now blames DP for dispute in Jubilee
Next article
Pregnancy made me hate my husband's voice, cooking