Netizens take Khalwale challenge to the next humorous level

The last two days to Kibra by-election was characterised by all kinds of sideshows that provided fodder for Kenyans on social media towards the end of the week.

On Thursday during the elections, former Ikolomani MP and Kakamega County Senator Bony Khalwale and Kimillili MP Didmus Barasa found themselves on the wrong side when they went to Kibra or 'bedroom' as is now called, to drum up support for Jubilee candidate Macdonald Mariga.

A video and photo doing rounds on social media on Friday and at the weekend, showed Khalwale throwing stones to a certain person who was chasing him with stones too.

Using trending hashtag #KhalwaleChallenge, netizens created all kinds of humorous pictures of stone-throwing challenge, as some blamed him for also throwing stones to the person, an incident which they said lowered his stature as a leader.

While Khalalwe was spotted holding stones in the hands, clever Kenyans instead came up with various items like mandazis commonly called KDFs among other items.

Another meme was circulated on Sunday morning showing the former legislator holding stones and consulting with Arsenal FC manager Unai Emery after the Gunners lost two-nil to Leicester City in English league match. 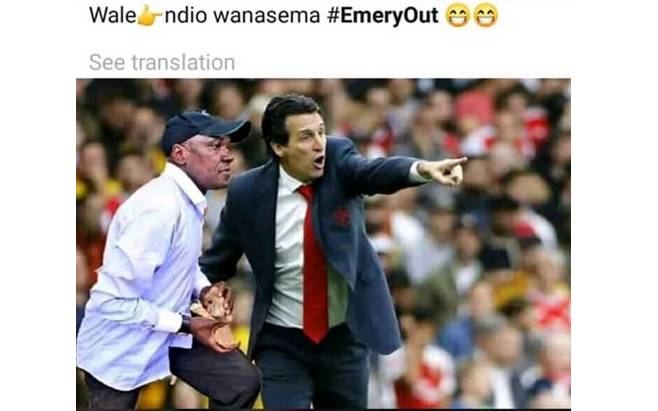 The incident of stone-throwing attracted bashing from netizens the entire Friday, blaming him for the also participating in stone-throwing.

For Captain Dominic, what he did was not supposed to a person of his caliber considering he is a leader.

But to some, anyone could have done the same thing when found in such situation Khalwale was in self-defense .

@ArapTilingi tweeted: Have you ever been in such a situation as a man where you are eye to eye with the enemy? This is the point you can't even blink or turn your back. This is a point of no retreat, face your enemy head on. @KBonimtetezi you have shown your masculine skills to be high.

@Nichonasri1 : I respect @KBonimtetezi for courageous entering Raila Odinga bedroom without fear,  @KBonimtetezi is the right person that we will not let go cc. @WilliamsRuto #KhalwaleChallenge.

Dr Khalwale, who describes himself with many titles on his verified Twitter handle profile as “Son of a traditional industrialist, cultural icon, Kenyan doctor/politician, student of integrity and anti-corruption, advocate for the truth and the greatest”,  stayed away from commenting on the stone-throwing incident  but just congratulated Mariga for the votes he got.

“Congratulations @MarigaOfficial for this result. @MusaliaMudavadi and @Wetangulam spoilt your 5,275 and 260 votes respectively through their candidates. Thousands of your would be female voters were scared off by those @TheODMparty goons. You are the winner,” tweeted Kwalwale.

Barasa on his part was seen in an altercation with Dagoreti MP Simba Arati before he was roughed up and slapped as he was carried by unknown men and his beloved signature red cap was taken away.The red cap became the talk of town.

In a clip that went viral on social media, Arati was heard asking his colleague if he wanted to run again as Barasa pleaded with him saying they were colleagues before youths descended on him.

The incident caused an uproar on social media as netizens and Jubilee MPs called on Arati to be arrested for allegedly unleashing youths on Barasa.

@DidmusWaBarasa tweeted: Since the @DCI_Kenya, @DPPS_KE
and @IG_NPS have remained mum over the violence meted against me by @SimbaArati and the international slay queen @Hon_FatumaGedi
, this inaction represents a vote of confidence to the goonism by @InteriorKE.

Arati later on Saturday defended himself saying he is the one who saved him from the mob after word went round that they were bribing voters.

“Sadly, I am being blamed yet I saved my brother from the wrath of the youths who had been told that Jubilee legislators were on the ground to buy voters,” said Arati on phone.

“It is wrong for people and even you the media to report that I unleashed youths on Barasa. It is me who saved him.”

Arati, the ODM legislator denied taking or seeing the red cap saying he was busy protecting other leaders from the youths.

“I hope we will find Didmus’s cap in one of the rallies very soon, but I didn't see anyone pick it, because I was shielding the female colleagues from the mob.”

It’s later that the word bedroom was also birthed and became a sensation to mean Kibra, Raila Odinga’s strong hold.

By Kennedy Gachuhi and Julius Chepkwony | 6 hours ago