It is a heated political environment as 19 candidates fight for the Kibra Parliamentary seat.

The campaigns have not in any way taken a new dimension: everything has been done in the 'Kenyan way'. Like in the General Elections where presidential aspirants traverse the country discrediting opponents and making inimical remarks, the Kibra campaign is a cut –and-copy affair.

"Are you going to vote for someone who must be spoken for? Assuming Mariga is voted in as the MP, will he call MP Nixon Korir to come and speak for him when processing your bursaries?  And, Mr Korir should declare how many constituencies he wants to lead," Sifuna posed.

True to script violence is part of the game.

On October 12, 2019, Jubilee candidate McDonald Mariga's was stoned as he campaigned. On Yesterday, ANC Party leader Musalia Mudavadi's convoy was also pelted with stones as he campaigned for his party candidate Eliud Owalo.

But amidst the fracas and mudslinging are campaign promises buried in obscurity, some realistic, ridiculous.

A tweet by McDonald Mariga on October 21, 2019, goes: "Nothing can stop a dedicated heart."

Attached is his portrait and campaign promises. In the poster, Mariga vows to bolster educational programmes for secondary and post-secondary students, institute mechanisms for solving unemployment and training the youth.

But while campaigning for him in Kibra on Sunday, Deputy President William Ruto made more promises.

"If you are a resident of Kibra, as the Jubilee government we want to construct houses, so that if you are paying, for instance Sh4,000 or Sh5,000, after 15 years the house becomes yours," said Ruto, as he addressed residents in Lindi Grounds.

The DP further promised to ensure that a training college is built in Kibra to address unemployment in the area should Mariga be voted in.

Earlier this month, Mariga told the residents that his door would be opened for all students seeking bursaries without looking at their social backgrounds.

He insinuated that the current leadership at the CDF was discriminating against some cases in giving the bursaries.

On October 25, 2019, the former Harambee Stars international, promised infrastructure and trade projects for the Kibra residents.

Among them was the plan to work together with the National Treasury to give funds to the (Small and Medium-Sized Enterprises) SMEs and come up with Kibra Ujenzi Council to spearhead the infrastructural development. 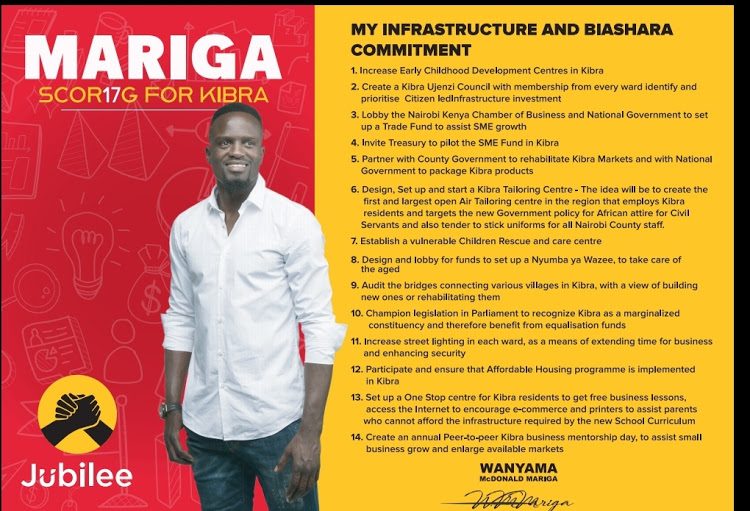 He says he will continue with the projects initiated by the late MP which include Mbagathi High School which was built with the Constituency Development Fund.

"Through Uchumi Bora initiative, I look forward to hosting a quarterly Jua Kali Trade Fair Exhibition which will aim at providing entrepreneurs with a platform to present their products to a vast range of customers thus sourcing for markets as well as capacity building," he posted on October 3, 2019.

Like his rival, Mariga, Okoth sees vocational training institutions as the best bet to solve the menace of unemployment in the Kibra Constituency.

After decamping from the ODM party, where he was once a staunch ally of former Prime Minister Raila Odinga.

As Jubilee and ODM made was choosing its candidates, Mr Owalo had hit the campaign trail knocking on doors for votes.

Pictures of him mingling in the dingy alleys of Kibra were circulated on social media as he rolled out his campaign.

In a sleek piece of art posted on his Facebook page, Owalo mentions the establishment of Technical and Vocational Training Colleges (TVETS) as the remedies for unemployment.

He also promises five job centres per ward in the constituency. In the campaign slogan "Liwe Liwalo ni Owalo", he makes other vows among them affordable housing, sports development and improved healthcare.

Although little maybe be known about Khamisi, he has packaged himself as a candidate who grew in the area and is in touch with the problems of the people.

Like his rivals, Butichi promises improved services in the realms of education and economics.

"Hatutaangalia jina ya pili ya mtoto. Nitaangalia mshara na malipo ya vijana wanaofanya kazi ya reja reja (We will not look at your second name when giving bursaries. I will also address the issue of salaries of youth employed in informal sectors)," he promises. ?

What betting fans need to know about Mariga and Joey Muthengi