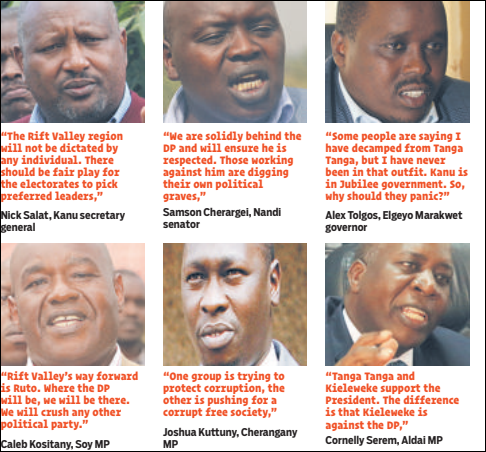 Uncertainty over the 2022 presidential succession is rattling the political order in the vast Rift Valley as camps question their positions and move to realign their political stars.

In what is shaping out as devolution of politics from the top to the bottom, the region’s political leaders -- in Kieleweke and Tanga Tanga -- are beginning to quietly question the trajectory of their politics as the reality of tough times ahead begins to dawn.

The doubts, fears and worries afflicting Jubilee at the top have opened new pathways for existing alternate political formations in the area, among them Kanu and Chama Cha Mashinani. Already, a number of leaders have made their moves, but more are expected to follow suit.

In the last two weeks, former Uasin Gishu governor hopeful Zedekiah Buzeki and Elgeyo Marakwet Governor Alex Tolgos have dumped their political camps for newer bases. Those left behind are putting up brave faces in the wake of emerging doubts as more leaders express frustrations.

“Both Tanga Tanga and Kieleweke groupings are in government and support the President. The only difference is that Kieleweke is against the DP. As our leader, the President should call a meeting to bring the two groups together,” says Aldai MP Cornelly Serem.

He said individual leaders are entitled to their own opinion, and giving example of 2013 election, said those opting out will be left behind: “When we backed President Kenyatta in 2002, former Cabinet minister Kipruto Kirwa and former assistant minister Stephen Tarus chose to remain with President Mwai Kibaki.”

But Kanu Secretary General Nick Salat dismisses group mentality approach to politics. He wants the various camps to simply show residents what they have accomplished in their electoral terms before pitching for 2022.

He says the independence party’s position is that focus ought to be placed on present challenges afflicting ordinary Kenyans ahead of intense campaigns or even realignments.

“2022 has been brought forward more than it should be and the fear is that it may cloud priority issues that affect citizens. Farmers are currently toiling with a myriad of challenges, including poor prices, lack of subsidies and high costs of operations,” he says.

Kanu, he points out, supports the government to achieve its goals to make life better for citizens. Closer to polls, he said, the full might of the party will be deployed in every corner of the country.

“The Rift Valley will not be dictated by any individual. There should be fair play for the electorates to pick preferred leaders,” he said.

Governor Tolgos, Kanu’s newest catch, says he does not regret his close association with Senator Gideon Moi. He says people should not panic over his move. “Some people are saying I have decamped from Tanga Tanga, but I have never been in that outfit. Kanu is in Jubilee government. So, why should these people (critics) panic?”

Cherangany MP Joshua Kuttuny believes Rift Valley residents have developed “second thoughts” ahead of 2022 because leaders have ignored the issues affecting them.

“Those at the top have failed to solve challenges affecting Kenyans. When farmers were demanding better prices for maize, cartels interfered because they did not want farmers to sell to the government,” Kuttuny said.

Kuttuny says his Kieleweke side is gaining political momentum and will surprise many in coming days.

“There are two ideological groups – Tanga Tanga and Kieleweke. One group is trying to protect corruption that is rampant while the other is pushing for a corrupt free society and it will be up to the electorate to make a choice” he said.

Soy MP Caleb Kositany, however, insists that any party opposed to the DP will be crushed. “Rift Valley’s way forward is Ruto. Where the DP will be, we will be there. We will crush any other political party,” says the Jubilee deputy Organizing Secretary.

He acknowledges the two Jubilee factions, but insists that the party is still united and committed to service delivery.

“Perceptions created by a few elements will not derail Ruto’s presidential aspirations. We are solidly behind the DP and will ensure he is respected. Those working against him are digging their own political graves and writing obituaries.”

But Moiben MP Silas Tiren says North Rift residents feel cheated because promises made during the campaigns, notably better prices for maize and milk and provision of subsidized farm inputs -- have not been met.

“Residents were promised so many things but nothing has come to pass. Those already in 2022 campaigns should first think about what they pledged,” he claims.

A guide to sorting out your financial mess

Here are the steps to solving financial mess.

By Nzau Musau | 3 hours ago