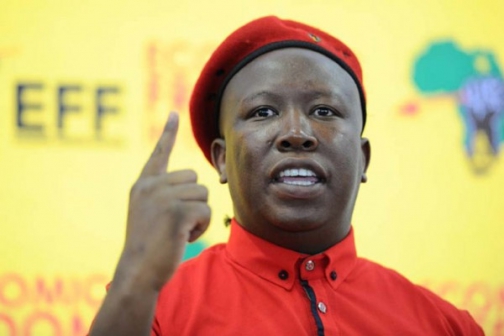 JOHANNESBURG: Julius Malema, who seeks nationalisation of mines and land and the curbing of white economic power, called on other opposition parties to unite with his Economic Freedom Fighters (EFF) to break the grip of the ruling party at municipal polls this year.

The ruling African National Congress (ANC) remains dominant and still likely to win, but enduring poverty 25 years after apartheid was ended in South Africa have eroded its support, especially among restive young people born after 1994.

Malema said the weak economy had raised the possibility that the ANC could lose control of either or both the commercial hub Johannesburg or capital Pretoria at the ballot.

"South Africans must shoot warning shots now, through their votes," Malema told Reuters in an interview.

"It is an opportunity now for South Africans to show the ANC that they are tired ... that the ANC should begin to take them seriously, ahead of the national elections in 2019."

Africa's most industrialized economy is struggling. The World Bank has forecast growth to reach only 1.4 percent this year and unemployment stands at 25 percent.

Even President Jacob Zuma, head of the ANC, has forecast a tough test from the opposition at the polls.

Malema - who points to the Johannesburg Securities Exchange as a symbol of the capitalism and white power his party aims to dismantle - said the ANC was still relying on the memory of liberation hero and former president Nelson Mandela to woo votes.

Many older South Africans feel grateful to the ANC for winning their freedom, ensuring the party unbroken power for the past two decades. But surveys show most people reaching the voting age of 18 are not automatically joining the ANC.

"The only thing they know is liberation, so they want to tell people about Robben Island," he said referring to South Africa's most feared prison which remains inextricably linked with Mandela, its most famous inmate.

"To young people those things do not appeal," said the former leader of the ANC's youth wing who fell out with party leader Zuma, referring to the so-called "Born Free" generation with no memory of white-minority rule.

ANC Secretary General Gwede Mantashe told a press briefing his party "is confident of retaining all metropolitan municipalities we currently govern and will be fighting to win the City of Cape Town" where the Democratic Alliance (DA) leads the Western Cape provincial government.

The EFF won 6 percent of the vote in the 2014 general election, while DA made in-roads with middle-class urban blacks despite a reputation as the party of white privilege, winning 22 percent of the vote. The ANC claimed 62 percent, down from 66 percent in 2009.

Despite its minority representation, Malema's party has caused waves in the usually calm parliament.

Security officials forcefully removed Malema after he disrupted Zuma's annual address in February last year, an unprecedented sign of discontent with his administration.

Malema was demanding to be allowed to ask the president when he would repay part of a $23 million state-funded security upgrade of his rural home. Zuma denies any wrongdoing.

The EFF leader said he backed the idea of a grand opposition coalition of smaller parties to take on the ANC.

"The ANC must be out of power in the local municipalities so they can begin self-correction ... We want to teach them that lesson through the coalition of the opposition," he said.

The World Health Organization will hold a special session on Thursday on the Zika virus as the U.N. agency comes under pressure for quick action against the infection linked to thousands of birth defects in Brazil that is spreading through Latin America and the Caribbean.

By Stephen Nzioka and Julius Chepkwony | 16 hours ago