They will tell you Chelagat Mutai died of heart attack, but they will not tell you the frustrations that created this in the first place. The awesome spirit died in solitude, poor and highly dependent on those who still cared to hang around her.

Poverty clawed at her heart and the torture of life in exile to avoid the grim walls of Kamiti prison haunted her spirit. Our legendary neglect for our heroes and heroines broke her spirit. In the end, the awesome phenomenon who signed off her phone messages as PCM (Philomena Chelagat Mutai) retreated to a life of seclusion and drinking. She probably later stopped.

Outstanding women who stood up to be counted

Outstanding women who stood up to be counted

Drinking she did, probably to soothe her broken spirit and drown her frustrations and those who saw her in her final years will tell you she was no more the ebullient and unshakable spirit they knew in the 1970s, when she kept Mzee Jomo Kenyatta and later Moi goverments on toes after joining Parliament at 24.

Clearly, her life lost the handle during her three-year exile in Tanzania alongside Senator James Orengo.

Yes, in many ways PCM was responsible for the slide in her profile, the jump into a life of seclusion in poverty, and the loss of esteem and luckless battle with the vicissitudes of life. She could have been more responsible, hardy and resilient. She could have gone ahead to raise a family that would later in life prop her up. But she was not that kind of person; she lived her life in the trenches and when she crumbled, the thud of her fall resonated across the country.

Slowly she slid into oblivion, an object of pity and probably even fun in her rural home. Even her university education was not of much help given her troubled spirit.

However, she did not talk about it; she just slumped into the life of an ordinary Kenyan woman. If not at her father’s home, she was being housed by her former secretary at little-known Sunton Estate in Nairobi’s Kasarani area.

I had three memorable encounters with PCM. The first was on the glossy covers of the defunct Weekly Review. She was a fighter for the voiceless and the landless. She was in the league of late Martin Shikuku, Mashengu wa Mwachofi, Dr Chibule wa Tsuma, Lawrence Sifuna, Abuya Abuya, George Anyona, Koigi Wamwere, Raila Odinga, Masinde Muliro and Orengo.

Days on end my father, an educationist, would tantalise us with tales of PCM, her legendary courage and fearlessness. In his own way, he would proudly say she was Chebomuren (A woman with a man’s unbwogabble spirit).

The second encounter was in late 1990s in pursuit of her story. PCM, the fearless lioness had gone quiet, lost the fire to hunt and receded deep into the woods.

To reach her, I talked to my good friend Kipruto arap Kirwa, who was also from Nandi like her, unapologetic critic of Kanu’s excesses. Both shared a common denominator; admiration and overwhelming respect for their mentor, the late Jean-Marie Seroney. Kirwa would later rise to be a Cabinet minister in President Kibaki’s first term.

We set off with Kirwa, my pen and notebook on the ready,  to her place in Hurlingham Shopping Centre. The night before I was uneasy, tossed around by the anxiety to meet PCM, a lady I had never met but one the older and more experienced journalists like Phillip Ochieng, Bernard Nderitu, Kwendo Opanga, Job Githinji, Gichuru Njehia and Emman Omari, described as some form of living deity and a firebrand hard to crush.

One even said she was a flame that could not be extinguished, but this turned out to be wrong for later life broke PCM and forged her into a shy and forlorn former political superstar.

To reach her with Kirwa, we climbed the stairs of that block, which today has Sippers Pub in the basement, and went to the last floor. We then walked down the shabby and poorly lit hallway. By now, I was convinced she wasn’t living well; the place was to say the least untidy, with empty cartons and crates in corners.

When we came to the room whose door bore the number she had given us, we knocked but there was no response. But just when we were about to give up, we heard some sleepy groan and movement in the room. Then the doorknob turned, the door opened, and before us stood the legendary PCM, now overweight and in poor shape. She appeared tipsy; she must have had a long night. She was in an old sleeping dress and her room was in shambles, with the remains of last night’s food on the table. There was no television, just a small radio. It was just one room, and because it was small, we sat next to her bed.

The long and short of it is that she was not in a state to give an interview. So just to be kind to the fading tigress of Kenya’s politics, who had lost a job at Kenya Commercial Bank and a Government’s rights committee probably because of her lifestyle, we just engaged in the usual banter about Opposition and Kanu politics then. I left empty-handed, sulking about the death of my story.

Today, I bemoan the fact that she never got to tell it. She just retreated into the life of squalor and solitude and death took advantage of her poverty, lifestyle and broken spirit. Perhaps if Kenyans embraced her, their warmth would have taken her far and resuscitated her frail spirit.

I heard little about PCM for the next 12 years, and all wasn’t good news. Then in June 2011, she called our landline and left a message I call her back because she needed help. I called back and found she was devastated and heart-broken, nursing an injured spine.

This is the message she sent me on June 9, 2011 after we had spoken: “Chamgei arap Tanui, glad to talk to you today. Please help me contact two people — Franklin Bett and (Langat) Magerer. I am undergoing treatment for leg injuries from accident, causing immobility. I need support from GoK through Prime Minister (Raila Odinga). Please see a way to give the message that I would like to reach them.”

She went on: “It has not been possible to speak to them through official means. Request for (phone) numbers I would use. And by the way we met long ago. You were with Hon Kirwa. At that time your voice sounded Nandi in tone…”

I was so touched by her humbleness and her suffering seared my heart. I talked to my former colleague Dennis Onyango, who was then Raila’s top pressman. Matters moved fast, Raila swung into action and the story was soon beaming on television. But I must confess it took a lot of persuasion for her to accept cameras to film Raila, Orengo and Prof Anyang’ Nyong’o’s visit to her modest residence. “Jitters are about publicity at a time when I am down. But you have calmed my worries. Please bear with me. So come when you are ready,’’ she wrote to Onyango and forwarded to me when she finally accepted the visit to her place.

“I am glad and honoured by your fast response to my SOS. Will go to hosi and be out by 1pm. Will call you then set up a meeting through a messenger who will wait for you at Naivas, Kasarani. This is because Sunton/Kasarani where I stay has no street names. I am here because of cost and access to hospital.”

This message summed up the bad weather PCM ploughed through in her final years. But even in her State, she held onto her pride and dignity, as demonstrated by a message she sent on August 15, 2011: “The hospital said they are not looking for any money from me because they have sent the bill to the PM. I will not discuss upkeep matters with PM.”

Talking to her, I was unsettled given the disconnect between the ebullient and fiery spirit of her radical days at University of Nairobi and Parliament. “I have this feeling that I take too much credit for unfinished business. I am publicity shy actually…” she told me, headlining the punctured spirit that now dogged her.

Perhaps it was this modesty, shyness and broken-heartedness that made her seek help when it was too late. But it was also her nature; she didn’t want to burden anyone and she suffered in silence, and finally died.

Go in peace PCM, may the angels be kinder to you than life was. 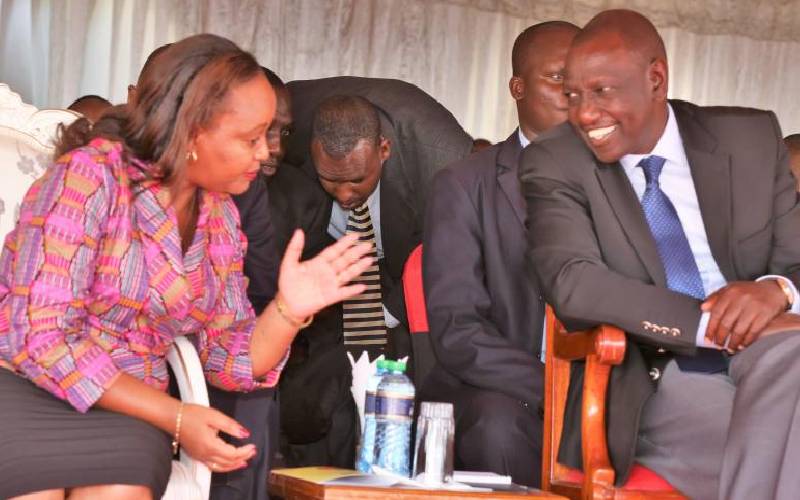 By Stephen Nzioka | 10 hours ago