Western Province, the region that had the distinction of having the highest number of presidential aspirants, remains without a clear favourite as the contest enters the homestretch.

The region, which originally had five presidential aspirants, has been like the biblical lamp that was lit and hidden under the table because of selfishness, greed and perceived historical animosities that have undermined unity.

Mudavadi has finally been evicted from the Jubilee Alliance and is now on his own. Wetangula and Wakoli are in the Cord, but not near number one and two. Wamalwa and Jirongo who had formed Pambazuka alliance are feuding after the Justice Minister declared himself the presidential candidate and entered another political deal with Assistant minister Peter Kenneth and former Foreign Minister Raphael Tuju.

“The region is dogged by internal divisions on clan lines. What is required is an innovative leadership that can overcome the divisions for the Luhya leadership to be taken seriously on the national stage,” says political scientist Amukowa Anangwe, a former minister who comes  from the region.

Former Livestock PS Kenneth Lusaka argues the region requires leadership that respects the community, and that unity should not be about political parties but honesty and integrity.

“We need leadership that cuts across party affiliations and sub-tribe interests to salvage this region,” added Lusaka, who is contesting the Bungoma County Governorship.

Jirongo told The Standard On Sunday that the region’s disunity had been perpetuated by strong State forces out to ensure votes are split to serve their vested interests.

“They first hoodwinked Wamalwa and later Mudavadi. On June 9, I made a statement in Lugari in which I stated that some six political parties were being funded by the State deliberately to lock specific ethnic groups into cocoons to kill the possibility of any party threatening a pre-planned transition game plan,” said Jirongo.

The Lugari MP went on: “It is sad that Wamalwa, after having watched the happenings of the last one week, would still want to be used to further the same project and destroy Pambazuka coalition.”

Wamalwa had earlier in the week staged a coup in the Pambazuka coalition, and endorsed himself its presidential candidate before entering a new alliance with Kenneth and Tuju.

The Saboti MP has also called an aspirants meeting in Kakamega today (Sunday), a meeting Jirongo has rubbished.

On his part, Mudavadi seem to be focused to run on a UDF ticket after his divorce with Jubilee.

“We are not alarmed. We are taking Mudavadi all the way to the presidential ballot as UDF,” John Chikati, a close ally of the Deputy Prime Minister who is contesting the Tongaren parliamentary seat, told The Standard On Sunday.

Anangwe says the Western votes will be split and that Cord was likely to harvest more votes in the region because without a strong candidate, voters will flock to Prime Minister Raila Odinga.

Luhya Council of Elders Chairman Patrick Wangamati says the region’s presidential aspirants should sacrifice their ambitions and back the Prime Minister, who stands a better chance of winning the presidency.

Lusaka, who is emerging as a voice of reason in Bungoma and Trans Nzoia counties where Wamalwa and Wetangula have been fighting each other politically, said it was regrettable for the Luhya to lack political focus.

While Wamalwa and Jirongo had pledged to support Mudavadi if he secured the Jubilee ticket, Wamalwa now wants Mudavadi to support him.

“I had pledged to support Mudavadi if he were  chosen to fly the Jubilee flag. Now that things have not worked for him, he should support me,” Wamalwa said on Friday during a campaign rally in Bungoma. 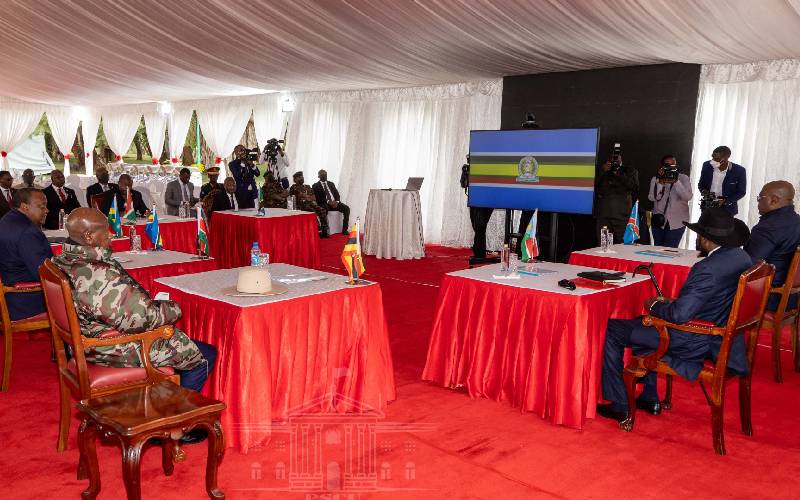 EAC Heads of States order deployment of Regional Force to DRC
The standby force shall be deployed to the Ituri, North Kivu and South Kivu provinces immediately ‘’to stabilise the zone and enforce peace in support of the DRC security forces.
Africa
By Patrick Vidija
8 days ago

Railway network can speed up bloc's growth
The Lake Region Economic Bloc (LREB) is planning to set up a railway network linking it to the national line.
Opinion
By Editorial
1 month ago

Lake region bloc draws plan to connect 14 counties to railway
The national railway line currently serves Kericho, Kisumu, Nandi, and part of Narok. But according to officials, the prospected rail line will serve the other counties.
Counties
By Stanley Ongwae
1 month ago

By Too Jared 3 4 hours ago
Azimio is not a political marriage of convenience, says Karua