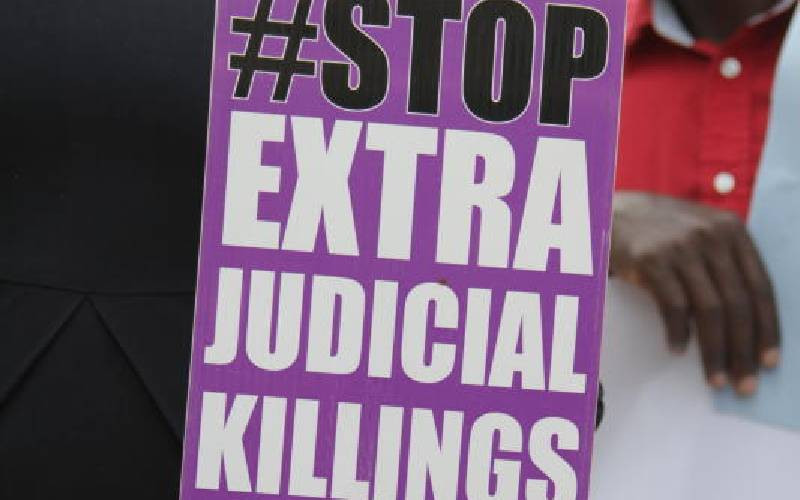 In the aftermath of the murders of Mohammed Zaid and Zulfiqra Ahmed, and their Kenyan driver Nicodemus Mwania, a lot is coming to light about enforced disappearances and extrajudicial killings. Almost a year earlier, it was reported that bodies were being dumped in gunny bags in  River Yala by unknown people. Investigations revealed that the 25 bodies found in the river were from surrounding and far-flung areas.

President William Ruto has publicly committed to ending enforced disappearances and extrajudicial killings. There have been shake-ups within the National Police Service, particularly the Directorate of Criminal Investigations. The Special Services Unit has been dissolved, and its members have been recalled for redeployment. Additionally, 112 police killings will be investigated by the Independent Policing Oversight Authority.

In this week's reports, it was revealed that SSU officers suspected of the extrajudicial killings and enforced disappearance of the two Indians and their driver shared graphic photos of the diseased with unnamed senior officers. Clearly, they were following instructions from someone who needed photos to prove the work.

Ahmed and Zaid were employed by Kenya Kwanza Coalition for purposes of the election. Therefore, their targeting and killing may have been politically motivated. We do not know what the perpetrators thought the victims had in their possession and how it related to the elections. The same way officers responsible for the killing of lawyer Willie Kimani, his client Josephat Mwenda, and Joseph Muiruri were apprehended, the Internal Affairs Unit linked the four officers through forensic evidence.

Though human rights advocates are pleased that extrajudicial killings and enforced disappearances are now being discussed at the highest levels of government, they wonder if the profile of the victims sparked the new focus. A noteworthy fact is that the vast majority of unlawful killings occur in poor urban areas like Mathare in Nairobi. Their marginalisation and poverty mean that they receive very little attention, which leads to widespread.

Kwekwe, Flying and Special Crime Prevention Unit, among others, were created to deal with "extreme" criminal activity, such as gang violence, urban crime, and terrorism. According to this rationale, those involved in violent criminal activities may not need to go to court.

Due to the proliferation of violent crime, the public often supports these measures. This approach, however, is contrary to the Constitution and international law, such as the International Covenant on Civil and Political Rights. In addition, evidence indicates that officers who work outside of the law become a law unto themselves and end up becoming rogues. It is not uncommon for them to moonlight, serve business interests, collect debts, settle scores for people, act as assassins and extort the citizens to fund their activities.

Extrajudicial killings and enforced disappearances are a stark violation of the right to life, the security of the person, the fair administration of justice and fair trial, and freedom from torture. As a result, society is denied the benefits of crime research, community and intelligence-based policing, which leads to arrests, prosecutions, adjudications, punishments, rehabilitation and reintegration.

There is no greater profession than police work, which involves dealing with people who can pose a threat to the public. Police officers are well trained and given firearms because there are times when lawful force is needed, including lethal force. By becoming criminals themselves, they cannot fight crime. As a result of extrajudicial killings and enforced disappearances, their victims will not have the opportunity to appear in court despite the fact that the four will have their day in court.