Yes, give the red card to leaders with questions on their integrity 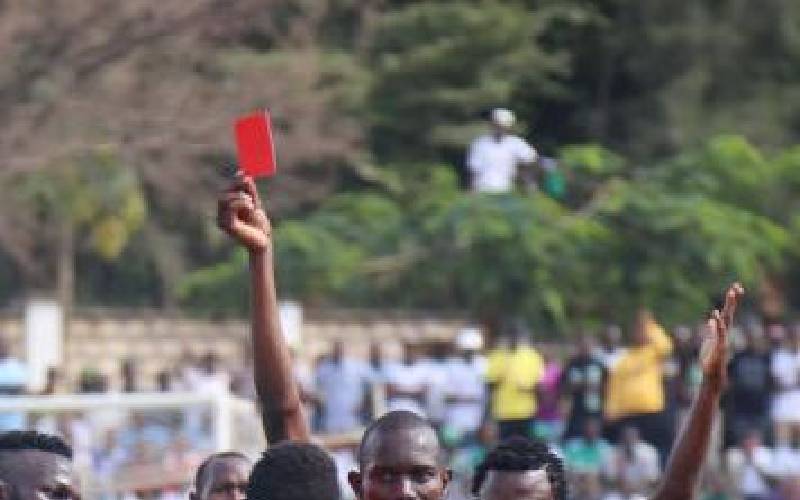 The 2003 remake of “The Italian Job” was one of my favourite films of all time. That is, until I started paying attention to the nexus between political leadership, elections, and grand corruption.

This week’s red carding of 25 political aspirants is timely. In the next few days, the electoral commission will issue clearance certificates to over 7,500 candidates to run in the August 9 General Election. Their choices will either further puncture Chapter 6 or restore its power.

Like most suspense filled action movies, “The Italian Job” focuses on the elaborate planning of a heist. It is a team movie with different characters working towards one objective. There is also the odd betrayal that necessitates the re-constitution of the team, and high speed chases in sleek cars.

Recent statements by the IEBC, EACC and the Interior Cabinet Secretary among others have left many wondering whether the primaries were a cover for a bank heist being planned in plain sight. There have been at least three steps to the plan.

In this context, The National Integrity Alliance list of 25 questionable aspirants was refreshing, bold and patriotic.

Directly calling on the electoral commission to deny them clearance certificates, they are also calling on voters to red card them publicly in all their rallies.

The 70-day #RadaNiIntegrity campaign uses the similar methodology deployed in 2017. Each of the three women and twenty-two men have been either adversely named by statutory agencies like the Auditor General, Ethics and Anti-Corruption Commission, Kenya National Commission on Human Rights, Director of Public Prosecutions, National Cohesion and Integration Commission or Parliament or have active or concluded cases for economic crimes, violence, abuse of office or other serious offences.

Reactions from state agencies have been mute apart from the now tired platitudes that Chapter 6 is legally unenforceable, and all suspects have the right to hold public office if their appeal processes are not exhausted.

Five years ago, advocate Willis Otieno documented 100 ways criminal suspects subvert the judicial process. Published as a comic book, it provided for tragi-comic reading. Less comical than the “100 ways to subvert the courts” playbook is what happened next for the twenty individuals’ red carded in 2017 elections.

Governors Ferdinand Waititu and Mike Sonko have since been impeached. Governors Okoth Obado and Anne Waiguru face new criminal charges. At least 60 of the 106 candidates named in the EACC’s own 2017 red card list who assumed public office are also facing grand corruption and other criminal cases.

The campaign is a call to voters to vet the performance of candidates and ignore their handouts. The argument is simple. Would you appoint a criminal suspect in charge of a bank or lend your car to that cousin whose own car has several dents?

Would you leave your infant in the care of a domestic worker with a history of anger management? Why do we apply a lower threshold for state officers responsible for the lives of millions?

Rejecting candidates with a trail of criminal cases doesn’t require the legal presumption of guilt. It is simply that some candidates are not ready to be trusted with public money and office.

The IEBC, other regulatory agencies and voters need not look further than Article 73 of the Constitution. The provision obligates state officers to exercise their offices in a manner that demonstrates respect for the public, brings honour and dignity and promotes public confidence and integrity.

Civic organisations have courageously risen to demand that the seeds of corruption do not grow into trunks of impunity. It remains to be seen whether those we fund as taxpayers will protect us from serial predators. In case they stumble again, let’s all print and prepare to flash our RED CARDS publicly! If corruption accountability and integrity is not the main campaign issue. We will all suffer, again.

KPA starts title defence as Zone Five event tips off
Basketball
By Ernest Ndunda
6 mins ago
Is it time to make a move on my male friend?
Relationships
By Chris Hart
27 mins ago
News quiz: How well do you know Eliud Kipchoge?
Quizzes
By Reina Kimeu
43 mins ago
PHOTOS: KDF joins rescue efforts after building collapses in Kiambu
Nairobi
By Dan Njenga
51 mins ago
.

By Reina Kimeu 43 mins ago
News quiz: How well do you know Eliud Kipchoge?