Working environment is too toxic for journalists

By Dinnah Ondari | 1yr ago 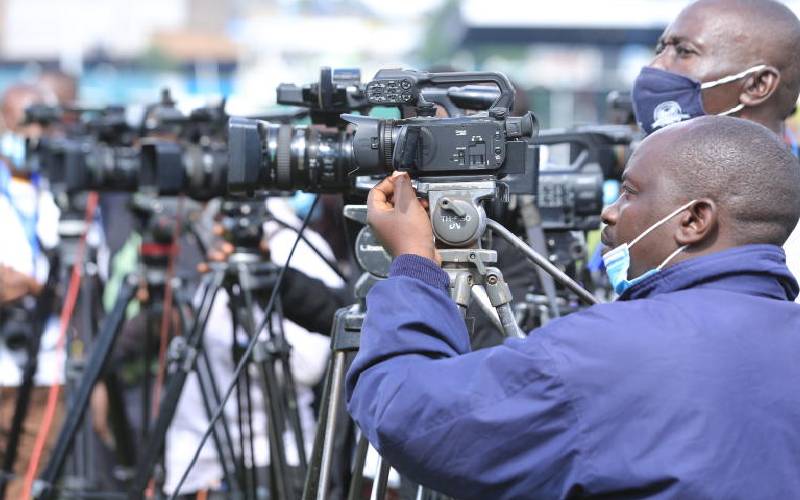 It is now cliche’ to refer to 2020 as a difficult year. The media especially took a hit from the harsh economic times leading to loss of jobs and salary cuts for staff. Industry think-tanks have been busy scouring for solutions to save the media from collapse.

But despite the threat to their sustainability, the media remained undeterred in their performance. Journalists remained in the frontline even when their pockets grew thin. Some contracted the virus, others lost loved ones while others were quarantined for interacting with infected news sources.

The Status of the Media survey 2020 released this month is evidence that the media will survive the pandemic if it hasn’t already.

The report found that the consumption of media content increased significantly during the pandemic, partly because of the lockdown and the fact that most people were working from home and needed to know more about the pandemic.

Although the report suggests that the findings could have been different if Kenyans were not at home, it is clear that audience trust soared during a time when the country was facing difficult times. The survey found that confidence in the media rose to 97 per cent with television and radio being the most trusted source of news standing at 74 per cent in terms of popularity for both platforms.

This was a slight increase in TV, which ranked at 73 per cent in 2019 and a drop for radio, which was ranked at 84 per cent last year. Social Media was the third most used platform with WhatsApp and Facebook being the most popular, used mostly for networking purposes followed by breaking news and entertainment.

As to whether the media have been innovative enough to reap from this popularity is debatable.

Away from media sustainability and economic upheavals, there is another elephant in the room: Safety threats against journalists.

2020 is the year it became clear that while sexual harassment was one of the subtle threats to press freedom, it is deep-rooted in the media environment. Sexual harassment is not only prevalent in newsrooms, but also outside. The Media Council of Kenya (MCK) in partnership with Article 19 released a survey on November 2, which revealed that 62 per cent of respondents had either experienced or knew someone who had suffered sexual harassment in the newsroom. The situation gets worse: Outside the newsroom, 73 per cent of the respondents spoke of the high likelihood of being sexually harassed by sources, news subjects and colleagues in the field.

But perhaps the most worrying fact was that up to half (49) per cent were uncomfortable to speak about their tribulations to their supervisors or persons in authority because of many factors; sometimes their supervisor is the perpetrator, embarrassment, normalisation of the vice and victimisation, just to name a few.

It is ironic that in an industry that speaks for the voiceless, works to protect the rights of others, a vice as grave as sexual harassment continues to thrive under a cloud of silence. Silence protects the perpetrators while subjecting victims who cannot find an outlet for their anger and frustration, even justice, to torture.

MCK has been partnering with media houses and other interested institutions to formulate and implement practical gender harassment policies and create a safe space for victims to speak out.

Out of nearly 90 violations documented by MCK, physicals attacks involving assault, destruction of equipment and other forms of harassment account for over half. But the single most cause for worry is the dozens of incidents where police were named as the perpetrators. By November 2, 2020, when MCK was releasing a report on violations against media during the Covid-19 period, police accounted for the largest number of attacks in various counties led by Nairobi, Turkana, Kiambu, Mombasa and Nakuru.

As a public institution that monitors and documents such violations, close scrutiny of the trends reveals that most of the attacks by the law enforcers can be avoided through fostering of understanding between not only police but also all other public officers who are custodians of public information that media requires from time to time.

MCK and its partners through Media Information Literacy forums create awareness on the need to respect freedom of media, the right to information and expression as per article 33, 34 and 35 of the Constitution. For these interventions to succeed, there must equally be a change of attitude both among the journalists, news sources/subjects and the public in general.

With the BBI discourse and the impending referendum, not to mention that 2021 is a pre-General Election year, nothing less than mutual respect for the rights and obligations of both the supply and demand side of the right to information and a general culture of respect for all human rights will ensure a conducive environment for the media.

Ms Ondari is the manager, Press Freedom, Safety and Advocacy at the Media Council of Kenya